PV auction designer hopes to keep citizens' projects on board

Renewables Renewable Energy Act | EEG 2014 Citizens' energy
Feed-in tariffs set by government or parliament have supported rapid expansion of renewable power production, along with falling costs. Now the government wants to move to a more market-based approach. With this is mind, the 2014 changes to the Renewable Energy Act (EEG) brought in auctions to determine the price guaranteed for solar plant operators. The first tender for large photovoltaic (PV) installations has just been completed. Professor Karl-Martin Ehrhart, an expert in auction theory at the Karlsruhe Institute of Technology (KIT) and one of the developers of the tender system now being piloted, gave the Clean Energy Wire his assessment.

CLEW: Professor Ehrhart, one of the arguments for switching from administratively determined feed-in tariffs to auctions is to keep the costs for renewables down – but the first round has resulted in slightly higher payments than the current feed-in tariff for power from free-standing PV installations. Is the new system failing to fulfil its purpose? 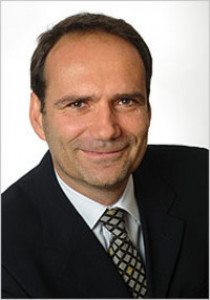 Karl-Martin Ehrhart: First of all, I want to say that the first ever round of PV auctions has delivered an outstanding result and I believe it’s wrong to summarise the outcome under the headline “auction tariffs are even higher than the current feed-in remuneration.”
We have to bear in mind that the market for ground-mounted solar installations all but collapsed recently. The extreme solar development between 2011 and 2013 caused feed-in tariffs to drop to a very low level in the past year, meaning that many new PV projects were not financially feasible. Taking this into account, it is a huge success that the average tender in the first round of auctions stayed well below the set maximum price of 11.29 cents per kilowatt-hour (ct/kWh).
Another definite success of this round of tenders is that the auctioned capacity was highly oversubscribed. However, we have to admit that many developers had previously prepared projects ready, which they decided to enter into the auctions after feed-in tariffs fell so dramatically. Taking this into account, I am actually a little surprised that the average auction price of 9.17 ct/kWh is so close to the latest feed-in tariff of around 9 ct/kWh.
Honestly, it’s still early days and we’ve only seen the very first round of tenders, so we really have to monitor how the coming rounds turn out before we can properly assess the new system. It’s also likely that fewer and fewer of ready-prepared projects will participate. And of course, future bidders will now have a point of reference in the price achieved in April and can judge whether they are able to compete at this level.

At the moment, PV park developers can still choose to install their plants under EEG conditions and receive the currently applicable feed-in remuneration of around 9 ct/kWh. Didn’t that result in a kind of price floor in the first auction period?

A transitional rule was necessary so that project developers who had been planning, or even started building PV installations under the assumption that they would receive a certain feed-in tariff, were given security for their investment. But installations that begin operating after 1 September will only receive financial support if they successfully participated in the auctions. This gave businesses with solar parks that are ready to become operational right away the option to enter their project into the auction to achieve payments higher than the current EEG feed-in tariff. But for all new projects, even if planning was already in advanced stages, this was hardly an option because preparations and construction take time. For this reason, I don’t think the effect of the overlap between the first round of auctions and the feed-in tariff system is very relevant.

One concern over the new auction system has been whether small, local renewable projects can compete with the big players. The first round has seen one developer awarded over 40 percent of the auctioned capacity. Does that mean fears of the end of citizens' energy have been realised?

I see this outcome as a mixed blessing. When we designed the auction mechanism we had to adhere to two objectives that are not necessarily compatible. One objective was efficiency and creating a system that would favour those bidders who offer the most inexpensive solar power. Following this notion, it doesn’t matter whether it’s one big company or many different ones who operate the PV parks. But at the same time, we had actor-diversity as an objective, so the system has to make sure that everyone, including smaller companies and cooperatives, could participate in the tenders.
We will have to see if things change in the next round of auctions, with a wider range of companies awarded tenders. But I don’t think the current outcome is dramatic because the 25 winning bids came from a very heterogenic group of providers. It would be premature to take action after this first round of auctions. But I certainly hope that small actors will not be deterred from participating.

For the following two auction rounds this year the system will be changed from the current “pay-as-bid” mechanism to a “uniform pricing” scheme – what impact is this expected to have on prices and participants?

In the end, the two mechanisms are likely to bring about a very similar price. The benefits of the uniform pricing system – where the highest winning bid sets the price for all other successful projects – are a more consistent price signal and easier administration. The advantages of pay-as-bid are that it is easier to understand and comes more naturally to less experienced bidders, and it is less prone to manipulation by big bidders. It’s clear that in this last round, large bidders tried to manipulate the price but it didn’t work because even if they participated with several projects, the pay-as-bid system prevented them from winning with more than a few of them.
Other questions, like the limit on the space available for PV installations – which has been pushed through by the farmers’ association – are much more pressing than the intricacies of what auction design will be used.

What is the effect of the limit on land eligible for ground-mounted solar panels, and why was it important for farmers?

Limiting the use of farmland for PV installations considerably reduces the possibilities of building new solar parks. There is plenty of arable land that is very suitable for ground-mounted PV, and few suitable alternatives. This limitation will affect the overall competition and result in higher operating and support costs. It may even endanger the solar power development target. These are very negative effects and I don’t really understand the farming lobby’s reservations. The argument that PV parks could push up prices for farmland or limit its agricultural value is unfounded. Even if all envisaged PV installations were built on arable land, they would occupy only around 0.003 percent of German farmland. To reach the PV development target, between 600 and 700 hectares would be needed annually – that’s roughly the amount of space allocated for settlement or transport infrastructure in Germany every week.