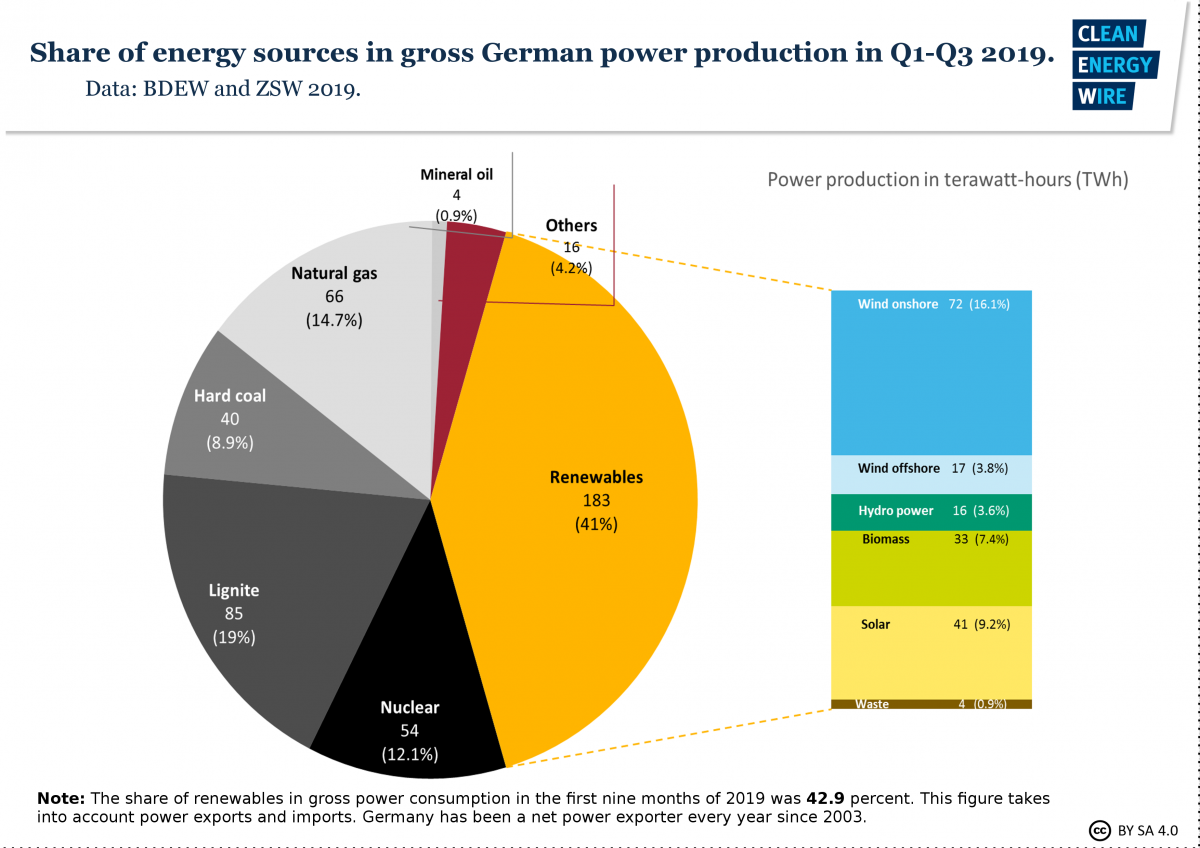 The share of renewable energy in Germany's gross power consumption reached a record of almost 43 percent in the first nine months of 2019. But a near halt in the country's onshore wind power expansion overshadows the achievement, putting the energy transition target of a 65 percent renewables share by 2030 at risk.

Renewable energy made up a record 42.9 percent of Germany's gross power consumption during the first nine months of 2019, preliminary figures from utilities association BDEW and research foundation ZSW show . Compared to the first three quarters of 2018, the share of renewables in consumption rose by five percentage points (38.1% in 2018). Renewables also produced almost 50 percent more power than hard coal and lignite combined. In the same period last year, renewables and coal made up around the same share of production.

Although 43 percent is a "very positive" share, it "stands in sharp contrast to the dramatic situation in the expansion of wind energy," said head of BDEW Stefan Kapferer, warning that Germany's target of a 65 percent share in consumption by 2030 was at risk. A study by consultancy Prognos, commissioned by engineering association VDMA Power Systems and presented on the same day, says that German onshore wind power's "success story is currently in danger". With only 0.5 gigawatts (GW) of newly installed capacity in the first nine months of 2019, 2.4 GW in 2018 and 5.3 GW in 2017, onshore wind power expansion has seen a "dramatic slump". 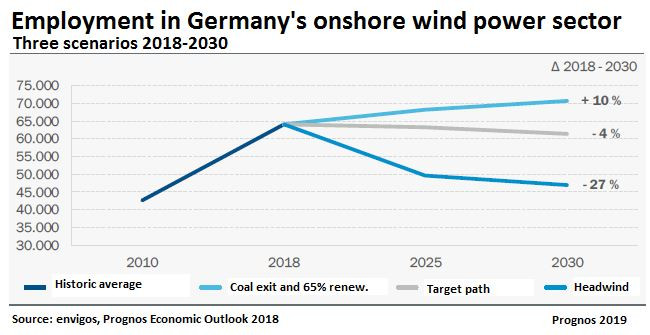 Onshore wind power is a key element of Germany's energy transition and a leading force in the country's renewables industry. But a lack of space and increasingly restrictive distance regulations between wind turbines and residential areas means the industry is "sliding into a real recession", said Kapferer. "If politicians do not finally loosen the brakes on the expansion of wind farms, we will crash and miss the 65 percent target," he added.

Wind industry cannot "be turned off and on like a faucet"

The last six onshore wind power auctions in Germany have been undersubscribed. In September, bids were submitted for only 35 percent of the 500 megawatts (MW) tendered, writes Prognos in its study. The consultancy developed three different scenarios for onshore wind power expansion until 2030. Under the scenario that extrapolates current trends, labelled as "headwind", expansion would continue at a low level of about 1 gigawatt (GW) per year. This would mean that up to 27 percent of the jobs directly linked to the industry could be lost, resulting in "massive consequences" for the competitiveness of German production facilities and possible relocation abroad, the study says.

In a more positive scenario that is based on the current political expansion target of 73 GW total installed capacity in 2030, employment would shrink by four percent. In the most optimistic scenario that takes into account compensation effects for Germany's planned coal exit and the target of having a renewables share of 65 percent in power consumption at the end of the next decade, employment could grow by up to 10 percent. Annual expansion in this case would have to reach 4.7 GW.

VDMA Power Systems CEO Zelinger said the industry in Germany would have a hard time enduring a prolonged expansion slump and stressed that there is severe competition among neighbouring countries to woo wind power investments. Production in Germany is more expensive than in many other locations and so far benefits from historically grown infrastructure and retail systems that still give the country an edge when it comes to attracting investments. Zelinger said the economy ministry's action plan already addresses many of the challenges and urged the federal government and the states to guarantee legal certainty for project developers. "We have to do away with the idea that an entire industry can be turned off and on like a faucet whenever the mood is changing or the next election is around the corner."

Germany’s economy and energy ministry together with the federal states recently presented a plan to break the deadlock in wind power expansion, promising a slew of regulatory changes. In its newly agreed climate action programme, the German government said municipalities would receive part of the profits generated by turbines built on their land. But it also said turbines must maintain a minimum distance of 1,000 metres from the nearest residential area.