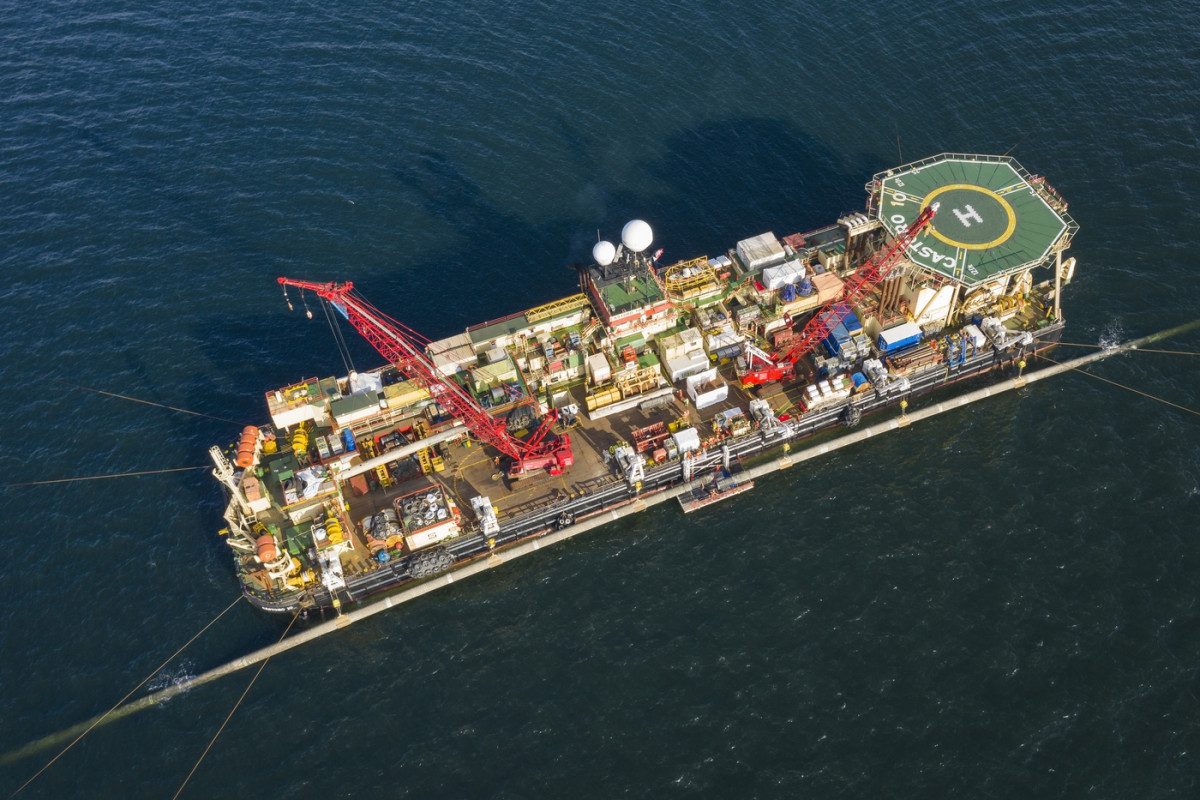 A German state government attempts to circumvent looming U.S. sanctions on the contentious natural gas pipeline Nord Stream 2 with the help of a “climate” foundation. Mecklenburg-Western Pomerania, where the pipeline will land, announced the manoeuvre would help shield companies involved in the construction. The foundation’s official use will be for funding environment and climate projects. To justify its purpose of finalising Nord Stream 2, the pipeline is highlighted as a special contribution to energy security and the energy transition "bridging technology” natural gas. The Nord Stream 2 AG has agreed to put up an initial 20 million euros. NGO Environmental Action Germany criticised the plans and said they would fuel the climate crisis.

The government of northern German state Mecklenburg-Western Pomerania has announced it wants to set up a state-owned “climate” foundation, hoping to avoid U.S. sanctions on companies involved in the completion of the contentious natural gas pipeline Nord Stream 2.

The coalition of Social Democrats (SPD) and chancellor Angela Merkel’s conservatives CDU aims to use the so-called “Foundation for climate and environment protection” to quickly buy and store products needed for the pipeline’s completion, such as building materials – thus shielding selling companies from future sanctions. The materials will later be made available for the construction. Mecklenburg-Western Pomerania lies on the Baltic Sea, where the pipeline will be connected to the German grid.

An initial sum of 20 million euros will be paid into the foundation by the Nord Stream 2 AG, which is wholly owned by Russian energy company Gazprom, and is constructing and plans to operate the pipeline. The state will put up 200,000 euros. The plan has yet to be greenlighted by the state parliament (planned for 7 January) and regulators. The government said the foundation could be up and running within days.

The government defended its decision to establish its plans as a climate action foundation.

“We are firmly convinced that the Baltic Sea pipeline is necessary for the success of the energy transition,” said state premier Manuela Schwesig at a press conference. “If we are to phase out coal power and nuclear energy, then we need a transition technology.” The foundation offered the chance to contribute to the completion of this “bridging technology” should talks between the EU and the US administration not avert sanctions.

As calls for stronger climate action have grown in recent years, the gas industry has increasingly offered its product as a cleaner alternative to oil and coal and a supporting act for wind and solar energy during the transition to a climate friendly society. The advantage of natural gas in terms of climate change is disputed. It not only emits CO₂ when burned, but is mainly composed of methane, making it a powerful greenhouse gas itself. Emissions along the entire production-transport-use value chain are substantial. Critics also warn that betting on gas for short-term CO2 cuts will perpetuate its use and make it harder and more expensive to reach carbon-neutrality further down the road. Natural gas is a fossil fuel.

NGO Environmental Action Germany (DUH) called on the state parliament to decide against the foundation. “The foundation is a front organisation whose sole purpose is to further the construction of Nord Stream 2,” said managing director Sascha Müller-Kraenner. Instead of protecting the climate, the foundation will “fuel the climate crisis", he said, and added that German and European climate targets are threatened by the pipeline.

State energy minister Christian Pegel said that natural gas is necessary for the success of the energy transition and will “hopefully be overcome in 20-25 years.” He said he hoped that regulators give the greenlight and the foundation can start operating in a couple of days. The foundation itself might become a target of sanctions, he said. “For the foundation however, sanctions would be irrelevant because it will never again – unlike the companies – participate in any pipeline construction in the world.”

“Is it really worth sinking 11 billion euros that have already been built in the Baltic Sea?”

The pipeline has been contested since the early planning stages. The project would allow additional Russian gas to flow directly to Germany. Proponents argue the pipeline is a commercial investment that is key to Europe's supply security, while opponents criticise Nord Stream 2 on environmental, geopolitical, and security grounds. Around 160 km of Nord Stream 2’s pipeline, most of which will be in Danish waters, still needs to be completed. Construction was halted in December 2019 after the US enacted a sanctions bill affecting companies working on the pipeline, but it is reportedly set to resume mid-January 2021.

“We know that not everyone is enthusiastic about this project,” said state economy minister Harry Glawe. “But I would like to ask the critics whether it is really worth sinking 11 billion euros that have already been built in the Baltic Sea and not securing any energy alternatives - at least via the Russian market - for Europe in the future.”

Schwesig said she hoped the US will roll back sanctions: “It is dishonest to buy oil from Russia and to want to prevent a gas pipeline for Germany and Europe.”

However, even a new Biden administration is unlikely to change the US’s stance on the issue. The US Congress just days ago decided on a new measure allowing the government to impose further sanctions against companies even remotely involved in construction. Following the decision, Norway-based quality assurance company DNV GL has said it will no longer provide pipeline integrity verification services for Nord Stream 2. S&P Global Platts Analytics pushed back its start-up assumption for the pipeline to the third quarter of 2021.