Climate & CO2
After months of heated debate, the German government has finally struck an agreement on its contentious Climate Action Plan 2050, due to be signed off by the cabinet over the weekend. It includes emission reduction targets for transport, the energy industry and other sectors. However, the action plan’s wording on the role of coal-fired power generation has been weakened following protest from the sector. Environmental organisations warn that the new plan is not enough to help Germany reach its Paris Climate Agreement targets.

A final draft, seen by Clean Energy Wire, includes CO₂ emission reduction targets for the year 2030 for individual economic sectors, a key demand from environmental activists. This is contrary to earlier versions of the environment ministry’s plan, which had been watered down by resistance from other ministries.

But even with the targets earmarked in the new agreement, Germany is poised to miss its Paris Climate Agreement goals, according to Greenpeace.

“Basically, all of this is not enough to reach the goals laid out in the Paris Agreement. These targets for 2030 are much too low. But it is decisive progress that each individual sector received specific targets,” Greenpeace energy expert Tobias Austrup told Clean Energy Wire.

Recent ministry projections show that Germany is likely to miss its target of cutting greenhouse gas (GHG) emissions 40 percent by 2020, compared to 1990 levels.

The protracted struggle to agree on the Climate Action Plan had commentators worried that Germany’s days as a climate protection pioneer might be over.

In the energy sector, the targets contained in the Climate Action Plan imply a de facto coal exit by 2030, said Austrup. “We are looking at reducing today’s emissions in the energy sector by about half until 2030. That basically means no coal power plant can be online by then.”

The share of wind and solar power in total power generation “will rise significantly”, while the plan confirms the renewables development targets laid out in the reformed Renewable Energy Act (EEG).

The federal government continues to see the EU Emissions Trading System (ETS) as the main climate protection instrument for Central Europe. A provision in earlier drafts of the climate plan calling for a floor price for ETS certificates was removed from the plan. 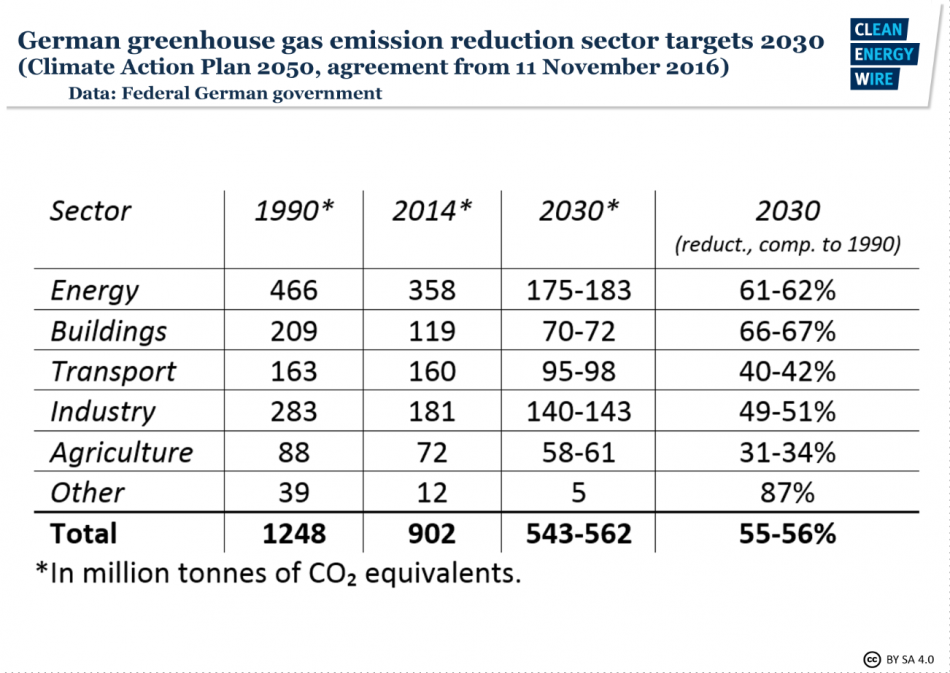 The targets for the transport sector laid out in the plan would also signal an end to fossil-powered car engines, according to Austrup: “These targets herald the end of the combustion engine.”

Industry will have to reduce its emissions by roughly 20 percent compared to 2014.

However, the long-awaited plan is due to be reviewed and could be tweaked in 2018, with sector targets “subject to a comprehensive impact assessment,” according to a government spokesperson.

Germany industry voiced its concern about the plan, saying it could dent competitiveness.

“In order for [German] climate policy to set the standard around the world, it has to be manageable for businesses and allow them to remain competitive,” president of the Association of German Industry (BDI) Ulrich Grillo told The Guardian. “That’s why we reject arbitrary and tonne-high reduction targets for individual sectors.”

Disagreements among politicians about the future of coal held up the document which was originally slated for publication during the summer. Friday’s agreement emphasised that the economic outlook and jobs in affected regions, like east German Lusatia, must be taken into account. “We must succeed in establishing concrete perspectives for the future of the affected regions, before concrete decisions on the step-by-step withdrawal from lignite industry can be taken,” the plan stated.

“Only if we connect climate protection with saving industrial jobs also in the energy industry, will other countries follow us in our very ambitious climate policy,” said economy minister Sigmar Gabriel in a press release.

German mining union IG BCE, with the support of the large BDI industry group, had worked hard to block the plan. In particular they objected to plans for a commission to focus on Germany's exit from brown coal.

The new agreement includes a commission for “Growth, Structural Change and Regional Development”, but it is not tasked with pinpointing an end date for German coal. Instead, it is designed to “support the structural changes” brought on by the country’s transformation and will “develop a mix of instruments that will bring together economic development, structural change, social acceptability and climate protection.”

The commission will be established by the federal economy ministry and involve other ministries, the federal states, municipalities, unions, representatives of affected companies and regional actors. It will not start working until 2018.

Greenpeace’s Tobias Austrup criticised the tardy start date of the commission. “Precious time is lost and with this decision, economy minister Gabriel delays the structural change that he wants to support,” he said.

A regional fund will be established to finance the projects aimed at investments and establishing new business in the lignite mining regions. The German government will ensure that EU competition law will not be an obstacle to such a fund. “It is in the interest of the whole of Europe that Germany realises its disproportionately high share in Europe’s climate protection,” the plan said.