Germany holds climate summit to increase momentum ahead of COP26

The latest pledges for greenhouse gas reductions by large emitters like the EU and the U.S. are making a difference in predicted global temperature rise and “show progress and a great need for action,” Germany’s environment minister Svenja Schulze said ahead of the 12th Petersberg Climate Dialogue, held virtually in Berlin this week. As calculations by Climate Action Tracker showed that net-zero emission plans are taking hold in a growing number of countries, they also stressed that only immediate action in the next decade will ensure to stay within the warming limit of 1.5°C. Schulze said that thanks to technological developments in energy generation, transport and industry, more countries were feeling confident that emission reductions are possible. Germany is also holding the international ministerial meeting in Berlin to prepare progress on technical issues such as reporting obligations for greenhouse gases or the question of how emission reductions are traded and credited ahead of the UN climate summit COP26 in Glasgow in November. On 6 May, the Petersberg Climate Dialogue will be attended by UN Secretary-General Antonio Guterres, Chancellor Angela Merkel and British Prime Minister Boris Johnson. NGOs said the summit will be Merkel’s last chance for big climate policy announcements. [Update adds NGO statements on Merkel's "last chance"]

Recent climate target pledges by countries under the Paris Agreement have brought down the projected end-of-century warming by 0.2 degrees Celsius to 2.4°C, Climate Action Tracker (CAT) announced at the press conference. The number of countries adopting or considering net zero targets has increased to 131, covering almost three-quarters of global emissions, Niklas Höhne of the NewClimate Institute, who established the CAT together with NGO Climate Analytics, said. In their most optimistic scenario, assuming the implementation also of additional net-zero target pledges not yet submitted to the UNFCCC, global warming will reach 2°C by the end of the century.

“These figures show a development. They show progress and a great need for action. Progress is possible, it is real, it is worth the effort,” environment minister Schulze said. Since the Paris Agreement, countries have become more convinced and ambitious in their climate action, Schulze said. “Of course, I will only be satisfied when climate neutrality is really within sight,” she said. But since 2015, many technological developments, such as cheaper renewable energies, e-mobility or green steel production, have given governments more confidence in being able to tackle decarbonisation, Schulze said, adding that in her view, in five years’ time they would be even more confident in their ability to achieving climate neutrality. 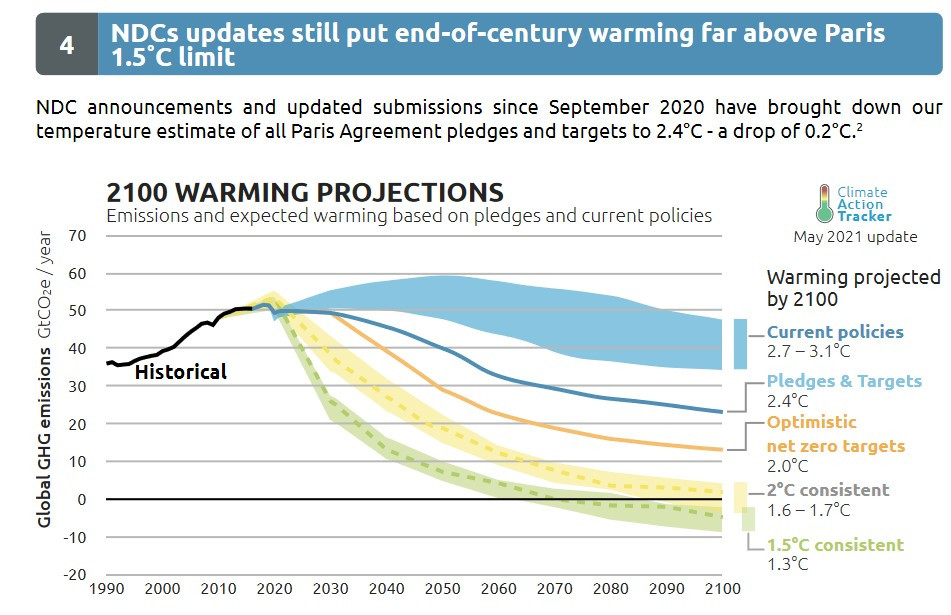 Global greenhouse gas emissions from Pledges and Targets, Current Policies and the Optimistic Targets scenarios. This estimate for the Current Policies scenario is based on our September 2020 assessment. Source: Climate Action Tracker, May 2021.

The Paris Agreement includes a system whereby signatories have to submit a new, more ambitious climate action target every five years and COP26 in Glasgow will be their first meeting since governments were expected to do so. Höhne said that while some emitters like the EU and the U.S. but also Canada and the UK had submitted new targets, other countries had actually retracted in their ambition or not included any additional efforts. Large emitters, such as Indonesia and India, have until the end of the year to hand in their plans. However, to achieve a 1.5°C warming maximum, global emissions had to be halved by 2030, Höhne added. “Only if all governments flip into emergency mode and propose and implement more short-term action can global emissions still be halved in the next ten years as required by the Paris Agreement,” said Höhne.

Resolving the last technical details of the Paris Agreement

The German government wants to use the ministry-level meeting at the Petersberg Climate Dialogue - which is held virtually in Berlin - to advance negotiations about the technical but important details of the Paris Agreement that still need to be finalised. This includes questions on emission reporting standards and obligations for all countries and the trading and crediting of greenhouse gas reductions between countries, Schulze said.

Another very important subject in Berlin is the implementation of climate finance – countries of the global south have been promised 100 billion USD per year by developed nations, to help them with climate change mitigation and adaptation. However, the COVID-19 pandemic has drastically altered the context for international climate action and finance, and it is unlikely the target was met last year.

“We want to conclude these important questions in Glasgow,” Schulze said, stressing the importance of getting the discussion going again after a year of little progress due to the pandemic.

A central component of the meeting is the public high-level segment on Thursday, May 6, with the participation of UN secretary-general Antonio Guterres, chancellor Merkel and British prime minister Boris Johnson.

Countries’ pledges for more climate action ahead of COP26 are the first test of the so-called “ratchet mechanism,” a cornerstone of the Paris Agreement designed to increase climate ambition over time. Based on the NDC Synthesis Report from March 2021, the UN said all nations must step up efforts to reduce climate-harmful emissions to meet Paris Agreement goals. Countries are also expected to have handed in their long-term decarbonisation visions for mid-century by the time of the COP.

Chancellor Merkel has traditionally used the Petersberg Dialogue for bigger announcements on climate. This will be her last chance to do so one more time, as it will be the last such event under her watch. NGOs have said they want Merkel to announce an increase in Germany’s climate finance.

The summit will be chancellor Merkel’s last chance to make big climate policy announcements, said NGO Germanwatch. “With the climate policy tailwind that the chancellor has now received from the climate ruling of the Federal Constitutional Court, she could set an exclamation mark at tomorrow's [6 May] Petersberg Climate Dialogue,” said policy director Christoph Bals. This would have to be a message on significantly raising the country’s 2030 climate target, and a clear and long-term commitment to significantly increase financial support for climate action and adaptation in the Global South. “Chancellor Merkel should announce a gradual doubling of German climate financing to eight billion euros per year by 2025.”

Other NGOs, such as Oxfam and Climate Alliance Germany, also called for a doubling of German climate finance. “A commitment by chancellor Angela Merkel to significantly increase climate aid in the coming years is the litmus test for Germany's responsibility and solidarity towards the countries of the Global South, where the climate crisis is already massively exacerbating poverty, hunger and injustice,” said Oxfam’s Jan Kowalzig.