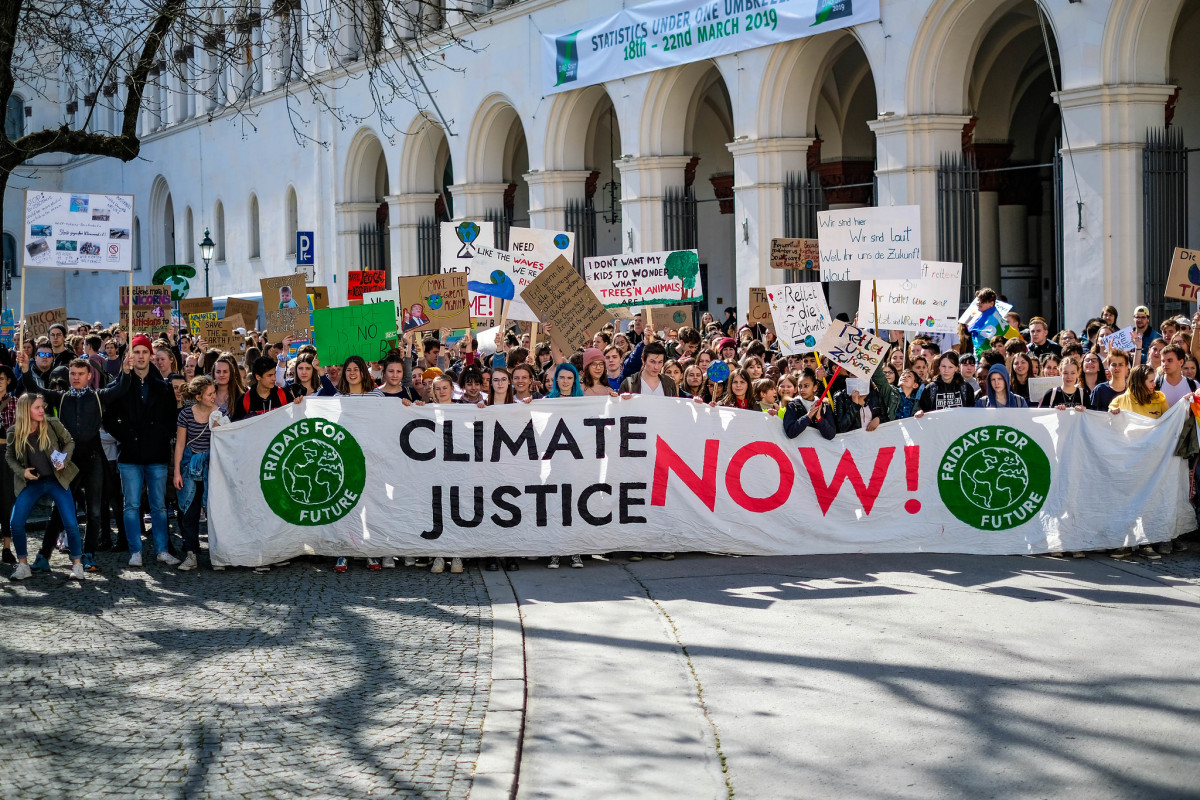 Germany's Federal Constitutional Court has ruled that the government has to have a more detailled plan how to reduce emissions as of 2030 to not put the largest burden on today's young people. Photo: FfF.

In an unexpected decision widely hailed as historic, Germany's highest court has ruled that the government's climate legislation is insufficient, lacking detail on emission reduction targets beyond 2030. The decision “significantly strengthens” climate action by ruling that if the government fails to protect the climate, it could violate citizens’ fundamental rights, legal experts said. Youth activists, who had lodged the complaint to force the government to do more to mitigate climate change, said the ruling was a timely decision ahead of Germany's federal election this year. Conservative and Social Democratic ministers from the ruling grand coalition government blamed each other for the lack of post-2030 clarity and promised they would present reform proposals. However, it is likely the task of finding a solution will be up to the next government after the September general election, which could catapult the Green Party to power. [Update adds background, additional reactions]

Germany’s Constitutional Court has found in a landmark ruling that key parts of the country's climate legislation are insufficient. The court said Germany's Climate Action Law is partly unconstitutional and obliged the government to introduce details on greenhouse gas reduction targets for the period after 2030 by the end of next year.

"The challenged provisions do violate the freedoms of the complainants, some of whom are still very young," the court said in a statement with reference to climate activists who had filed the complaint with support from several environmental NGOs. "The provisions irreversibly offload major emission reduction burdens onto periods after 2030."

Legal experts said the decision is unexpected and unprecedented in Germany and will have far-reaching effects. “Climate action has been significantly strengthened by the Federal Constitutional Court today,” Thorsten Müller, head of Stiftung Umweltenergierecht (foundation for research on energy and environment law), told Clean Energy Wire. “So far, we have not had any successful lawsuits for more climate action in German jurisdiction.”

He called the decision “historic,” as for the first time the court made very clear that a violation of the state’s obligation to protect the “natural foundations of life,” which it said includes climate protection, could constitute a violation of the fundamental rights of citizens. Citizens now have a process to sue, but lawsuits for more climate action “are unlikely to succeed in most cases, unless we are in the situation where the state violates its objective duty to protect,” he explained. Concrete climate policy would still be decided in the political process.

The German court's decision follows a rising number of similar cases across the world. In the first decision of its kind, the Netherland's Supreme Court in 2019 upheld a ruling by a lower court forcing the government to meet emission reduction targets. The case not only inspired German activists, but also similar climate justice lawsuits in many other countries, including Belgium, France, Ireland, New Zealand, Britain, Switzerland and Norway.

Climate action is not ‘nice-to-have’ – activist

Müller said he was greatly surprised by the ruling. "If you had asked me before, I would have said that this lawsuit has no chance of success.”

Germany’s current governing coalition of chancellor Angela Merkel’s conservatives (CDU/CSU) and the Social Democrats (SPD) introduced the country’s first major climate law with binding emissions reduction targets for the 2020s as part of a comprehensive package of measures in 2019. The package was meant to ensure that Germany reaches its 2030 targets, but the climate action law also included a line on “pursuing” the long-term target of greenhouse gas neutrality by 2050. However, it postponed the decision for emissions reduction targets post-2030 to a later date.

Climate activists welcomed the ruling. "Climate action is not ‘nice-to-have’, it’s our fundamental right and from today we know that officially," said Lisa Neubauer, one of the leading figures of Germany's Fridays for Future protest movement, at a press conference after publication of the ruling. "It gives us everything we need for this year, for this federal election campaign, and for our future work as a movement.”

Neubauer and several other activists, supported by NGOs Germanwatch and Greenpeace, had sued the German government in early 2020 over what they said was its insufficient action to tackle climate change. It was one of several lawsuits filed then, which CDU lawmaker Jan-Marco Luczack had dismissed as a good “PR gag.” A first similar lawsuit against the federal government was filed by three farming families with the help of Greenpeace in October 2018. The Berlin Administrative Court dismissed that suit.

The immediate consequence of the ruling is that the German legislator must regulate the continuation of the reduction targets for the post-2031 period by 31 December 2022 at the latest. This does not mean annual sector reduction targets until 2050, when climate neutrality is to be reached, cautioned Müller. However, “there must be points of reference, that is the core message of this ruling, in order to be able to precisely assess how we get from today to the goal of climate neutrality.” The court also did not rule that the targets until 2030 have to be adapted.

The court said Germany’s Basic Law – the country’s constitution – obliges the state to protect the climate, which includes reaching the target of climate neutrality. The court did not prescribe when or how this goal should be reached, but said the German government had already decided to try to limit global temperature rise to well below 2°C and preferably to 1.5°C above pre-industrial levels, as prescribed by the Paris Climate Agreement. The court argued that the emissions reduction provisions in the climate law violate the complainants’ freedoms guaranteed by Basic Law.

To reach the Paris targets, the post-2030 goals would have to be achieved faster and more urgently, it said. “These future obligations to reduce emissions have an impact on practically every type of freedom because virtually all aspects of human life still involve the emission of greenhouse gases and are thus potentially threatened by drastic restrictions after 2030,” said the court, adding that the legislator should have taken precautionary steps to mitigate these major burdens in order to safeguard the freedom guaranteed by fundamental rights.

This is the second aspect that makes the decision historic, said legal expert Müller. “We are always talking about budget approaches in the area of climate action,” he said. Now the Federal Constitutional Court added a new dimension to this by not only saying there is a global emissions budget that must be divided up among states. “No, there is also a generational climate action budget within the countries.”

Lawyer Hermann Ott from environmental organisaton ClientEarth also saw this as a key part of the ruling. “For the first time, a German court has accepted that we have a limited climate budget left and that the constitutional duty to protect future generations is engaged.” If the mitigation of greenhouse gas emissions is not fairly distributed over the next 30 years until 2050, “there may be disproportionate impacts on the fundamental rights of future generations," Ott said. "The court has now recognised this and made it clear to the government that climate debts cannot be postponed.”

Government representatives from conservatives and Social Democrats entered a sort of blame game after the publication of the ruling. Environment minister Svenja Schulze (SPD) said she would have liked to include another interim target for the 2030s, “but there was no majority for this” in the negotiations in 2019. Her Social Democrat colleague and chancellor candidate Olaf Scholz publicly criticised CDU economy minister Peter Altmaier: “To the best of my recollection, you and the CDU/CSU have prevented exactly what has now been called for by the Federal Constitutional Court. But we can quickly correct that. Are you with us?” Schulze said she would present key points for a reform of the climate law in summer.

Altmaier did not talk about the 2019 negotiations, but replied that he already proposed post-2030 interim targets in his call for a “historic consensus” on climate among all German parties in September 2020, which in turn was not answered by the SPD.

At a press conference, Altmaier said that the ruling was of “extraordinary importance” for climate protection, the rights of young people and for the planning security of German businesses. “We have set into motion many things in the past years. Some of them came late, maybe too late,” Altmaier said. He added that the ruling must be respected and implemented. “I see this ruling as a gift, because it means that climate action is put back on the agenda before the general election.” He said he would present his fellow ministers with suggestions in the coming weeks on how the government could ensure that climate policy making wasn’t delayed by the elections and the ensuing creation of a new government.

German parties have swung into full campaign mode for the national election in September, after both the Conservatives and the Green Party presented their chancellor candidates last week. This also means that a decision on the reform of the climate law will be up to the next government, in which the Greens could play an important role, maybe even providing the chancellor.

The party’s candidate, Annalena Baerbock, welcomed the ruling. Calling it a "historic decision" on twitter, she wrote that it gave a concrete mandate to revise the climate action law now. "Climate action protects our freedom and the freedom of our children and grandchildren [...] The next few years are crucial for consistent action," she said.

“Meanwhile, the Greens' chancellor candidate floats serenely above it all, hailing the ‘historic decision’,” commented journalist Tom Nuttall on Twitter.

German stakeholders largely welcomed the ruling as a push for more clarity and ambitious climate action. German industry federation BDI highlighted the need for planning security for companies it represents. "In a transparent way, policymakers must outline viable climate paths up to 2050 in order to specify CO2 reductions. This creates clarity and planning security for companies to develop new technologies and invest massively, and is in the interest of industry,” said BDI in a statement.

Ingbert Liebing, head of the German association of local utilities (VKU), also welcomed the decision. “The ruling increases the pressure to create clear and more reliable framework conditions for climate protection in the long term,” Liebing said. “Municipal enterprises are already making a variety of contributions to climate protection today, but for this they need reliable framework conditions from politicians - as the judges in Karlsruhe have clearly demanded today."