Germany aims to use a large international energy conference in Berlin to inject fresh momentum and ideas into the G20 process in the run up to the Hamburg summit in July. "We want to use our G20 presidency this year to find a common position for all G20 countries to contribute to the long-term decarbonisation of the energy sector," foreign minister Sigmar Gabriel told more than 1,000 high-ranking guests from about 90 countries, including ministers from G20 nations China and Argentina, at the third Berlin Energy Transition Dialogue. The two-day conference on the future of a "global Energiewende" opened with speeches by solar flight pioneer Bertrand Piccard, International Energy Agency (IEA) director Fatih Birol and International Renewable Energy Agency (IRENA) director Adnan Amin.

For background read the CLEW article IEA director calls on Germany to lead on climate during G20 presidency.

Please note: The Clean Energy Wire will publish an article on this topic later today.

In contrast to their prepared text, G20 finance ministers and central bank governors included no mention of the challenges posed by climate change in the communiqué after their meeting in Baden-Baden on 18 March, writes Germanwatch. “Apparently, the new US government did not allow the mention of the global climate crisis in the consensus-based document,” the group writes in a statement. Germanwatch called on Chancellor Angela Merkel, who has pledged to use the German G20 presidency to focus on climate change, to come up with a strategy ensuring that climate protection will advance without the US.

Changing the world’s energy supply from fossil fuels to renewable sources would result in net economic gains, according to a study by the International Renewable Energy Agency (IRENA) and the International Energy Agency (IEA). The agencies’ study, published in the context of the international conference Berlin Energy Transition Dialogue, argues that global CO2 emissions can be reduced by as much as 70 percent by 2050 “and completely phased-out by 2060 with a net positive economic outlook.” “The economic case for the energy transition has never been stronger,” IRENA director Adnan Z. Amin said, adding that delaying the transition will only result in greater costs. The study estimates that investments needed for decarbonising the world’s energy sector amounted to less than 30 trillion dollars until 2050, a mere 0.4 percent of global GDP, which in turn would generate a 0.8 percent boost in GDP. IEA director Fatih Birol argued that in order to achieve an emissions reduction in line with the Paris Climate Agreement goals would require “95 percent of electricity to come from low-carbon sources, 70 percent of all cars to run on electricity and the entire world’s building stock to be  retrofitted.” The study holds that inevitable job losses in the fossil fuels-based industry associated with this substantial shift would be more than offset by new jobs generated in the renewables sector.

Find a press release on the IRENA / IEA study in English here.

“Transport and cold weather cause emissions to rise”

Germany’s greenhouse gas emissions rose to 906 million tonnes in 2016 (from 902 mln in 2015), due to colder weather and rising emissions in the transport sector, according to preliminary calculations by the Federal Environment Agency (UBA). The data confirms last week’s newspaper reports. Sinking emissions in the energy sector, mostly due to natural gas replacing other fossil fuels, did not balance out rising emissions brought on by an increased use of diesel, for instance in goods transportation, and the need for heating. “The climate emissions from the transport sector are now 2 million tonnes above the value of 1990,” said UBA president Maria Krautzberger. 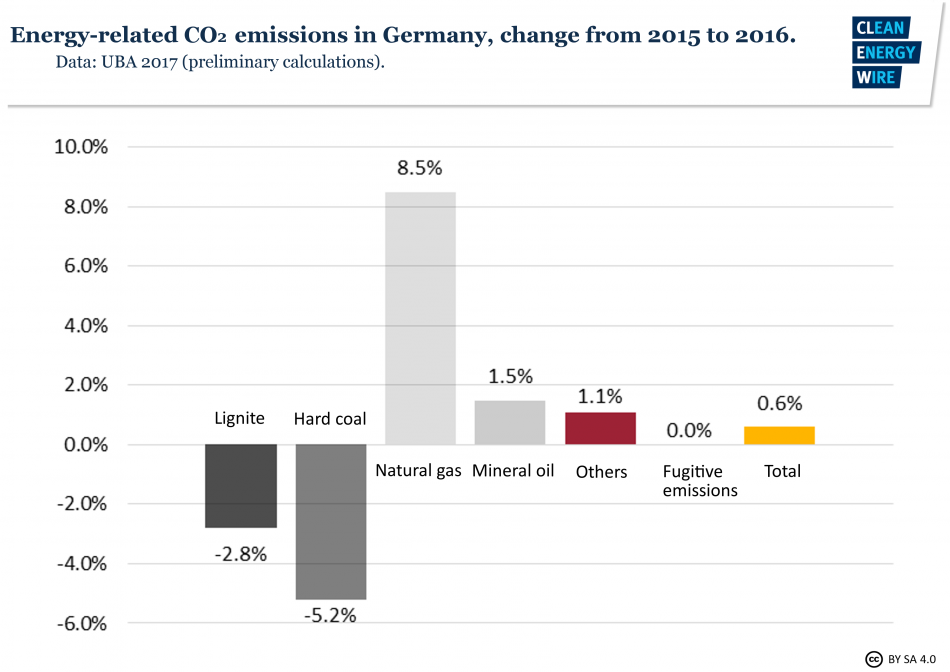 German energy companies are pouring resources into digitalisation across the entire value chain of the industry, writes Bernward Janzing in the Handelsblatt. Both old, established companies and new, creative start-ups are jumping on board, he writes. “Digitalisation is one of the biggest topics in the energy industry,” Janzing quotes Stefan Kapferer, head of the German Association of Energy and Water Industries (BDEW) as saying. At the beginning of 2017, the BDEW opened up its networking database of around 700 digital start-ups that energy businesses can connect with, Janzing writes.

“These power plants survived WWII bombs, but maybe not Merkel”

Sweden’s Vattenfall AB and Norway’s Statkraft AS say they might close some pumped-hydro plants in Germany, while Alpiq Holding AG may sell some units in Switzerland because they are no longer as profitable as they once were, write Weixin Zha and Jesper Starn for Bloomberg. “While solar and wind get 20 billion euros ($21 billion) in subsidies per year from Berlin, the pumped-hydro plants get nothing but more regulation and rising bills for grid access", the authors write.

The German head of Danish North Sea windpark operator Dong Energy, Martin Neubert, told German press agency dpa that a discussion over expanding wind power by 700-800 megawatts per year is “in the distant future,” because infrastructure isn’t expanding quickly enough, according to German weekly Wirtschaftswoche. According to the article, 50-60 gigawatts of wind will be needed by 2050. Dong Energy manager Volker Malmen said that the North Sea holds great potential, but, “By 2020, we will have around 7.7 gigawatts, which is just over 10 percent.”

Read a CLEW dossier about expanding the power grid here.

Read a CLEW factsheet about challenges for the transmission grid here.

“Exporting the Energiewende will be a challenge for Germany”

The German energy transition needs to be “internationalised” if it is to be successful, as Germany’s Energiewende will continue to have an impact on energy markets of its electrical neighbours and beyond, writes Nick Butler of the Financial Times. The impact on markets, and on utilities, such as Germany’s E.ON, won’t be isolated, he writes. “As E.ON and the other German utilities have found over the last decade, the Energiewende is a cumulative process that over time transforms the whole market and sweeps away the apparent certainties of existing business models.“

Read a CLEW dossier about German utilities and the Energiewende here.

Some communities in Bavaria are expressing their displeasure with the expansion of wind power in the region, and fewer wind turbines were erected in 2016, writes Horst Peter Wickel in the Welt am Sonntag. In Bavaria last year, 124 new wind turbines were put up, compared to 143 in 2015, he writes.