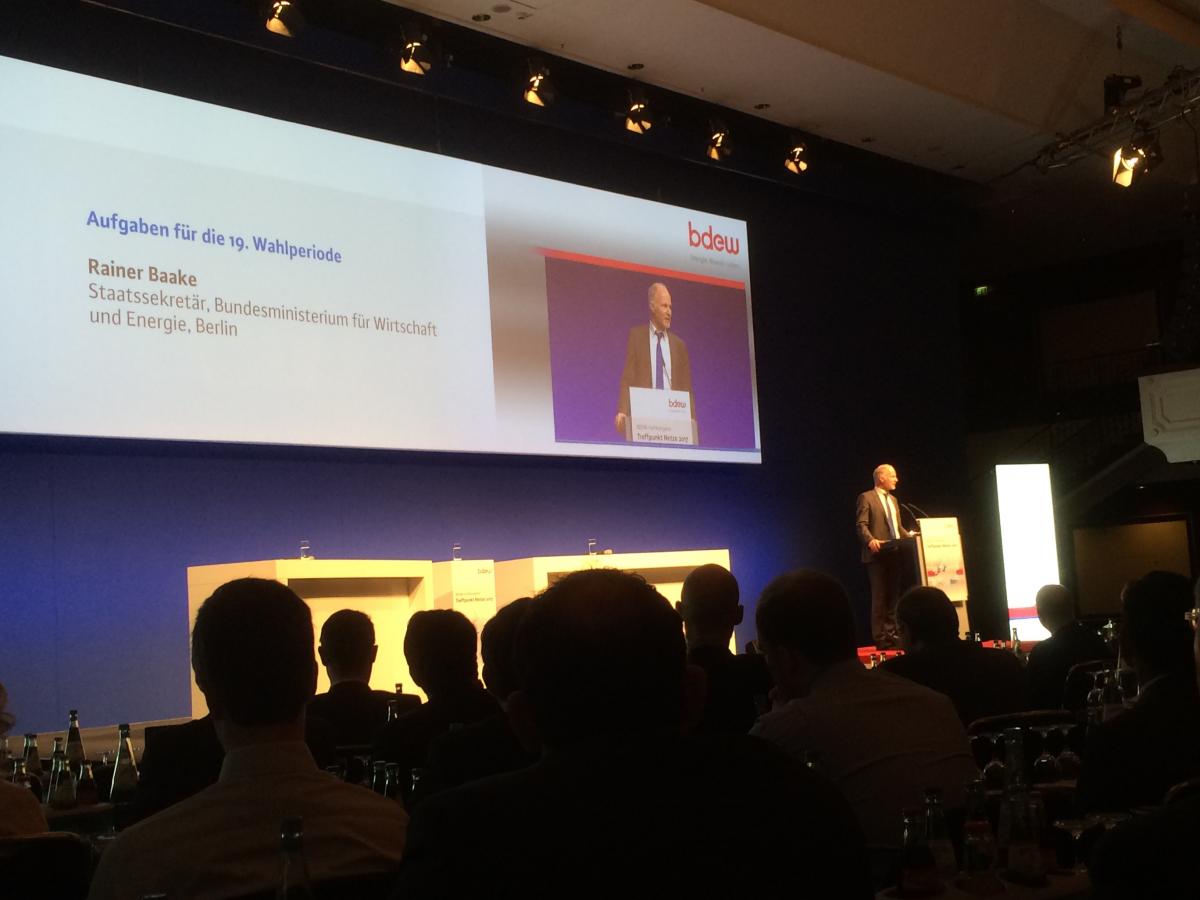 State Secretary Rainer Baake speaking at the BDEW's grid conference 2017
Regardless of who will win in Germany's next federal elections, increasing energy effciency in sector coupling and mastering digitalisation will be core aspects for ensuring a successful continuation of the energy transition, says state secretary Rainer Baake. The influential Energiewende official urges German power companies to embrace decarbonisation as a vehicle for modernisation and dismisses suggestions that the country gets bogged down in transforming its energy supply. Yet, there's still a long and difficult way ahead to fulfil climate targets, he adds.

Energy-efficient sector coupling and digitalisation will be a priority for energy policy makers in the next German government after elections in September, according to Rainer Baake, state secretary in the economy ministry. Germany can only fulfil its commitment to the Paris Climate Agreement by making greater energy efficiency “a clear priority,” Baake said during a speech at a conference of the German Association of Energy and Water Industries (BDEW) in Berlin. “There’s no other way.”

Increased electrification of all sectors will ultimately be the key to lowering emissions, Baake said. The coupling of the power sector with the mobility and heating sectors would lead to “a significant rise in electricity demand,” he said, stressing that the process must be geared towards maximising energy efficiency.

The next phase of Germany’s energy transition must “focus on economic viability,” he said, adding that the next government needs to “spell out in detail” how it plans to meet the country’s Climate Action Plan goals. Fulfilling the plan’s sector targets for reducing emissions, for example in building construction, will require “massive efficiency gains,” Baake said. “Otherwise costs won’t be socially acceptable.”

The state secretary urged conventional power companies to direct their attention to an inevitable wave of digitalisation, which is likely to stir up and increase competition in the power market. “The times when four major suppliers dominated the market are over,” Baake warned, noting that in Berlin alone customers have a choice of more than 450 different power providers.

“Any government” will commit itself to Paris Agreement

Decarbonisation implies modernisation, he stressed, calling on industry representatives to approach the Energiewende with emphasis on innovation cycles. Thanks to Germany’s experiences in recent years, “we know how this works in the power sector,” Baake said. Other sectors could expect to still lead the debate the power sector has “already gotten past” especially the mobility sector, where “no progress” has been made so far, he added.

“Of course I cannot speak on behalf of the next government,” Baake said. But regardless of who prevails in the September election, his “personal expectation” is that “any government will adopt at least one sentence” on the Paris Climate Agreement. Germany is committed to contribute to limiting global warming, he noted. (See this CLEW factsheet on Energiewende policy making for further information).

Baake is widely regarded as one of Germany’s most influential energy policy officials. As state secretary in the environment ministry, he helped broker Germany’s nuclear exit in 2000. After a nine-year hiatus from government politics, the trained economist joined the economy ministry as state secretary in 2014 to work on the reform of the Renewable Energy Act (EEG).

Energiewende issues are likely to play a relatively minor role in this year's general election, according to pollster forsa. "Energy issues will have hardly any influence on the election results," said forsa head Manfred Güllner at conference by the German Industry Initiative for Energy Efficiency (DENEFF)  in Berlin. "Energy almost plays no role at all" in this year's voter decisions.

In the current legislative period, Baake said the government had “expected a lot from companies and citizens” in advancing the energy transition. However, the average power price in Germany stood at roughly 29 cents per kilowatt hour (kWh) at the beginning of the period in 2013 and was at about the same level at the beginning of 2017. (See the CLEW factsheet What German households pay for power) “Bulk buyers even pay less than that,” he added. Nevertheless, observers expect the debate on financing the Energiewende to gain traction in the next legislative period (See this CLEW article on the emerging funding debate).

Recent newspaper headlines proclaimed “Germany is running out of power”, after a dearth of wind and sunlight hit renewables production in January, but Baake dismissed these as “rubbish.” Even during such a “Dunkelflaute”, Germany still remained a net-exporter of power, he stressed (See the CLEW factsheet How Germany can keep the lights on in a renewable energy future?).

Baake emphasised that the government’s goal of reducing emissions by up to 95 percent by 2050 is “a near total decarbonisation of our economy.” He said the ambitious target was “not always taken seriously” but added that “the debate will come up.”

While in some areas, such as industrial production or agriculture, the government as of yet has “no idea” how to significantly curb emissions, it is clear that technological modernisation will set the pace. There will be “a competition among national economies” for the most efficient way to achieve the commonly agreed targets, he predicted.