Renewable Energy Act | EEG 2016 Renewables
Against a backdrop of general elections later this year, a debate about a general overhaul of Germany’s much-imitated system for renewables support is gathering pace. Many proponents of replacing the current Renewable Energy Act (EEG) with a different system argue extending the energy transition from electricity to heating and transport requires a new way to distribute costs. Concerns about the rise of power bills for households and smaller businesses have also triggered calls for a mechanism to cap power costs. A third argument brought forward is that making CO2 emissions more costly would be a much more efficient way to finance the Energiewende in the world’s fourth largest economy.

The issue of how to distribute the costs is one of the thorniest issues in Germany’s energy transition, with the electricity price often the focal point of discussions.

Data on household prices regularly add fuel to cost concerns. Utility association BDEW said recently German households would pay a record of more than 35 billion euros in taxes and levies with their electricity bills in 2017, while wholesale power prices continue to fall.

“In light of these figures we have to discuss how we can reasonably design the financing of the energy transition in the future,” the head of the German Association of Energy and Water Industries (BDEW), Stefan Kapferer, said in a press release accompanying the association’s power price analysis 2017.

With his remarks, Kapferer added his voice to a growing chorus calling for a fundamental overhaul of renewables support in Germany.

The Renewable Energy Act (EEG) surcharge consumers pay with their power bill currently finances the feed-in tariffs that made investments in renewables profitable and kick-started their ascent without tax-funded subsidies. But the continued rise of the levy puts a burden on German consumers’ power bills, and many believe this year’s broad introduction of competitive auctions to determine renewable payments won’t do enough to lower costs.

Think tank Agora Energiewende* estimated in 2015 that the EEG surcharge would likely peak in 2023 and fall thereafter. But the development will depend on future wholesale power prices, and the share of renewables in the power system. [Read about how the EEG-surcharge finances renewables expansion in the CLEW factsheet Balancing the books: Germany's "green energy account"]

In recent months, commentators and politicians argued the next government following the September federal elections might have to come up with alternatives or additional ways of financing Germany’s Energiewende sooner rather than later.

Germany’s households currently pay an all-time high average of 29.16 cents per kilowatt hour (ct/kWh) for power (compared to 28.8 ct/kWh in 2016), according to utility association BDEW. State taxes and levies make up more than half, while grid fees account for another quarter. Both the EEG-surcharge and average grid fees rose by more than 6 percent with the turn of the year.

At the same time, suppliers’ profit margins and their costs of purchasing wholesale electricity on the market continued to fall for the fifth year running and make up only about 19 percent of the power price for household consumers. 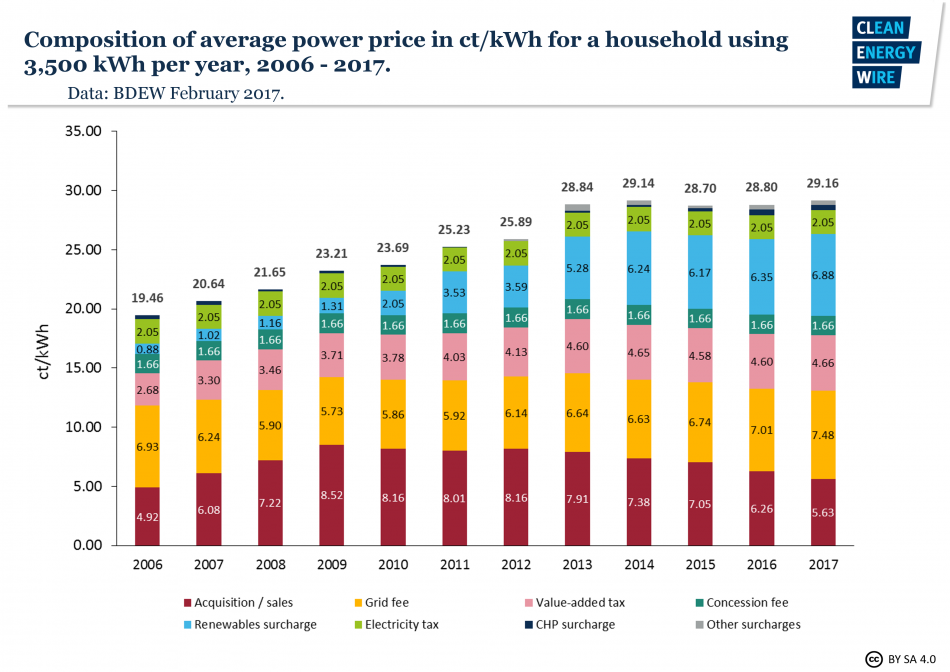 More power for heating and transport

Using renewables such as solar and wind to cover an ever-larger share of Germany’s power demand is key to the Energiewende – the country’s strategy to decarbonise the economy and phase-out nuclear energy. Renewables are now Germany’s second biggest source of electricity, after coal.

But more clean power will be needed in the future, when other sectors like transport and heating switch from fossil fuels to electricity as their primary source of energy, a process often referred to as sector coupling.

This prospect increases concerns over the cost of renewables development and integration. Former economy minister Sigmar Gabriel said late last year the renewable surcharge was insufficient for a comprehensive energy transition. He argued the surcharge will not be enough to put the Energiewende on a sound financial basis, due to growing demand for electricity in transport and heating.

To address general concerns over costs, the federal government reformed the Renewable Energy Act (EEG) in 2016, limiting the amount of new renewables capacity to be added each year and switching from set feed-in tariffs to an auction-based system to support renewable power generation going forward.

Even before the reform had taken effect, politicians from Angela Merkel’s Christian Democratic Union (CDU) floated ideas on how to abolish EEG support by the end of the coming legislature.

Thomas Bareiß, representative for energy policy of the CDU/CSU parliamentary group, in December told the Clean Energy Wire that in 2017 and beyond, “we have to talk about a gradual end to renewables support”.

The list of proposals on how to reform the system is starting to grow.

In a “very first step of a long process”, Germany’s energy and economy ministry (BMWi) is already investigating alternative ways to fund the country’s switch to renewables. The ministry tendered for a study to explore “models for the future financing of renewable energy”.

In December 2016, an expert commission tasked with monitoring the progress of the energy transition recommended a “general CO2 price tag” to finance future renewable energy expansion. Since a CO2 price would lead to higher wholesale electricity prices, an end to the renewables support via guaranteed tariffs was possible, they said.

Hermann Albers, vice-chairman of the German Renewable Energy Federation (BEE), said Germany ought to replace its electricity tax with such a price tag for CO2 emissions. “The taxation scheme needs a restructuring” in order to lower the current Renewable Energy Act (EEG) surcharge, Albers said at a 2016 conference. A price tag for CO2 emissions could help reduce fossil overcapacities, Albers explained.

The Association of Energy Market Innovators (bne) suggested to base the EEG-surcharge not only on electricity consumption, but also on final energy consumption in the heating and transport sectors.

Business lobby group Initiative Neue Soziale Marktwirtschaft (INSM) said the levy should be abolished and the system replaced by a quota determining how much of utilities’ power must be renewable.

The cost for future renewables development is only part of the challenge. Some reform proposals focus on the fact that high feed-in tariffs dating from early renewable boom years still cause the bulk of the costs covered by today’s renewable surcharge.

The remuneration rates were fixed for 20 years, so today’s power consumers continue to finance high renewable payments pledged in the early stages of the Energiewende. The renewable installations receiving the highest payments are solar PV systems installed at a time when high feed-in tariffs were aimed at kick-starting the market.

Ilse Aigner and Garrelt Duin, the state economy ministers of Bavaria and North Rhine-Westphalia (NRW) respectively, jointly proposed permanently capping the Renewable Energy Act (EEG) surcharge for power consumers at 6.5 cents per kilowatt hour (ct/kWh). They said a federal fund, initially covered via loans, should distribute the renewables support cost over several years. It would be used until about 2028, when levy revenues exceeded the payments to renewable facility operators and could be used to repay the loans.

Green top politician Robert Habeck also went on the record with a proposal of a government-administered fund, financed through reformed energy tax payments, mainly to deal with just these pledges. Agora Energiewende suggested a similar fund in 2015.