Factsheet
The green energy account is the basis for calculating what German consumers pay to fund the Energiewende: a levy currently comprising a fifth of their power bills. The rapid rise of renewables over the years has inflated this levy, a perennial hot potato of the transition to a low-carbon economy. The green energy account has in recent months gone from surplus to surplus, posting another record in January. It is a cornerstone of the Energiewende because it finances the feed-in tariffs that made investments in renewables profitable and kick-started their ascent without tax-funded subsidies. This factsheet explains the principles behind the system.

Local power grid operators are obliged to buy green electricity from most renewables producers at a fixed price, the so called feed-in tariffs. The operators resell the electricity on the power exchange at current market prices, which are usually much lower. The difference between the feed-in tariff and the actual market price for electricity is covered by consumers in the form of a surcharge.

The whole process is reflected in the national green energy account provided on a monthly basis by the grid operators. On this account, operators book the combined electricity surcharges paid by consumers as income. To this, they add their proceeds from reselling green energy at market prices. On the expenditure side of the account, they book the feed-in tariffs they must pay to producers of green energy. Based on assumptions about future electricity generation and market prices, the levy consumers pay is fine-tuned every year in order to adjust income to expenses and thereby keep the account in balance over the long term. 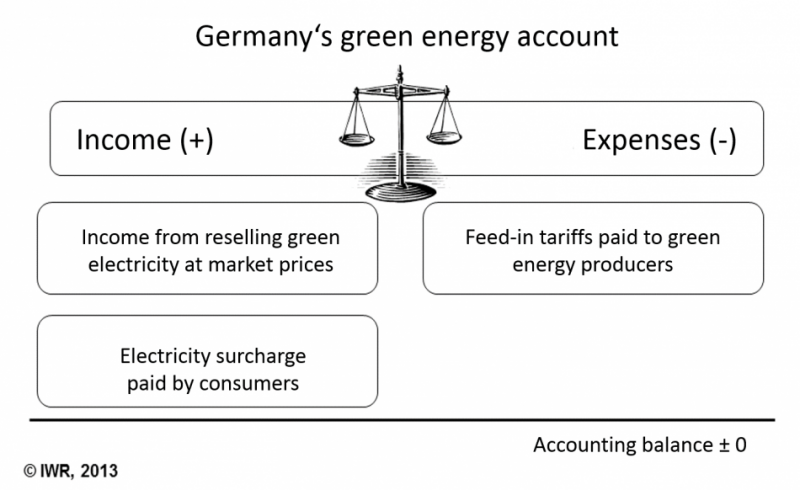 The latest account statistics illustrate the process. On the income side of the account, German consumers paid surcharges in 2014 of 22.4 billion euros, while proceeds from resold electricity were 1.6 billion euros. This means green energy producers were paid on average 14 times more for their electricity than it was worth at actual market prices. This is because feed-in tariffs were fixed at a relatively high level when the projects went online while current electricity prices were at record lows – partly because solar and wind projects, once built, produce electricity at a cost close to zero and their huge number has led to oversupplies.

Including some small, technical items, the income from the surcharge and from reselling green power totalled 24.6 billion euros in 2014. Total expenses - i.e. feed-in tariffs paid to producers – were 21.5 billion euros. The difference between income and expenses meant power users overpaid, which resulted in a surplus of around three billion euros at year-end. Thanks to this extra cash, the electricity levy could be reduced for the first time since its introduction.

In January, the levy paid by consumers outstripped the feed-in tariff paid to producers by almost 650 million euros. This increased the account surplus to an all-time record of 3.5 billion euros. But the surplus always balloons in winter, because then consumers use more electrity - and therefore pay more surcharges - and solar plants don’t produce much energy which operators must buy. In the summer, the reverse is true: private electricity consumption goes down and solar projects ramp up production, pushing the account into the red.