Factsheet
Germany’s shift to green energy continues apace. But how will a fully renewables-based electricity system power the world’s fourth-largest economy on days when there's no sun or wind? Energiewende opponents argue Germany will face unavoidable power shortages, while proponents of the transition point to a whole range of options.

Matching weather-dependent wind and solar power generation with demand, without relying on nuclear power or climate-damaging coal and natural gas, is considered one of the greatest challenges for Germany’s Energiewende, the country’s double shift to a nuclear-free and low-carbon economy.

A third of Germany’s electricity demand is already covered by renewable electricity, a share that will top 50 percent by 2030, according to the country’s climate targets. These targets also imply that by mid-century, the country’s entire electricity sector will have to be renewable, because unavoidable emissions in industry and agriculture will likely eat up German’s remaining CO2 budget by then.

In the longer term, Germany will no longer be able to rely on its nuclear power stations, all set to be switched off by 2022, nor on plants fired by coal or natural gas, to provide the permanent minimum power required – called “baseload.”

Sceptics have argued Germany’s power system will never be able to run on renewables alone, because even if the country drastically increases the number of wind turbines and solar farms, they won’t generate enough electricity to cover demand during dull and dark days. This weather situation has been discussed so widely in the context of the energy transition that a new word for it has entered the German language: Dunkelflaute, a dark, dead calm.

The start of 2017 provided many examples for this weather pattern. For example, wind and solar production was very low in mid-January, as illustrated by this graph: 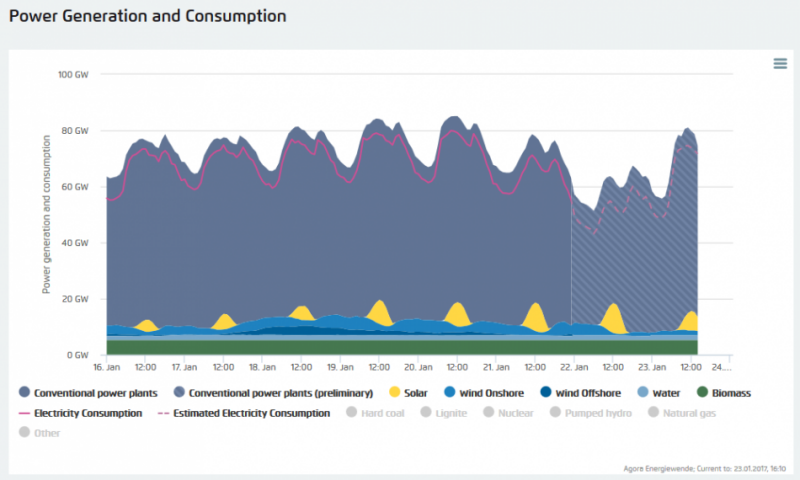 The data shows that even a tripling of wind and solar capacities would have fallen well short of covering demand.

There are many approaches to bridging gaps in supply and demand. “In short, integration of variable renewable energy (VRE) is not simply about adding VRE to ‘business as usual’, but transforming the system as a whole,” according to a landmark study by the International Energy Agency (IEA). Most experts believe an electricity system based on an increasing renewable share will require a combination of various elements – depending on costs, availability, and specific demands:

The following graph illustrates some of these options. It suggests storage systems should be used later than other methods, because they are more expensive. 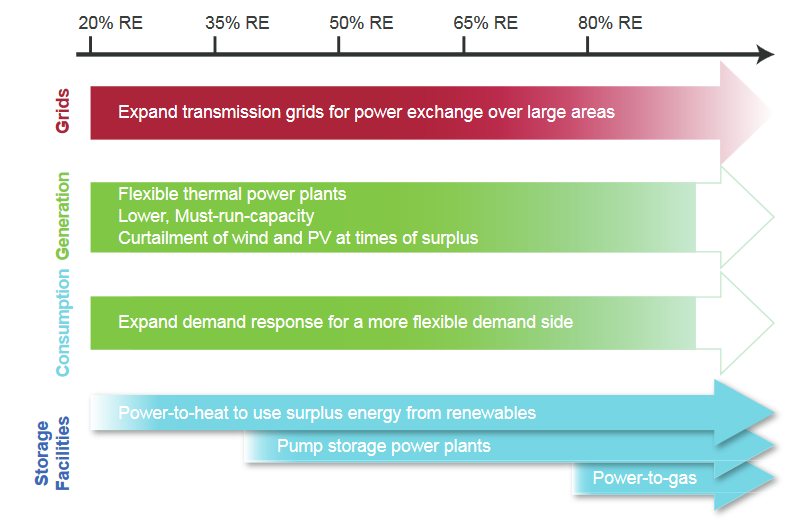 The remainder of this factsheet will look at these options in a little more detail.

Manage demand instead of supply

The possibility to adjust demand to match supply – instead of taking the obvious route of adapting supply to demand – is an option that offers large potential, but is often overlooked.

This can be done in two ways: By increasing efficiency in general and thereby permanently lowering power consumption, and by making short-term demand more flexible. This is easiest in industrial uses, for example in cool-storage houses.

Efficiency is already one of the two main pillars of German Energiewende policy – on par with the roll-out of renewable energies. The potential is huge and so far largely untapped, which is why the issue has been dubbed the “sleeping giant” of the energy transition.

But many experts believe that Germany’s power demand will increase significantly by mid-century, overcompensating efficiency efforts. This is because both transport and heating will probably have to be powered by renewable electricity (which includes the possibility of using gas made with renewable power, often referred to as “power-to-gas”) – to cut emissions in these sectors – a process often referred to as “sectoral coupling”.

Therefore, it will become even more crucial to make the economy’s short-term demand more flexible. “Demand response can reduce the cost of electricity supply, further the integration of renewables and contribute to security of supply,” according to a study on demand management commissioned by Agora Energiewende* (with a summary in English). “There will be a greater role for demand response both when overall demand is weak but feed-in from renewables is high and when demand is strong but feed-in from renewables is low.”

On the other hand, industry can switch off flexible consumption at times of scarcity, avoiding high prices on the wholesale power markets. Switching off consumption is often referred to as “load shedding”, and postponing demand as “load shifting”.

It comes as little surprise that “digitalisation” is today’s most important buzzword in the energy sector. Information technologies can enable myriad ways to balance supply and demand – for example by managing the power consumption of household appliances, or integrating electric vehicle batteries into the power system.

A flexible power supply will also be essential in a renewable power system. Wind and solar will have to be supplemented with other power sources in the future that can be switched on and off easily. One option is to use biogas, but existing plants will need to become more flexible.

Conventional gas-fired power plants are much more flexible than coal and nuclear plants, because they can ramp up production within minutes to supplement wind and solar production. This is why they will likely play a key role in a power system increasingly running on renewables. In a 100 percent renewable electricity future, gas-fired power plants will have to run without causing emissions, by using gas made with renewable power.

Power from abroad can also be used to bridge a gap between supply and demand in a renewable power system. For example, Germany can import electricity from neighbours with large hydropower storage capacities, such as more mountainous Austria.

A more integrated European power grid, which would also involve grid extensions, could also enable the country to import solar and wind power from other countries with different weather – for example, solar energy from Greece and wind energy from Spain. Dull and dark days might be fairly common in the whole of Germany, but are much less likely in the whole of Europe.

Germany will also be connected directly to hydropower-rich Scandinavia soon. In early 2017, grid operator 50Hertz announced plans to build a power line to connect the country to Sweden. Additionally, building work has started on NordLink, the first direct power line between Germany and Norway. The cable will allow the exchange of renewable energy from 2019 on. At times of strong wind power generation in Germany, excess power can be used to pump water uphill into a Norwegian reservoir. At times of weak German renewable production, the water can be released through a turbine to generate power, and sent back to Germany.

How to store renewable power?

A study commissioned by energy think-tank Agora Energiewende* concluded with reference to flexibility options and better grid integration: “The development of wind and solar systems in Germany during the next 20 years does not require new power storage.”

Regardless, research in storage technologies is in full swing, both in Germany and beyond. A great number of technicians, engineers, and other experts, at both old utilities and new start-ups, are currently looking for ways to store surplus renewable energy for later use – for example during those dull winter days. “The global energy sector is captivated by the promise of deploying energy storage alongside renewables,” writes the World Energy Council.

Today, renewable production already routinely outstrips demand in some German regions, requiring costly measures to stabilise the grid, and causing irritations abroad, where some of the power flows. An increasing number of renewable arrays are simply switched off to reduce grid overloads, causing additional costs.

Due to the continued increase of wind turbines and solar arrays in Germany, renewable power production on windy and sunny summer days will inevitably top the entire country’s electricity demand soon – possibly in 2017 for the first time. In the spring of 2016, renewables almost covered the entire country’s power demand during a few peak hours. In the far future, larger renewable surpluses will be a common occurrence in Germany.

Currently, the technology to store electricity on a scale sufficient to power the entire country is not available at an affordable cost. But the race is on to find the most cost-efficient way to capture all that surplus energy. Any breakthrough technology could reap huge economic rewards – not only in Germany, but on an international level. US giant General Electric says “energy storage could grow to be a six-billion-dollar market by 2020.” An MIT study said large-scale energy storage can already be a good investment today, depending on locations.

A large number of storage technologies are currently under discussion. Most experts believe that a mix will be used in Germany’s future energy system. Choices will depend on costs, and requirements – for example: How long will the electricity have to be stored?

Batteries are one obvious contender. Essen-based utility Steag, for example, has already invested about 100 million euros in six large-scale battery storage systems, according to business daily Handelsblatt. Batteries are particularly efficient at saving electricity in the short term, and can supply it at a fraction of a second when needed. Various co-operations between carmakers and utilities also put used e-car batteries to a second use as large scale storage that can also balance the grid.

In a future energy system, a decentralised system of small-scale storage technologies – for example in the form of household batteries - might also play an important role. Batteries made by companies like Tesla, Daimler, and Sonnen, are already becoming more common in households equipped with a photovoltaic system on the roof.

But to store large amounts of energy over longer time periods, batteries are at a disadvantage over pumped hydro storage. But the potential to increase the number of Germany’s conventional pumped hydro reservoirs is very limited for geographical reasons – it’s just not hilly enough.

Alternatively, surplus electricity can be used to make hydrogen or other gases that can be stored indefinitely, and then be burned to generate electricity in conventional gas-fired power plants, or used to heat homes. But the technology is currently expensive, because a lot of energy is lost during the conversion. Another approach is to store energy on a large scale in the form of heat.

There are also many entirely novel proposals for storing surplus electricity – ranging from underwater balls made of concrete to stone piles, to using old coal mines as pumped storage hydropower plants.

Only time will tell which combination of technologies Germany will use to keep the lights on in 2050.