Factsheet
Germany’s renewable power generation is on the rise and may soon exceed the country’s total power consumption for short time spans for the first time. But this milestone in the energy transition will be hard to pinpoint and verify because of patchy data. The significance of the threshold is mainly symbolic, rather than technical, according to experts.

But those figures were revised down shortly afterwards when preliminary data revealed more details. The exact renewable share on any given day remains highly uncertain for long timespans - and may never be entirely certain - because precise data on power generation and consumption is published with a time lag of many months

One of the first indicators for a high renewable share is the so-called Agorameter provided by energy think tank Agora Energiewende*. It is mainly based on market data and transmission grid operators' forecasts, rather than measurements of electrical current flows. According to the think-tank, same-day data on renewable production is fairly accurate, mainly because wind and solar power generation can be extrapolated from transmission grid operator data on reference points. But detailed data from conventional power plants are only available in the afternoon of the following day, when it is fed into the system.

The Agorameter’s information on electricity demand is even more uncertain, and is just as essential to calculate a figure for renewables’ share. Demand has to be estimated because hard data are not immediately available. For same-day data, the Agorameter relies on incomplete demand data from the European network of transmission system operators for electricity (ENTSO-E). Agora’s system adjusts these data to reduce shortcomings but especially extremely variable situations – such as holiday weekend consumption - reveal the weaknesses of these projections. The data become much more accurate the following day, when more detailed data on conventional power generation are available. 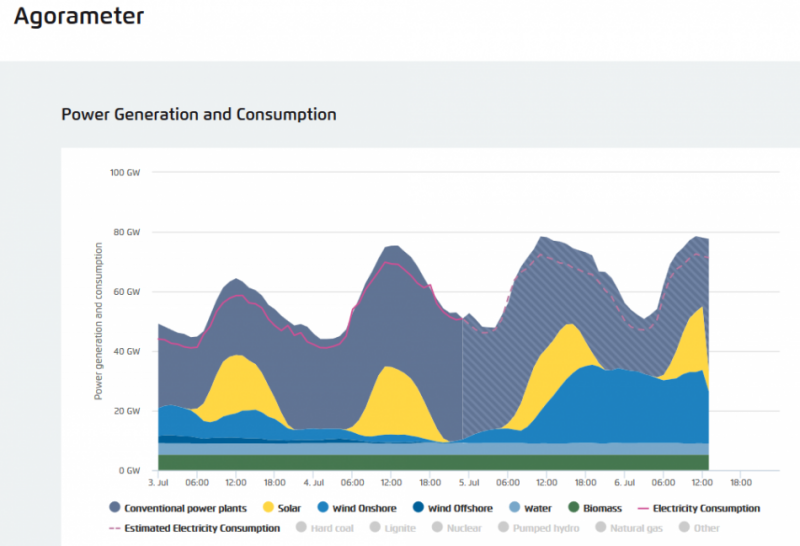 As a result, the Agorameter’s first estimates can deviate significantly from later data. On Sunday 15 May, for example, the system first suggested renewables had covered 100 percent of consumption for a few hours – triggering a tweet from the UNFCCC, and international media coverage.

But this figure was later revised down to 82 percent. “The reason for this adjustment is the update of data on power consumption,” the think tank explained. 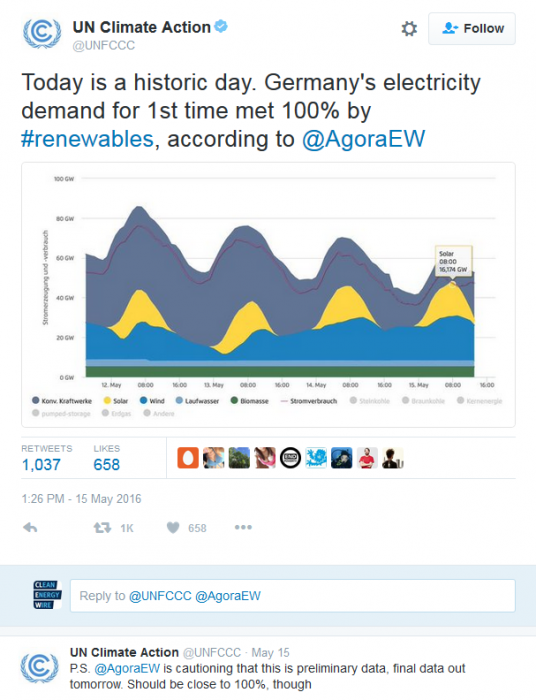 A similar tool to visualise power generation in Germany is provided by research institute Fraunhofer ISE on the website energy-charts, which is also based on data from transmission grid operators 50 Hertz, Amprion, Tennet, TransnetBW, as well as power exchange EEX. But the graphs don’t provide data on demand, and therefore do not signal record renewable shares of consumption. But the graphs provide important insights – for example, they also show how conventional coal generation is reduced at times of peak renewable production on weekends. It also provides short-term forecasts for renewable production.

Reports on very recent renewable records in Germany therefore rely on patchy estimates, simply because of the lack of more reliable and up-to-date data. Same-day data on Germany’s renewable share particularly cannot be more than a first and preliminary approximation.

But, despite these uncertainties, the recent developments show that a temporary share of 100 percent peak renewable generation of Germany’s power consumption is within reach, Bruno Burger, from solar energy research institute Fraunhofer ISE told the Clean Energy Wire. “If we get a day with full sunshine and really strong winds, we will cross that 100 percent threshold, there is no doubt.”

Wind and solar alone could currently provide up to 60 gigawatts (GW) of electricity under ideal conditions, while total consumption can fall to around 50 GW on Sundays, according to Burger. This is when most businesses and factories are closed and many people spend the day outside, therefore consuming less electricity. Renewable production tends to peak around mid-day, when sunshine is at its most intense and solar power generation at its highest. Germany has around 40 GW of solar capacity installed.

Burger insists that the mere fact of having renewable production outstrip demand does not pose any entirely new technical hurdles. “The 100 percent threshold is not an impenetrable sonic wall. Surely, grid operators have their work cut out and I don’t envy them. They have to adapt step by step to these new conditions.”

On a regional level, some grid operators are already used to renewable production outstripping demand. 50Hertz operates a grid where this is often the case. “We are a traditional surplus region. When generation outstrips demand, we transport surplus power to other regions, especially to southern and western Germany,” says press spokesperson Volker Kamm.

If Germany’s renewable generation were to cross the threshold of 100 percent of power consumption, the country would also have to export considerable amounts of power. This is because many conventional power plants would continue to produce electricity, as it is uneconomical to switch them off for short periods of time, and foreign demand for cheap power.

This is also the reason why renewables won’t cover 100 percent of power generation in the near future, nor will all the power consumed in Germany be renewable anytime soon, explains Michael Reifenberg, spokesperson of the German Grid Agency. “It will indeed be a very long time before all the electricity consumed in Germany is really renewable,” said Reifenberg. He said this scenario could only become reality if all conventional power generation is switched off in Germany, and the country does not import any electricity produced with conventional sources.

*Like the Clean Energy Wire, both Agora Energiewende and Agora Verkehrswende are projects funded by Stiftung Mercator and the European Climate Foundation.