Factsheet
The share of electricity from weather-dependent wind and solar energy in the German power mix keeps growing. That puts pressure on the electricity sector to be much more flexible in managing power demand and supply. The need for precise predictions of how much power will be fed into the grid at any given moment is becoming increasingly important. Accurate weather forecasts provide the basis but grid operators, electricity traders and renewable power plant operators themselves now rely on a new industry specialising in predictions tailored to the sector.

Weather forecasts as the basis for electricity feed-in predictions

The challenges of solar PV

The average share of wind and solar energy in Germany’s gross electricity production rose from almost zero in 1990 to 19.4 percent in 2015. Unlike conventional power from fossil fuels, which can be generated according to demand with total predictability, generation from these volatile renewable sources largely depends on the weather.

Under the right conditions, the share of renewables in Germany’s power consumption can rise to 80 percent or more. On a windless night it can fall to close to zero. This has consequences for grid stability, the location of renewable facilities, and for electricity prices. The better you can predict how much electricity will be fed in from renewable sources, the easier it is to manage these consequences. Precise weather forecasts are essential to these predictions.

It’s not just the rise of renewables that has made weather forecasts of interest to the energy sector. They have long been used to estimate how much electricity consumers will need in the short term. More electricity is used for heating on a cold winter day, less for running television sets on a sunny afternoon. This is called load forecasting.

Supply-side power generation forecasts, on the other hand, are a much more recent focus of energy meteorology.

Operators of renewable energy facilities started using weather data to determine the location and positioning of wind turbines and PV-parks a few decades ago. But it was the boom in renewables following changes to federal legislation in the 1990s and early 2000s that significantly pushed up demand for power forecasts to optimise everyday production.

Even before the rise of renewables, grid operators used weather forecasts to ensure infrastructure was prepared for extreme conditions and maintenance work was finished before a storm hit. But renewables expansion means the weather also has implications for grid stability.

Grid operators are responsible for balancing out supply and demand in the German power grid. With fossil fuel power generation, maintaining stability used to be a game with few variables, most of which could be controlled. With more and more of the power supply coming from decentralised, fluctuating sources, maintaining the balance is a laborious and costly undertaking that requires expertise and information. (For more information on maintaining grid stability, read the CLEW factsheet Re-dispatch costs in the German power grid.) 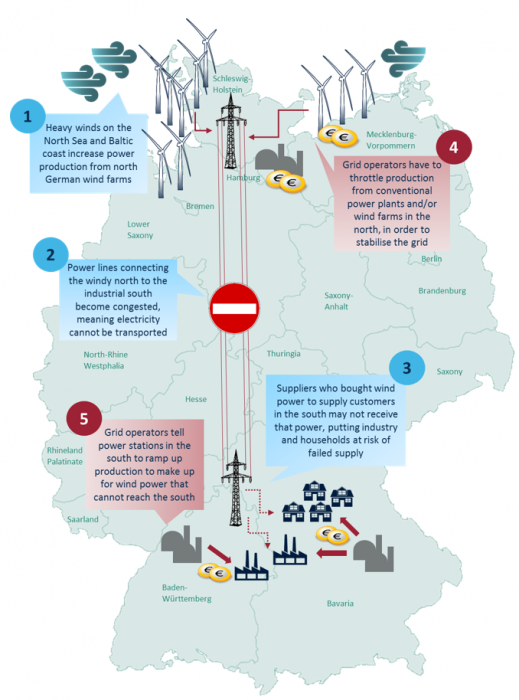 Sudden drops or surges in electricity feed-in are a big challenge in keeping the grid stable. Before and after the shadow passed during the partial solar eclipse on 20 March 2015, German grid operators had to balance out a 2,674-megawatt fall and a 4,111-megawatt rise in solar PV power within the 15 minute slots that the electricity exchange works on – changes four times greater than usual. But with a rising share of volatile renewables in the power mix, these heavy drops and increases are occurring more often. 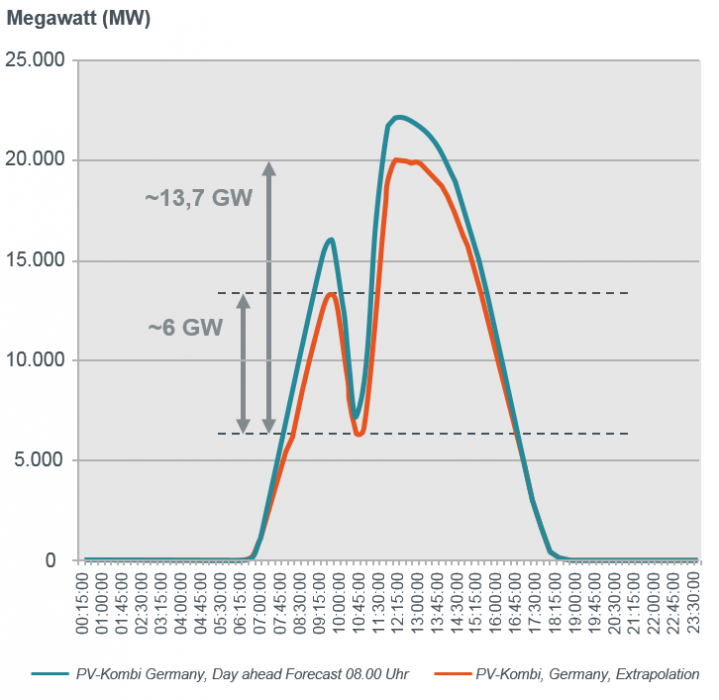 The number of stakeholders relying on exact forecasts grew substantially with the introduction of direct marketing from 2012 on. Operators of larger facilities in particular were gradually obliged to actively sell their power directly on the electricity exchange, rather than receiving set feed-in tariffs for their power. In 2014 more than 80 percent of installed onshore wind power capacity was marketed this way.

A number of direct marketing service providers now cater to small facility owners and operators. Next Kraftwerke, for example, operates a virtual power plant that connects electricity producers – such as small solar PV parks and wind turbines via a digital platform. Next Kraftwerke says this network of units, which can be switched on and off remotely, is much more flexible than traditional facilities. But power forecasts are essential to manage the system.

Electricity traders make a profit from buying and selling power at different prices on the various electricity markets. Forecasting supply and demand better than the competition is key, especially in the day-ahead market: as part of ‘scheduling management’, the amount of power to be produced in every 15-minute interval needs to be predicted and communicated to grid operators until noon of the day before.

Misjudgement of how much electricity will be sold a day in advance and then actually consumed results in costly adjustments (see re-dispatch costs). With better forecasts, less correction is needed.

Weather forecasts as the basis to predict electricity feed-in

Weather forecasts are the basis for exact power generation forecasts. They are provided by weather services, predominantly national weather services – in Germany, the Deutscher Wetterdienst (DWD).

As a starting point for the calculations, the DWD monitors conditions like air pressure, temperature, wind, clouds, precipitation and sunlight intensity worldwide in cooperation with other weather services. It uses data from satellites, (trading) ships, buoys, passenger aircrafts and ground-level weather stations.

DWD then employs weather models that divide up the area of interest from the ground to an altitude of up to 75 kilometres with a theoretical fine-meshed three-dimensional grid. For every intersection in this grid, the monitored data is fed through a set of equations. DWD currently uses a mesh width of 2.8 to 13 kilometres, depending on the model.

Extrapolation with the help of numerical weather prediction models (NWP) then allows the DWD to construct 7 to 10-day forecasts for every grid intersection. The calculations also incorporate historical statistics and climatology research findings. This requires an immense amount of computing power.

The smallest changes or uncertainties can lead to hugely different results, popularly known as the butterfly effect. The longer ahead the forecast (or time horizon), the bigger the deviations. For outlooks with a long time horizon, slightly different initial states within a single model, or several different models, are combined to compensate for the uncertainty of a single forecast. This is called ensemble forecasting. By comparing forecast outcome with how the conditions actually changed, models are constantly updated.

The DWD says there has been a substantial increase in demand for meteorological services from the energy sector as a result of the German energy transition. Today, it provides measured and predicted data, forecast products tailor-made for the energy sector (e.g. warnings of increased strain on power lines due to wind or snow), and consultation services. However, the DWD does not offer final power generation forecasts.

A nascent industry now specialises in predicting electricity feed-in. Companies like energy & meteo systems, meteo control, enercast and RM Energy Weather GmbH provide the expertise and calculations needed beyond initial weather information. Together with the DWD, grid operators, and research institutes like Fraunhofer IWES and Fraunhofer ISE, they have changed the composition of weather predictions and adapted the system to new needs.

Traditionally, forecasts focused on factors such as ground-level wind speeds than impact the way people experience the weather in their daily lives. But this is of little interest to new energy-sector clients, who need to know the strength and qualities of wind at a turbine’s hub height – usually 50 to 150 metres above ground. The PV power industry depends on the concentration of sunlight (surface solar irradiance measurements) – rather than simply the temperature around the PV system – and needs to know how much snow might have fallen on the panels.

Yet weather forecasts are just one of the key ingredients of a power generation forecast. The other important elements needed for accurate predictions are:

Live feed-in data is one of the main components to gauge current and predict future power generation in a given area. Some older renewable facilities do not provide live data. But all new installations are required by law to register with the Federal Network Agency (BNetzA), and since 1 January 2016, all those with capacity over 100 kilowatts must be remote controllable, including the ability to check for live data. Next Kraftwerke receives live data for every facility in its virtual power plant.

In the very short term, and when there are no big changes in weather conditions, the amount of power fed into the grid will remain roughly stay stable. Live data from one facility allows calculation of the feed-in of neighbouring turbines or panels that do not send live data.

To make accurate power generation forecasts, service providers also need metadata from individual turbines or PV systems, including their generation capacity and location data. Is there a tree nearby that casts a shadow over the panels at a certain time of day? What is the hub height of the turbine? Next Kraftwerke goes a step further and asks operators of facilities connected to their virtual power plant to enter additional information – for example on planned maintenance work and operational changes – into a special web portal.

Historical feed-in data is also used to fine-tune prediction models. This way, power generation for similar weather situations can be incorporated in the prediction.

One forecast calculation model might work best at high temperatures while another gives best results in a certain region when winds are strong. Just like for a weather forecast, many models can be combined in an ensemble power forecast for a more accurate prediction. Customers like transmission grid operators often contract several forecast services at the same time. They rate them internally according to how well the forecasts perform and weight them to produce one combined forecast.

Of course, no prediction is 100 percent guaranteed. Exact figures on deviations are hard to come by, but for its control area in north-eastern Germany 50Hertz currently deals with an average deviation of 2-4 percent for wind power and 5-7 percent for PV on the day-ahead forecasts (RMS error). 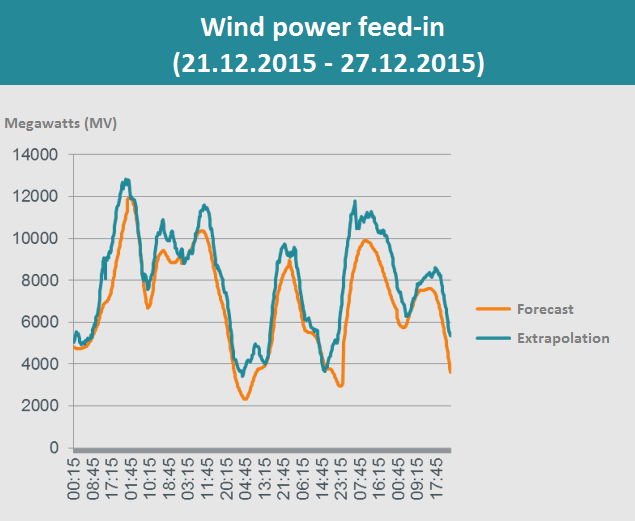 The challenge of solar PV

Forecasts are more difficult for solar PV than for wind power because of some sector-specific problems:

However, every PV facility needs a converter to transform the variable direct current output of a photovoltaic solar panel into a utility frequency alternating current. These and connected devices can often communicate live power generation data.

German company SMA Solar is a global player solar converter manufacturing and supplies the forecast industry with live feed-in data from more than 85,000 facilities across Germany. This creates a network dense enough for forecast calculation models.