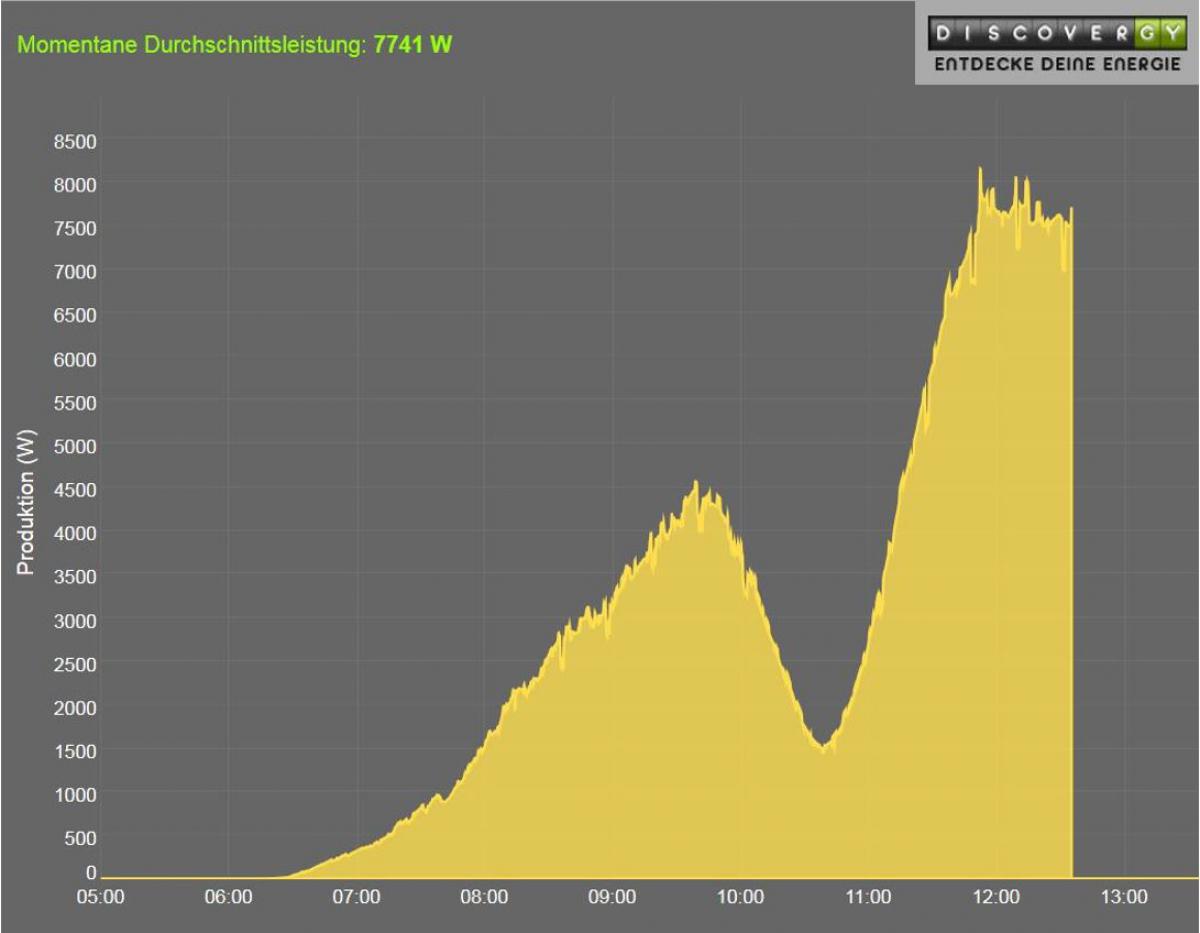 The solar gap: Power supply in Germany stayed stable despite a solar eclipse taking out most of its solar power production just before the lunchtime peak. Source: Discovergy Solar-Monitor on 100 photovoltaic meters, 2015.
Clear and sunny weather, a solar eclipse and no blackout - Germany's power system has passed an important test. The eclipse was a taste of the future, as the rise in renewables will make fluctuations of this magnitude regular events as early as 2030. Grid operators had warned the astronomical event would be “an extreme challenge” that will “stress test the power system" but in the end, all went "wonderfully".

Germany has passed the solar eclipse stress test with flying colours, grid operators said after the power system remained stable throughout the phasing-out and back in again of up to 15,000 megawatt of solar power when the moon partially blocked the sun this morning.

The moon concealed up to four-fifths of the sun in Germany, reducing and then increasing output more quickly than at a regular sunset or sunrise.

The solar eclipse posed a particularly severe threat to the German power system because no other European country can remotely match its solar capacity of 39,000 megawatts. At full power, solar panels can supply around half the country’s peak electricity demand and most cannot be switched off remotely.

"We are extremely relieved, everything worked wonderfully," Dirk Biermann, system manager of grid operator 50Hertz told the newsagency dpa. Across the country there were no blackouts or power shortages, the four transmission grid operators jointly said. "This is a good sign for the Energiewende," Biermann said. To ensure system stability, grid operators had secured reserve capacity from coal-fired power stations and pumped-hydro plants worth 3.5 million euros, dpa wrote.

Just after the moon had covered the sun by up to 83 percent, solar power input fluctuated between 7,000 megawatts and 22,000 megawatts.

Germans flocked to the streets to follow the spectacle. Media reported that special glasses to monitor the event were sold out in many places days in advance. Twitter was abuzz with comments from across the country, including from grid operator TenneT, which posted on changes to the feed-in of solar power and changes to frequencies in the grid.

"All lights green in Europe's grid," TenneT tweeted just after the eclipse was visible in Berlin. The German energy ministry sent a picture including a sport stadium scoreboard showing: "Energiewende 1, Solar Eclipse 0". 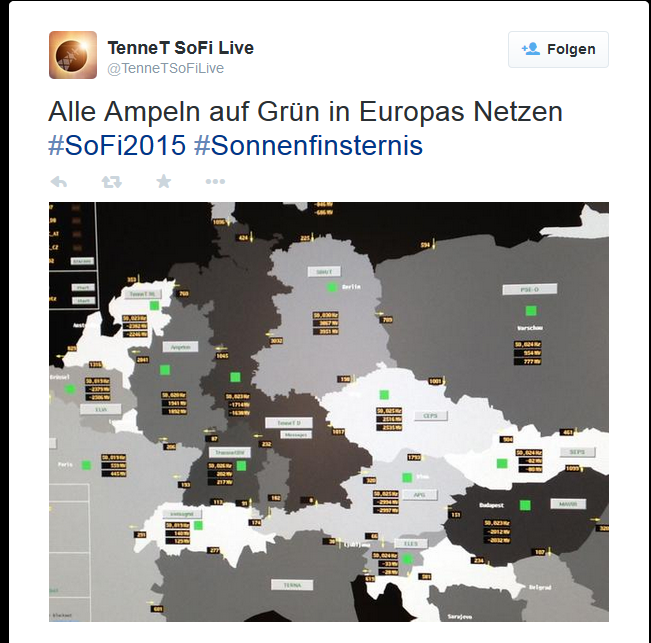 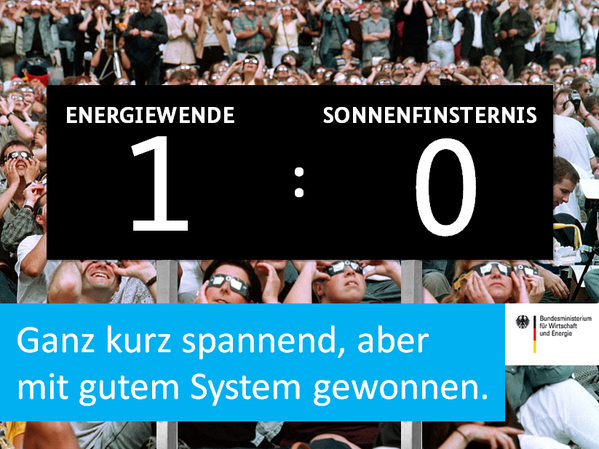 The challenge was to offset this rapid fluctuation with flexible power generation and demand – for example with gas-fired power plants or pumped storage power stations that can supply or use a lot of electricity at a moment’s notice.

By noon, both TenneT and northeastern transmission grid operator 50Hertz showed that their predictions for the gap and sudden spike in solar power input due to the eclipse had been quite accurate (See graph below). And as no power cuts were reported anywhere in Germany, they also succeeded in keeping the frequency stable throughout the event. 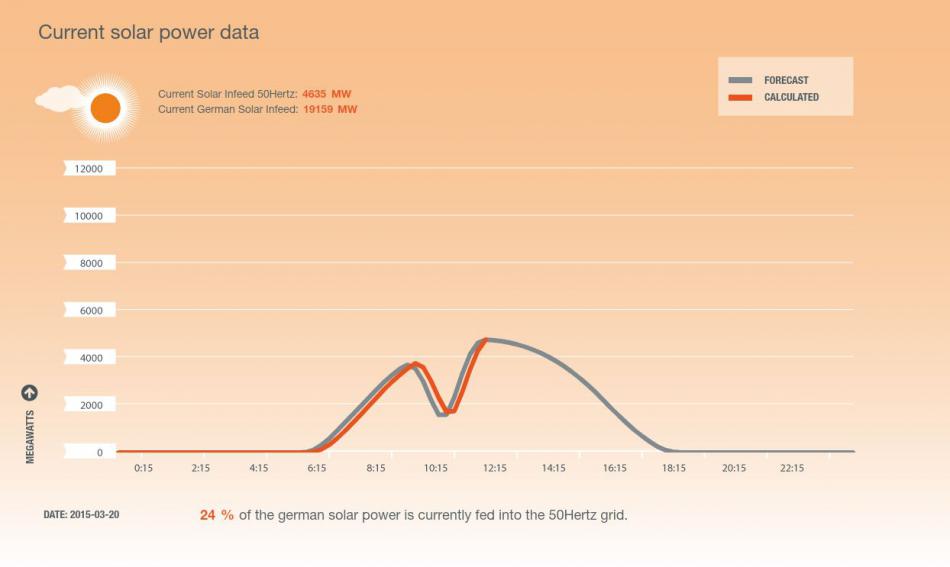 Grid operators spent close to a year preparing for the eclipse and coordinating responses with other European countries and the Federal Network Agency for Electricity. Some banned holidays for some employees and did double shifts. Therefore, most operators and the government were fairly confident the day would pass without major glitches. Nevertheless, all were curious how the day would play out.

One of the main challenges was that even though the eclipse itself could be predicted with absolute precision, its exact effects on Germany’s power system could not. For example, it was unclear how many people would switch on their lights and therefore put additional stress on the system.

Perhaps the lessons learned will help to master future eclipses with more confidence. At least there is still enough time to prepare. The next similar event is expected on June 11 in 2048. By then, renewables will generate 80 percent of Germany’s electricity according to government plans, compared with around 28 percent today. The steady increase of renewable power in Germany will make large fluctuations comparable to those of the eclipse on Friday commonplace well before that date. According to a study commissioned by energy think tank Agora Energiewende*, the eclipse provided a glimpse of 2030.

Many technologies to improve the balance between supply and demand are already available, but they need to be developed further, according to the study by Fraunhofer IWES. A secure future power system will require additional integration with other European power systems, domestic grid extensions, better integration of large consumers into the power market, the development of flexible storage technologies, and highly flexible power plants, argue the study's authors.

See a good overview and graphs of the performance of photovoltaics in Germany (in English) here.