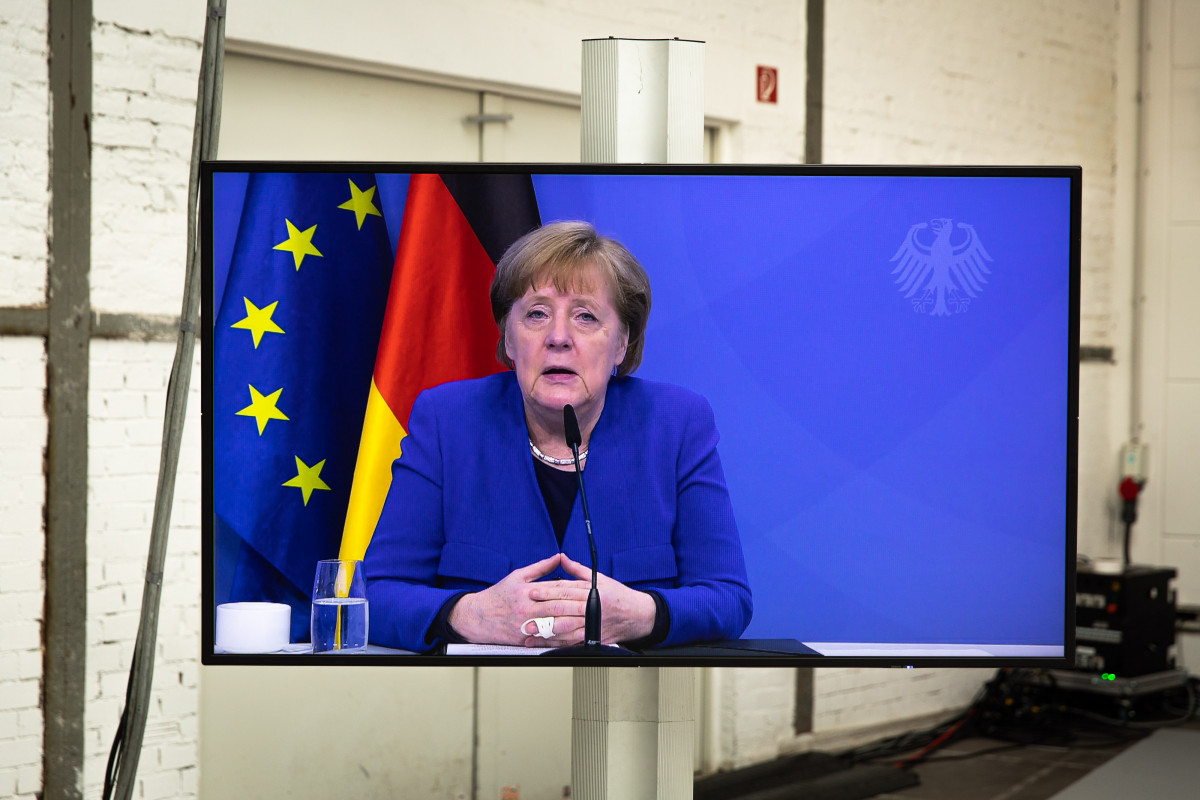 Germany’s chancellor Angela Merkel has stressed the need for action against global warming, and urged countries to not fall behind on climate protection measures and financing for developing countries despite the “massive holes” in their budgets due to the pandemic. While being congratulated on her government’s decision to increase the national climate target to net-zero emissions by 2045, civil society representatives were disappointed that Merkel herself didn’t announce more money for climate change mitigation and adaptation in the global south. Speaking at the 12th Petersberg Climate Dialogue, a meeting held in Berlin to prepare the November UN Climate Summit COP26 in Glasgow, Merkel and UK Prime Minister Boris Johnson both stressed the need of bringing negotiations on the last details of the Paris Agreement to a successful end this year. [Update adds Schulze/Sharma quotes on outcome, Germany's 2045 target will help to bring EU laggards along]

To reach climate neutrality as a common international goal, two decisive things must be present simultaneously: “national ambition and international solidarity”, German chancellor Angela Merkel said at the 12th Petersberg Climate Dialogue in Berlin. Her speech at the annual inter-ministerial meeting designed to prepare negotiations at the UN Climate Summit COP26 in Glasgow in November came one day after her government had announced a more ambitious climate target of greenhouse gas neutrality by 2045, five years earlier than previously planned.

UK Prime Minister Boris Johnson, speaking at the same event, hailed Merkel’s “drive and ambition” for Germany to become the first G7 country to declare this target, with all other members of the group having the objective of net-zero emissions set to 2050. Johnson urged world leaders to commit to increased action and climate finance in Glasgow despite the difficult circumstances: “We can’t allow action on climate change to become another victim of this pandemic,” he said, alluding to the COVID-19 crisis.

The German government wants to use the ministry-level meeting Petersberg Climate Dialogue - which is held virtually in Berlin - to advance negotiations about the technical but important details of the Paris Agreement that still need to be finalised. This includes questions on emission reporting standards and obligations for all countries and the trading and crediting of greenhouse gas reductions between countries. Another important issue is climate finance – the support that developed countries promised to give to developing countries in their fight against global warming.

However, the COVID-19 pandemic has drastically altered the context for international climate action and finance, and it is unlikely the 100 billion USD target was met last year. Merkel said that despite the pandemic, which had created “massive holes” in industrialised countries’ budgets, these must not fall back on their responsibility.

Johnson who will not only host this year’s COP26 in Glasgow but also next month’s G7 summit in Cornwall, said he hoped to “secure a substantial pile of cash”, to help developing countries in their climate change mitigation and adaptation to global warming. “We must achieve the long overdue 100 billion USD to developing countries.”

In a meeting of G7 foreign and development ministers this week in London, they “reaffirmed” their commitment  to the 100 billion USD goal and said they were “looking   forward to new commitments from others well ahead of COP26”.

Merkel not announcing a further increase in Germany’s climate finance contribution disappointed NGOs, which said the debt crises in vulnerable and middle-income countries make them unable to simultaneously adapt to climate change and recover from COVID-19. “Germany has failed to send a strong message of solidarity, especially to developing countries,” Brick Medak of think tank E3G said.

Jan Kowalzig, climate expert at Oxfam Germany, told Clean Energy Wire: “Both the U.S. and the UK have committed to double climate finance over the next years. Germany should have followed suit. Instead, chancellor Merkel ducked away with empty hands.” Germany must urgently use the next occasion at the G7 summit to pledge to double its climate finance by 2025, he added.

"It would be very desirable to have a global CO2 price."

Merkel argued what was needed now was increasing the efficiency of actually getting the money pledged on paper and technologies on the ground in developing countries.

"The improved German climate targets are an important contribution, but cannot give global climate protection a decisive boost without higher pledges for international climate finance," said Christoph Bals, Political Director of Germanwatch. "The bottom line is that this is not the hoped-for exclamation mark to Merkel's farewell from the global climate stage."

At the end of the two-day talks, ministers called to make COP26 in Glasgow a success and to conclude negotiations on all unresolved aspects of the rulebook under the Paris Agreement. Schulze highlights that more and more climate neutrality targets by countries around the world shows that “the hesitant wait-and-see approach of recent years has been replaced by competition to find the best climate action solutions. This shows that the Paris Agreement has now reached the centre of political discourse and the heart of society. The priority in the months to come will be to maintain and enhance the current momentum in international climate policy”.

Designated COP26 president Alok Sharma said while there was still work to do ahead of COP26, “I leave optimistic the political will is there to reach a balanced negotiated outcome in Glasgow.” He called the Petersberg Climate Dialogue “a testament to chancellor Merkel’s legacy” as it is among the “most established moments in the climate calendar”.

Germany's 2045 target will help to bring EU laggards along - researcher

The European Union has agreed a bloc-wide goal to reach climate neutrality by 2050. Germany is aiming for net zero greenhouse gas emissions by 2045, and possibly negative emissions thereafter. “This would create scope for other EU countries to reach net zero only after 2050,” said Oliver Geden, senior fellow at the German Institute for International and Security Affairs (SWP), lead author for Working Group III and member of the Core Writing Team for the IPCC’s Synthesis Report. Poland and Ireland could, for example, benefit from this, he added. “This will be viewed critically in Germany, but at EU level it helps to bring the laggards along as well,” said Geden.

Industry getting tired of targets, wants measures and investment

Recent climate target pledges by countries under the Paris Agreement have brought down the projected end-of-century warming by 0.2 degrees Celsius to 2.4°C. But German industry representatives are pointing out that only the actual measures that follow from these goals will make emission reductions happen.

Siegfried Russwurm, president of the Federation of German Industries (BDI) said the discussions at the Petersberg Climate Dialogue “must focus on the question of how the ambitious climate goals can be implemented worldwide”. “Only with globally comparable climate policy ambition and implementation can we help the world's climate.”

Sabine Nallinger from industry association Foundation 2° said: "Discussions about targets alone are not enough. We now need quick measures that support the economy in the transformation to climate neutrality." The economy needs an implementation package that provides much better support for companies in all sectors of the economy to make climate protection technologies competitive, she said.

Merkel said that fast and decisive action on climate change mitigation was necessary and that Germany’s highest court had just stressed, how climate action is a matter of “inter-generational fairness”. She said CO2 pricing was a “particularly suitable instrument” to limit emissions and that it “would be very desirable to have a global CO2 price”.

Germany to pull forward target date for climate neutrality to 2045