“Gabriel: The basis for the power market of the future is established”

The German government has approved wide-reaching reforms of the power market and agreements about the transferral of lignite power plants into an emergency reserve before permanent phase-out. “With today’s cabinet decisions, we have opened a new chapter for the power market of the future,” said economy and energy minister Sigmar Gabriel in a statement.
Greenpeace criticised the government, claiming it had created a “big present for the coal industry” and said more coal plants needed to be closed to reach climate targets. The environment and consumer protection NGO DUH said the government had chosen the most expensive way to reduce CO2 emissions.

Find a CLEW article detailing the fight over the future of lignite plants here.

“Energy consumption will rise in 2015”

Germany will consume around 1.7 percent more energy in 2015 than last year, according to forecasts by energy research group AGEB. The main reason for the increase is colder weather, according to the calculations which are mainly based on consumption figures for the first nine months of the year. The share of renewable energies will increase by almost nine percent because of a surge in wind production.
Natural gas’ share is to increase by around 8.5 percent because of the colder weather. Oil consumption will stay stable, while hard-coal use will drop by around two percent. In the first nine months of the year, the “increase of renewables in power production led to a decrease in the use of hard coal in power plants by around 1.4 percent”, according to an AGEB press release. Lignite’s share is to rise by almost one percent this year. 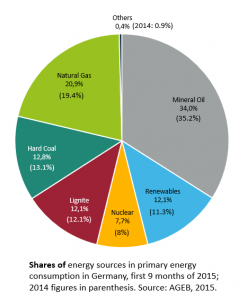 “Expensive compromises for the energy transition”

Grid expansion and keeping conventional power stations as a reserve to renewable energies will be the cost drivers of the Energiewende, participants of a meeting of the Institute of Energy Economics at the University of Cologne (EWI) agreed, the Frankfurter Allgemeine Zeitung reports. EWI director Marc Oliver Bettzüge suggested that grid fees should be payable by grid connection rather than as a levy on the power price so that all consumers - including those who produce part of their power themselves - share the costs.

“Terium is thinking about splitting up RWE”

German utility RWE may split into two companies like competitor E.ON if the price of electricity continues to fall, Reuters reports. The price for electricity has almost halved since 2012 and is now at 29.35 euros, the article says. RWE CEO Peter Terium said the company was closer than ever to agreeing with the government on participating in a foundation that would finance the nuclear decommissioning and storage.

An internal probe at German car manufacturer Volkswagen has found that 800,000 more vehicles showed “inconsistencies” on carbon dioxide emissions, EurActiv reports. The engines affected are 1.4, 1.6 and 2.0 litre motors of VW, Skoda, Audi and Seat cars – and at least one petrol engine – a VW spokesman said. The vehicles in question had all been found to be releasing more CO2 than previous tests had shown, the article states.

United Nations climate change chief Christiana Figueres has admitted to being “delighted” by the emissions cheating scandal engulfing Volkswagen, writes Valerie Volcovici for Reuters. She said the scandal would force the German car giant to hasten its manufacturing of electric and hybrid vehicles. “If the ‘people's vehicle’ says we are going to make it accessible to everybody to get a (zero-emissions) car, we have a little revolution on the way,” Figueres, the executive secretary of the UN Framework Convention on Climate Change, said in Washington at a Christian Science Monitor event.