Renewable energies are likely to cover around 33 percent of Germany’s gross power consumption in 2015, research institute ZSW for solar energy and hydrogen and the German Association of Energy and Water Industries (BDEW) report. Renewables could produce around 193 billion kilowatt-hours (kWh) by the end of the year - up from 161 billion kWh in 2014 (a share of around 27 percent) - according to first estimates.

The Energiewende may have sparked controversy about rising power costs but many companies see the transition as an opportunity rather than a threat, writes Jennifer Rankin in The Guardian. Energy-intensive aluminium smelter Trimet has to innovate to adapt to the new conditions, while Northern German port city Bremerhaven has seen an increase in jobs thanks to the wind industry.

Consultancy Capgemini believes Europe urgently needs banking-style regulation to make nuclear decommissioning costs more transparent, reports Reuters. The consultants point out that gross provisions for decommissioning and long-term spent fuel management vary between 4.7 billion euros per reactor in Germany to just 1.2 billion in France, and 3.38 billion euros in Britain. "Establishing what methodology is used to estimate the overall cost is essential, but it is never explained in annual reports, with each player relying on the estimates of their own experts in that area," Capgemini said.

Read a CLEW factsheet on the costs of the nuclear phase-out here.

“The most important answers to the lignite phase-out”

Experts say it is still uncertain whether Germany’s power supply will remain stable when nuclear and some lignite plants are switched off, reports Jakob Schlandt, a regular contributor to the Clean Energy Wire, in an article for the Hamburger Abendblatt. “After the switch off of the lignite plants, and especially the nuclear plants, it could get tight with the power supply,” said Felix Matthes, research coordinator at the Institute for Applied Ecology.  “Politics has decided to make an experiment with an uncertain result.”
Coal power plant operators will gradually transfer 2.7 gigawatts (GW) of brown-coal capacity into an emergency standby reserve as of 2016, the energy ministry and utilities RWE, Vattenfall and Mibrag agreed in late October. All nuclear plants are to be switched off by 2022.

Read a CLEW article on the battle over the future of brown coal here.

“The scratch in the climate role model Germany”

Dominique Minten, from Belgian newspaper De Standaard, finds it paradoxical that a country whose ecological and energy policy is so famous still uses coal as its main power source. Giving a Belgian view on Germany’s energy transition in an article for the Frankfurter Allgemeine, Minten says the Energiewende has led to a large increase in renewable power but says issues such as decreasing green investment and a lack of grid expansion are posing problems.

“Technology with a residual term”

Power generated with biomass was once hailed as one of the Energiewende’s key technologies - but a political change of course spells its demise, writes Walther Rosenberger in Stuttgarter Zeitung. Even high-tech installations do not have a future after deep cuts in feed-in tariffs, because the technology is too expensive to compete with wind and solar, according to the article. Biomass energy producers and the industry have limited hopes for financial support, reports Rosenberger. “The aim is to avoid the existing 8,400 biogas installations rotting away after being switched off someday and only serving as a lesson for a failed green power support.”

“Refuel your car with sun at home”

Solar energy research institute Fraunhofer ISE has equipped a group of terraced houses in Southern Germany with novel energy management systems so rooftop solar arrays can directly charge electric vehicles. “The large PV arrays on the roof provide more energy in the long term than the inhabitants can use. The surplus energy can be fed into the grid and be used for daily trips with private e-cars”, explained Fraunhofer scientist Dominik Noeren in a press release. During a two-year test phase, Fraunhofer developed a specialised Android app which displays power flows in real time and tells residents about current consumption of their appliances, and whether energy is sourced from the grid or the solar array. It also gives a forecast for solar generation. The system then calculates the most efficient way to charge the battery in the electric vehicle.

“Consumers are sceptical when it comes to smart meters”

The compulsory installation of smart meters in homes is opposed by 60 percent of Germans, a YouGov poll of 2,000 people for power and IT company LichtBlick shows. Consumers are also sceptical as to what benefits they will get from the new technology. And, without an explanation, 90 percent are unsure about what a smart meter actually is. As of 2017, the government will make smart meters compulsory for consumers who use more than 6,000 kilowatt-hours a year. 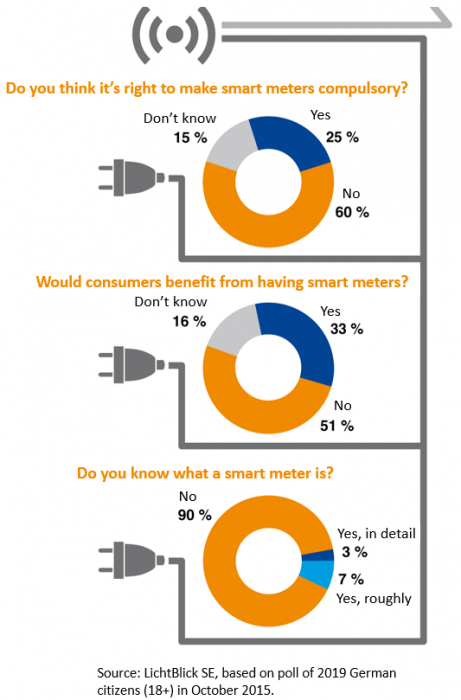