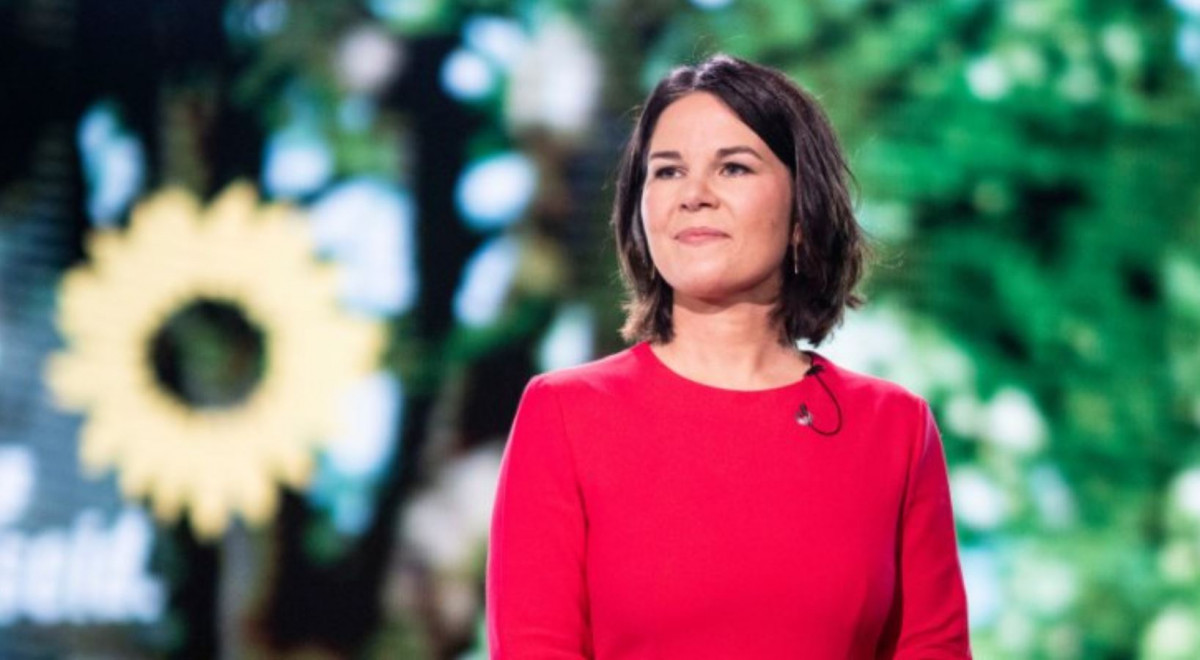 The German Greens opted for a moderate climate policy path at a party conference over the weekend and officially anointed party co-leader Annalena Baerbock as chancellor candidate for the September elections. Facing a recent dip in the polls, delegates followed a plea by party leadership and rejected calls for more radical and controversial steps to fight climate change.

Germany's Greens backed co-leader Annalena Baerbock as the party's first ever candidate for chancellorship and voted against more radical climate policies at a party congress over the weekend that was overshadowed by a recent slide in the polls.

In a show of unity, 98.5 percent of delegates confirmed Baerbock's candidacy and her leadership duo with Robert Habeck.

In her acceptance speech, Baerbock forecast a "duel" with chancellor Angela Merkel's conservative bloc. Merkel is not running for a fifth term, and her party has chosen Armin Laschet as candidate to succeed her in the chancellery after the 26 September election.

"For the first time in decades, real change is in the air," Baerbock told the delegates.

"We have been preparing for this for over 40 years. Now is the moment to renew our country. Everything is possible," Baerbock said, alluding to the party's history.

Baerbock apologised for mistakes she had made recently that were at least partly to blame for the drop in her party's popularity. She had to clarify her public curriculum vitae several times, and had failed to directly declare some payments from her party in her role as party leader.

The Conservative bloc has firmly taken back the lead from the Greens in recent surveys (see graph), reversing a lead following Bearbock's nomination. 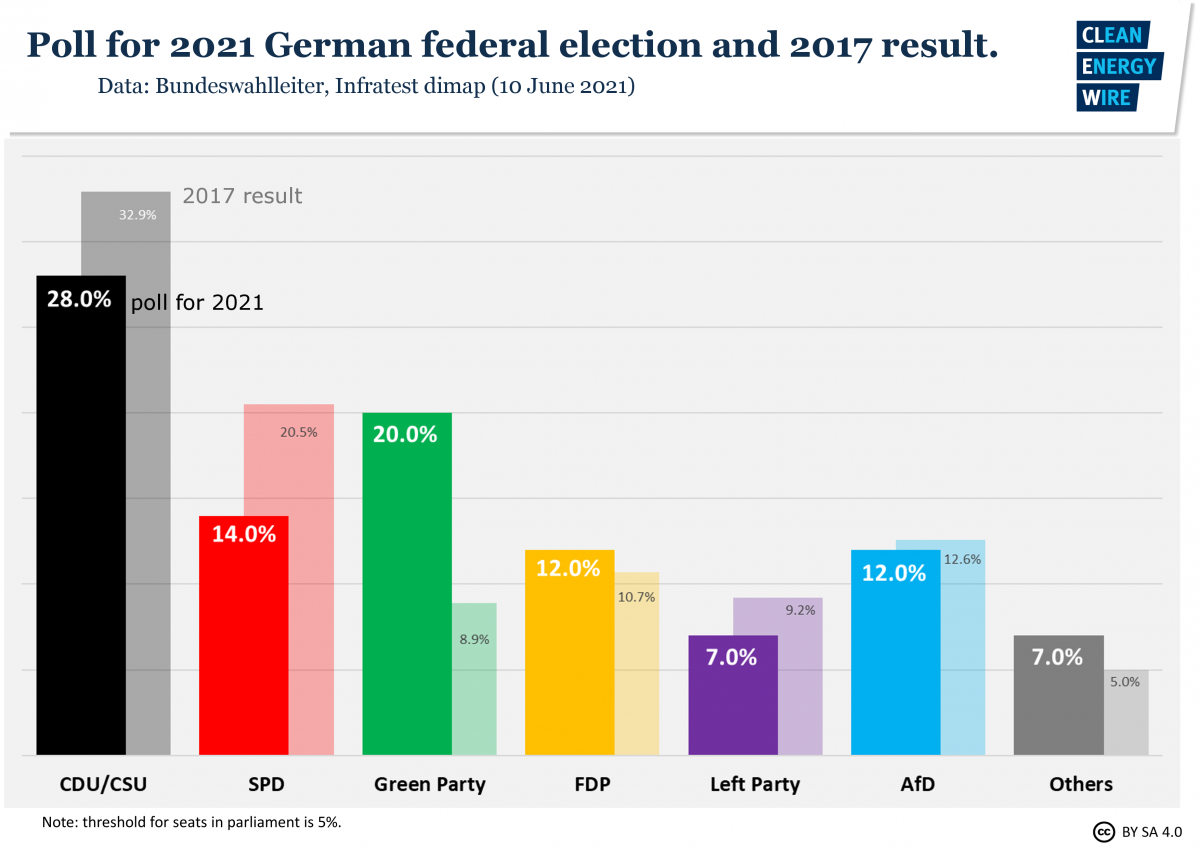 The Green's slide in popularity follows a fierce public dispute over the effects of carbon pricing on the price of petrol, a highly sensitive topic in German elections. Baerbock had spoken out in favour of a faster rise in the CO2 price than agreed by the current government of Conservatives and Social Democrats, a strategy also backed by many other politicians, industry representatives and other stakeholders. But opponents and parts of the media went on the attack, arguing that the Greens were neglecting the social consequences of climate policies.

Laschet, Baerbock's main rival in the elections, continued to attack the Greens' climate plans. "The energy transition must be socially acceptable. That's what I miss with the Greens," the CDU leader told newspaper Bild am Sonntag. "People with a higher income can easily afford 70 euros more for a flight to Majorca, but for many a family this can end the dream of a summer holiday."

The fight against climate change has become a key issue in Germany's election campaign. The issue continues to be a top concern for Germans even during the pandemic, and has fuelled the party's earlier ascent in the polls. Germany's climate movement, which includes student protest movement Fridays for Future, accuses the Greens of not doing enough to reach the target of limiting global warming to 1.5 degrees. 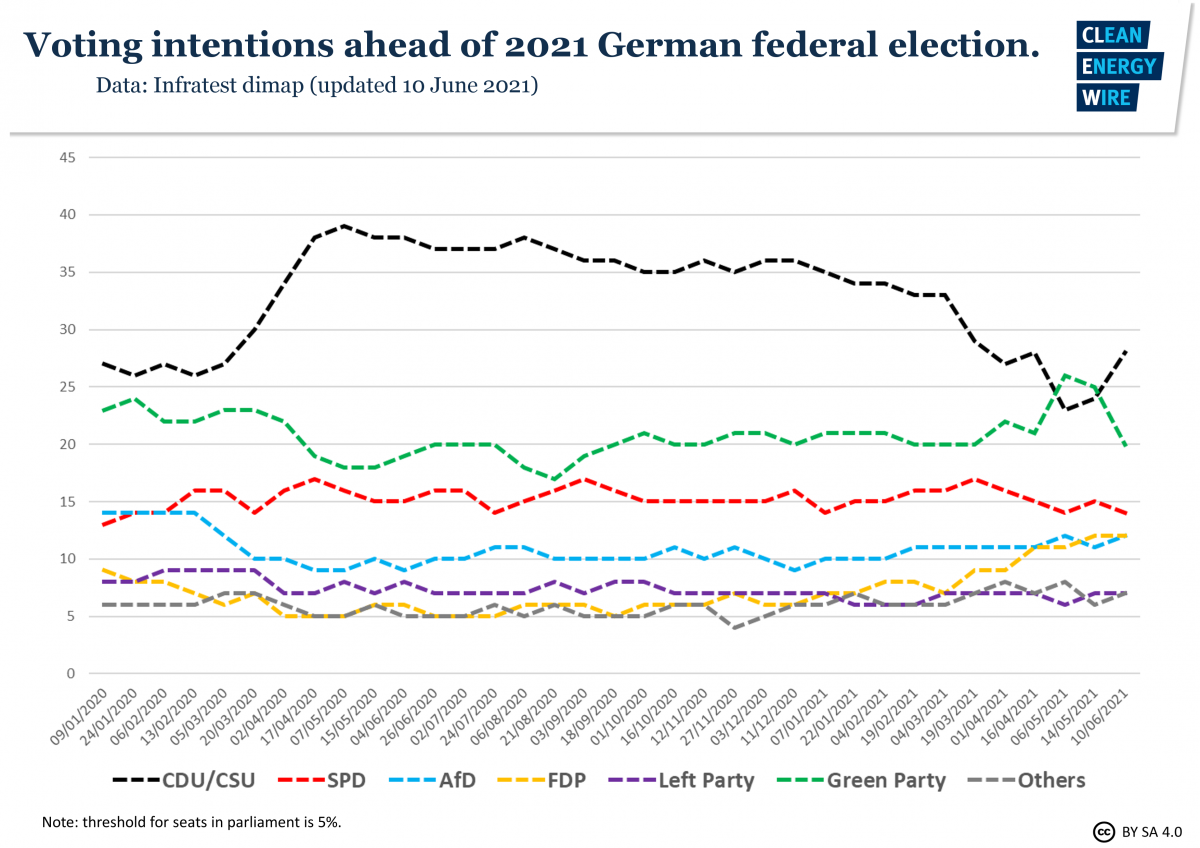 Rejecting calls for more radical policies to fight climate change, the party largely stuck to its draft manifesto during finalisation of the election programme.

Delegates had tabled over 3,000 amendments. These included a sharper rise in Germany's CO2 price for transport and heating to 80 euros per tonne by 2023 instead of 60 euros as stated in the draft, a lower speed limit on the country's rural roads of 70 km/h, and bringing forward the phase-out of combustion engine car sales to 2025 from the draft's target of 2030. But delegates followed a plea by party leadership and rejected these highly controversial changes.

But the congress resulted in many minor changes to the party programme, for example adding the target of doubling the number of cycling paths by 2030, and having 15 million electric vehicles on the road by that date.