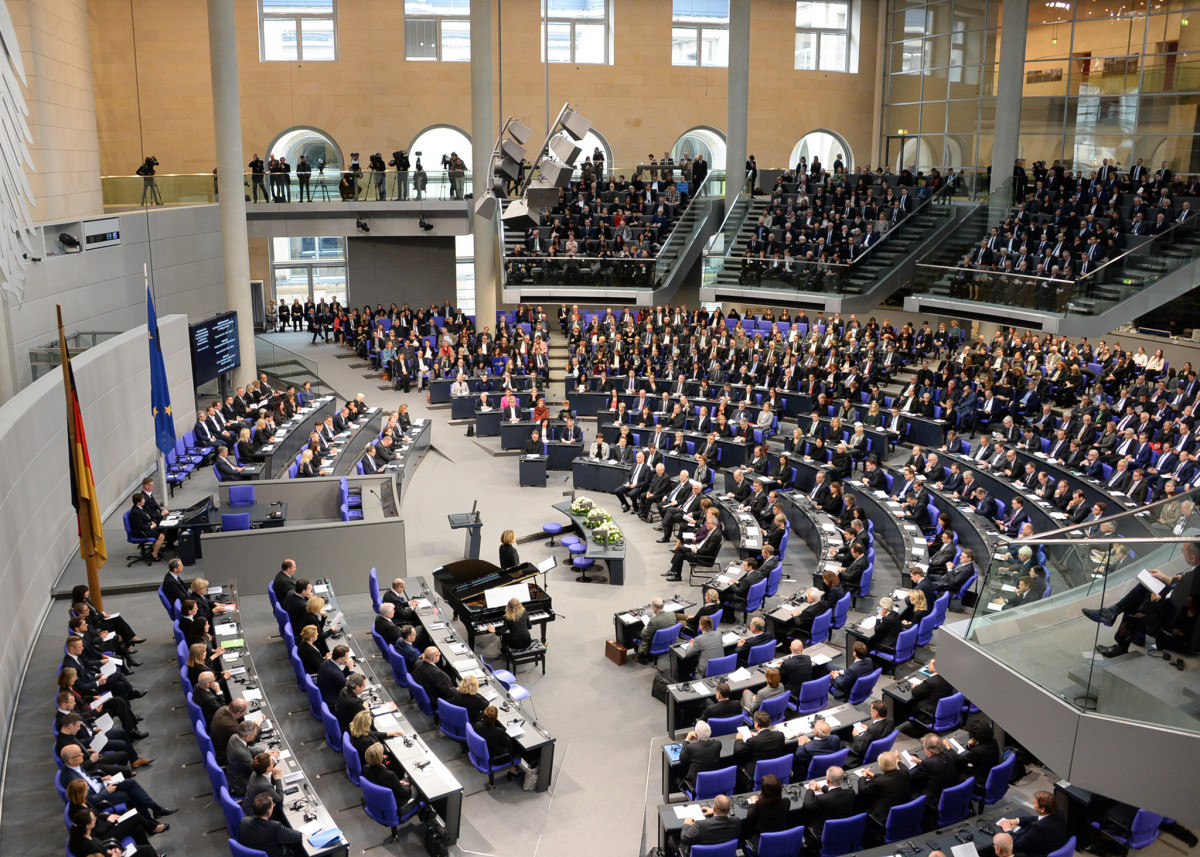 Germany is set to vote for a new government in autumn 2021. After 16 years at the helm of Europe's largest economy, Chancellor Angela Merkel will make room for a successor who will shape the country's energy and climate policy in the first half of a decade viewed as crucial for international emissions reduction efforts. With the COVID-19 pandemic still looming large and Germany and the EU poised to take momentous decisions for the goal of 2050 climate neutrality, Clean Energy Wire traces the steps leading up to the election and will highlight developments in climate and energy policy by all major parties in this regularly updated news overview [Updates to 31 October].

The governing Christian Democratic Party (CDU) has decided to hold a party convention in mid-January next year after it had to cancel a planned event in December due to tightened coronavirus restrictions in Germany, public broadcaster ARD reports. The party convention will be used to elect a new leader for Chancellor Angela Merkel's party. Whoever is elected  could likely also become her successor at the head of Germany's government after Merkel steps down in autumn 2021.

Germany's smaller government coalition partner, the Social Democratic Party (SPD), has called for the introduction of a European carbon border tax and a tighter EU emissions reduction target, news website Euractiv reports, citing a new party position paper. European emissions should be reduced by at least 55 percent by 2030 and a CO2 limit tax introduced if international climate talks do not produce satisfactory results fast enough, according to the SPD. A carbon border tax is currently being debated in the EU trilogue as part of its budget negotiations. The SPD says "a proactive European sovereign is essential" in order to make progress on global challenges such as climate change, migration and digitalisation and call for transforming the European Investment Bank (EIB) into a "climate bank" to fund climate-friendly projects in the context of the European Green Deal.

A rapid resurgence of coronavirus infection numbers across Germany has led Chancellor Angela Merkel's Christian Democratic Union (CDU) to call off a party convention scheduled for 4 December to elect a new party leader. The event, meant to bring together about 1,000 delegates of Germany's largest party in Stuttgart to make a choice between the three top candidates, Armin Laschet, Friedrich Merz and Norbert Röttgen, will be postponed. The CDU is expected to decide on a new course of action on 14 December, Reuters reports, citing party secretary Paul Ziemiak. The party convention that is supposed to find a successor for current leader Annegret Kramp-Karrenbauer and a possible CDU chancellor candidate initially had been scheduled for April 2020 but also had to be called off at the time due to the coronavirus outbreak earlier this year.

The three candidates for leadership of Germany's largest party, the conservative Christian Democratic Union (CDU) of Chancellor Angela Merkel, have all signalled that they consider climate action and sustainability to be defining political challenges for the country in the next decade. At a debate event organised by the CDU's youth organisation Junge Union, the candidates Armin Laschet, Friedrich Merz and Norbert Röttgen, gave a "pitch" to the party youth to help CDU delegates pick their favourite candidate.

The German Greens have proposes a future transport policy that puts a clear focus on electric mobility and restricts the use of hydrogen on the road to heavy-duty trucks. A party resolution also called for increasing the share of renewable energies in transport "to 30 percent in 2030 and to 100 percent well before 2050.”

The Green Party is calling for a radical rethink of transport policy by putting a moratorium on the construction of new motorways and state roads. "The plans for autobahns and federal highways must be fundamentally reviewed for compliance with climate goals," says Anton Hofreiter, head of the party's parliamentary group.

Climate activists want to get small and niche parties to unite as one political party to overcome the five percent threshold to gain seats in parliament after the 2021 national election. “There is no party in the German Bundestag that stands up for socially just climate action and the 1.5 degree Celsius target,” says Bianca Praetorius, co-founder of the initiative United4Bundestag.

Chancellor Angela Merkel has thrown her weight behind the European Commission’s proposal to increase the bloc’s climate target to a 55 percent greenhouse gas reduction by 2030. Speaking in federal parliament, she said the country's current EU Council presidency would work towards achieving a unanimous decision by all EU member states by the end of the year.

The Green party crowns a recent surge in local elections in North Rhine-Westphalia, Germany’s most populous federal state, with wins in mayoral run-offs in several big cities, including Bonn, the seat of the UN’s climate body, the UNFCCC. The results highlighted the party’s strength as Germany is heading into a federal election year.

With numerous protests across Germany, the Fridays for Future youth movement has taken aim at pushing climate action to the very top of the political agenda in the run-up to the country's general elections next year. The activists don't want to side with any party and instead plan to put pressure on politicians across the spectrum to act according to the Paris Agreement, a spokesperson told Clean Energy Wire. But some of the movement's prominent members are running for a seat in parliament as members of the Green Party, leading to splits in the movement.

The right-wing nationalist AfD party has called for an end to all major climate action efforts Germany has committed itself to and wants to abandon both the Paris Climate Agreement and the European Green Deal. One year before the general election in autumn 2021, the party that holds 12.6 percent of the seats in the German Bundestag thereby firmly positions itself as the only one in parliament that is openly opposed to emissions reduction efforts.

The conservative CDU has emerged as the strongest party in municipal elections in Germany's most populous federal state, North Rhine-Westphalia (NRW), public broadcaster WDR reports. With 35.2 percent of the votes, the party of Chancellor Angela Merkel and state premier Armin Laschet lost 3.2 percent compared to the previous election and achieved its worst ever result in municipal elections in the state but still secured the first place by a wide margin.

One year before Germany's next general election, economy minister Peter Altmaier calls for a "historic consensus" between all democratic parties, businesses and civil society to ensure that climate action and the decarbonisation of the economy do not become pawns in election campaigns. The conservative politician called rapid and determined measures to curb global warming "the key task of our generation" and warned that especially young people could become alienated from politics if lawmakers failed to act on their concerns about climate change.

Altmaier's ideas were received with surprise and suspicion by energy and climate stakeholder groups in the country.

Germany’s achievements in the field of climate and energy policy mustn’t mean that the country becomes complacent now, Olaf Scholz, finance minister and the Social Democrat’s candidate for chancellor in the 2021 elections has said.

Germany has made decisive steps in regards to the climate challenge in past years, but efforts have to increase, Chancellor Angela Merkel told journalists during her annual press conference in Berlin. “For very real reasons, we will accelerate rather than slow down our efforts here in the coming years, because we can see that when climate change threatens our livelihoods, but even more so the livelihoods in Africa - it has something to do with flight and migration,” the chancellor said.

Splits as Fridays for Future activists run for parliament

Several members of Fridays for Future (FfF) Germany have declared their intention to run for federal parliament, exposing divisions within the non-partisan climate movement, taz reports. Jakob Blasel, one of the organisation’s spokespeople, and Urs Liebau, an activist, both said they would run on a Green Party ticket in federal elections next year.

Parliamentarians from Chancellor Angela Merkel’s conservative CDU/CSU alliance are calling for a “bold” reform of renewables laws and regulation to ensure the success of the energy transition and climate action. In a paper entitled “Impulses for the EEG reform” (EEG = Renewable Energy Act), the Conservative’s “climate group” says that the continued operation of old solar panels and wind turbines which will stop receiving fixed feed-in tariffs after a 20-year period is a particular challenge.

The German Social Democrats (SPD) will make the transformation towards a more sustainable economy a key topic of their campaign for the 2021 general elections, the SPD's freshly nominated candidate for chancellor, Olaf Scholz, has said. Halting human-made climate change would be an "indispensable task that has to be resolved at a high pace”, Scholz said The current finance minister and vice chancellor stressed that Germany's strong industrial basis is and remains to be an asset that the country has to protect.

Germany's Social Democrats (SPD) have nominated current finance minister Olaf Scholz as the party's candidate for chancellor. This marks the first major move from one of the country's larger parties in preparation for the parliamentary election in autumn 2021.