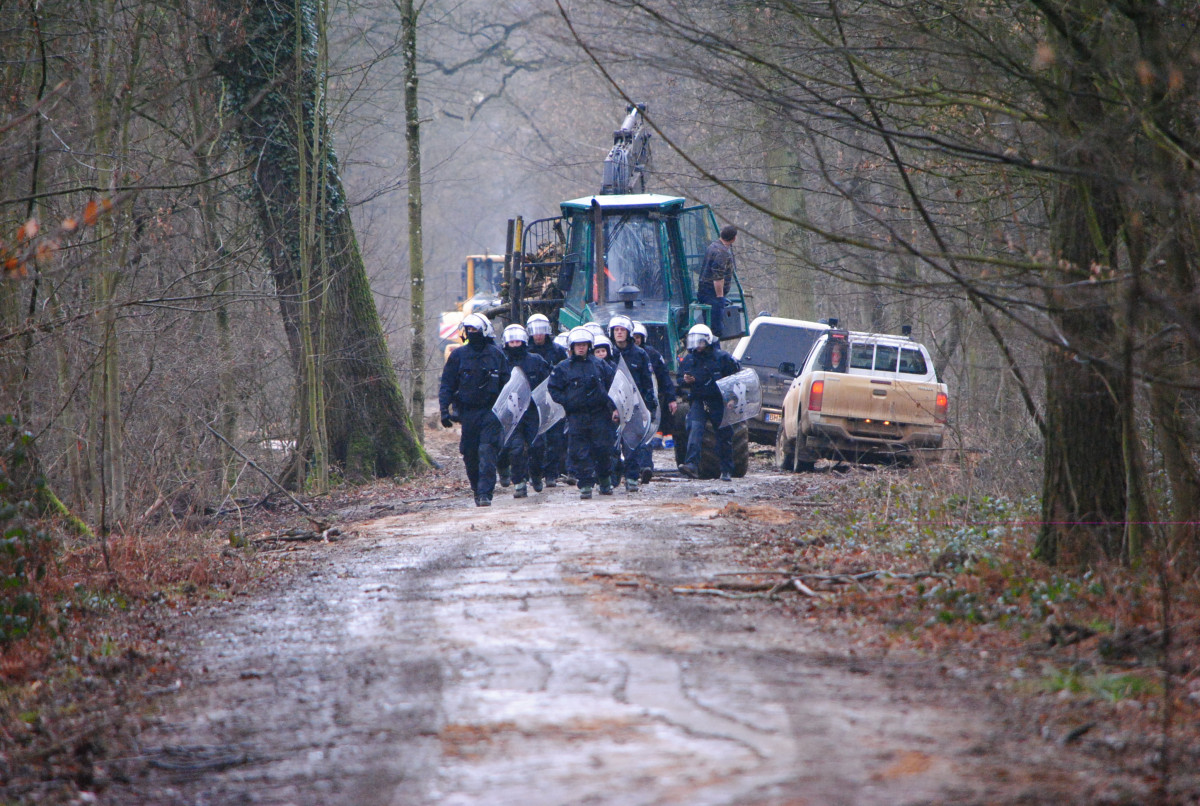 The eviction of coal protesters in the Hambach Forest in 2018 was illegal, a court ruling in German state North Rhine-Westphalia found. The forest threatened by a nearby lignite mine had become a symbolic battleground in the context of the country's coal phase-out debate and was ultimately saved by the coal exit agreement. But the handling of the protest by conservative state premier Armin Laschet has continuosly been criticised even after the agreement - and the ruling could now further damage Laschet's bid to become Germany's next chancellor.

The eviction of climate protesters in Germany’s embattled Hambach Forest in autumn 2018 by the state government of North Rhine-Westphalia (NRW) was carried out under a false pretext and violated the law, a court in the city of Cologne ruled on Wednesday afternoon. According to the court, the police operation authorised by the government of NRW state premier Armin Laschet, chancellor candidate of the governing CDU/CSU alliance, “pretended” to enforce fire protection rules in a tree house protest camp.

The tree houses had been constructed since 2012 by activists protesting against the expansion of the nearby lignite mine operated by energy company RWE. On 13 September 2018, authorities amassed police forces around the camp who then proceeded to evict residents and tear down the tree houses and other buildings, leading one resident to sue against the eviction. The court argued that ministry orders had left little doubt that “the ultimate aim had been to remove protesters” from the forest, rather than ensuring their safety. The ruling is not yet legally binding.

The Hambach Forest had become a symbolic battleground for climate activists from Germany and across Europe in the run-up to the country’s coal phase-out decision finally sealed in 2020, which explicitly guaranteed that the woodland bordering the Garzweiler mine near Cologne would not be cut down further. Large-scale protests had been staged in and around the forest and police, RWE employees and climate activists had clashed  on various occasions over the years. The 2018 eviction had also led to the death of a journalist through an accident.

The court ruling comes at a difficult time for conservative top candidate Laschet’s bid for the chancellery, which is faltering some two weeks before the vote on 26 September. Laschet started out as the heir-apparent to fellow conservative Angela Merkel after winning an internal party contest at the beginning of the year. But his campaign has struggled since, not least after a ham-fisted reaction to the deadly floods which hit Germany in July, which opponents used to criticise Laschet’s industry-friendly attitude in the coal exit talks.

The ruling showed that Laschet “often does not act upon a legal basis,” said Christoph Bautz, head of NGO Campact. “Just like with the coal plant Datteln 4, he’s bending the law regarding the Hambach Forest until the courts stop him,” Bautz said, referring to Germany’s newest coal plant that started operation last year after receiving strong backing from the NRW government. “Climate action does not stand a chance with him,” Bautz argued.

Green Party politician Oliver Krischer argued that Laschet’s decision to evict protesters now had been revealed as a mere service to the coal industry. “It’s official now that he had the forest vacated under an illegal pretext in order to do RWE a favour,” Krischer said in an article in Der Spiegel. The company that wields great influence in NRW state politics had found “willing sidekicks” in the Laschet government that had authorised one of the biggest police interventions in the state’s history, he said.

One day before the ruling, the CDU/CSU alliance received its worst-ever polling result in Germany’s post-war history, with pollster Forsa seeing them at only 19 percent, down from 33 percent in 2017. The CDU/CSU now could be replaced as the strongest party by its current smaller coalition partner, the Social Democrats (SPD), who to many observers’ great surprise have pulled of a last-minute hike in polls and now firmly lead with their top candidate, finance minister Olaf Scholz.