The coat of arms of Baden-Wurttemberg (left) and of Rhineland-Palatinate on the German national flag. Source: Public Domain

"Super election year" 2021 in Germany has been kicked off with a resounding defeat of Chancellor Angela Merkel's conservative CDU in two state elections that saw the party incur historic losses. For the rivalling Green Party and the Social Democrats (SPD), the votes in Baden-Württemberg and Rhineland-Palatinate have brought fresh hope that the conservatives' sway might fade away when popular long-time leader Merkel retires after the national elections in September. The Green Party was able to celebrate record win in wealthy state Baden-Württemberg. It also largely fended off competition from a new climate party launched only months earlier that has vowed to sting the Greens into demanding even more ambitious climate policy. Only losing a few percentage points to the 'Climate List' could hamper the Greens' prospects for forming a centre-left coalition that could bring the country its first Green chancellor.

A historic defeat for the country's governing conservative CDU party in two state elections has botched up the start into Germany's "super election year" 2021. The party of Chancellor Angela Merkel suffered substantial losses in state elections in both Baden-Württemberg and Rhineland-Palatinate and failed to snatch away the reins of power from the rival Green Party and the Social Democrats (SPD), respectively. In a year of four more state ballots and the federal election on 26 September, the results bode ill for the conservatives' plans to remain Germany's unchallenged party of government after the still widely popular Merkel retires this autumn. For the Green Party, a strong showing in the state elections bolsters its hopes to join the next government coalition at the national level.

In the affluent south-western state of Baden-Württemberg, Green state premier Winfried Kretschmann secured himself a third term with a record 32.6 percent of the vote, while the CDU obtained its worst result ever in the state, securing only 24.1 percent, preliminary results showed. The CDU had dominated the state renowned for its very strong industrial base, especially in the automotive sector. But a sweeping victory by the Greens that saw them take the lead in almost every age group suggests that a more permanent shift away from the conservative camp has taken place in the state of about 11 million inhabitants. The result might allow the Greens to end the current coalition with the CDU and instead seek to form a government with the centre-left SPD (11%) and the pro-business FDP (10.5%). The far-right AfD, which shed the largest share of votes compared to the last election in 2016, came in as the smallest opposition party with 9.7 percent. It has no hope of participating in a government coalition. 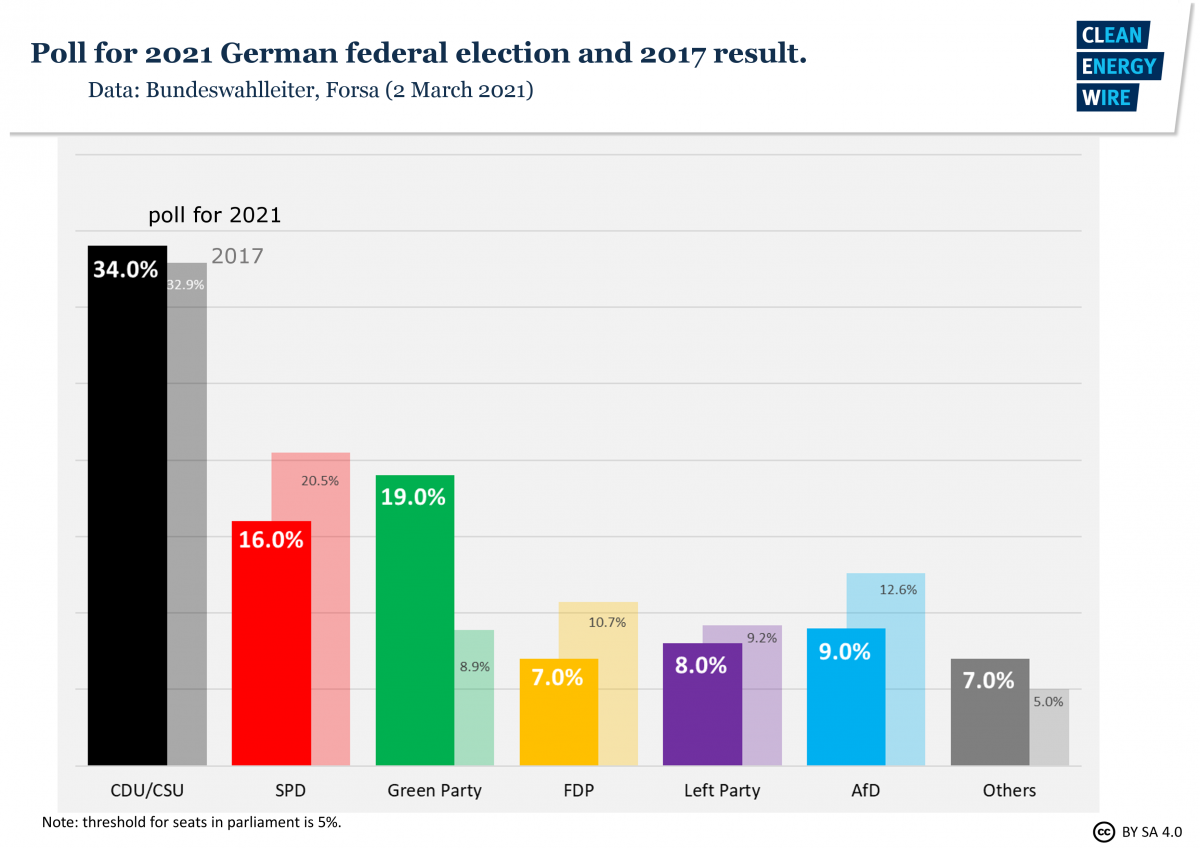 The CDU/CSU alliance still polls strongly at the national level.

"The Greens are the clear winners of the day. They were able to gain votes across the board and substantially strengthen their position in Baden-Württemberg," political scientist Jürgen Falter from the University of Mainz told Clean Energy Wire. The Greens under Kretschmann now have a choice for the next government coalition between continuing their partnership with the CDU and new a tripartite coalition with the SPD and the FDP, Falter said. "If the CDU leaves the government, this would probably have a big impact on the state's energy policy, for example boosting the construction of wind power turbines," he added. Despite being Green-governed since 2011, Baden-Württemberg still has a much lower renewable power share than many other German Länder. "Regarding the national elections in September, the state’s voters have made a government option that excludes the CDU/CSU alliance more imaginable, for example the Greens together with the SPD and the Left Party or even a model that includes the FDP," Falter said.

The Greens in the state that more than most others in Germany has its fate tied to the health of the country's mighty car industry were also able to largely fend off previously unknown competition from the environmentalist camp, with the newly founded Climate List (Klimaliste) only gaining just under one percent of the vote and thus failing to enter parliament. But even though the list only gained a tiny fraction of the votes, these might have cost the Greens and other parties the chance to form a coalition against the conservatives. Media commentators on Twitter pointed out that the 0.9 percent share could possibly have been enough to allow a centre-left Green-SPD coalition and keep the FDP and CDU out of government.

Alexander Grevel, founder of the Climate List Baden-Württemberg, said it had made a contribution to "push climate justice to the top of the political agenda." His party, which holds that the Greens have become too business-friendly and flexible on their climate commitments as they establish themselves in Germany's political mainstream, would now discuss the next steps before this autumn's federal elections, where a similar effect on possible could occur. "We will be back soon," Grevel said.

State premier Kretschmann made it clear right after the results were published that his party understood the victory as a mandate for a more committed climate policy. For Baden-Württemberg’s Greens, three priorities would be commanding over any coalition talks: "Firstly climate action, secondly climate action and thirdly climate action," Kretschmann said, calling global warming "the challenge of the century" that allows no further restraint.

In neighbouring but much smaller Rhineland-Palatinate, the Social Democrats’ (SPD) top candidate, Malu Dreyer, performed exceptionally well and defended her claim to lead the largely rural but well-to-do state's government by obtaining 35.7 percent of the vote. The result gives the SPD a welcome boost as it struggles to regain its position as the conservatives' main rival at the national level, a position currently held by the Greens. It also spurs hopes that Merkel's departure in September could open a door for the Social Democrats’ candidate for chancellor, finance minister Olaf Scholz, to consider new government coalition options at the national level. In Rhineland-Palatinate, the SPD can continue its tripartite coalition with the Greens (9.3%) and the FDP (5.5%), whereas the CDU saw its weakest-ever result in that state, garnering only 27.7 percent support.

"In Rhineland-Palatinate the Greens also made gains, although they are nowhere near their strength in Baden-Württemberg. But it might still be a signal for more ambitious climate policy plans," political scientist Falter said. While the Green Party's result of just under 10 percent in the state reflects its ongoing difficulties to become popular among rural voters outside Baden-Württemberg, municipal elections in the neighbouring central German state of Hesse underlined the party's growing success in larger cities. The party became the strongest faction in Germany's financial capital Frankfurt am Main and most other urban centres in the state led by a CDU premier.

Duel for Chancellor candidate duel in conservative camp heating up

The regional votes' results generally could not be considered a general bellwether for the national ballot in September due to popular state candidates and local topics dominating the debate, Falter said. "The CDU is still faring much better at the national level than it does in the two south-western states. The Greens' growing strength in Baden-Württemberg does not reflect their countrywide performance," he argued. But the bad performance of the CDU in both state votes would not help the party's newly elected leader Armin Laschet in his bid to lead the conservatives into a successful election campaign. Laschet, who also acts as premier of Germany's most populous state of North Rhine-Westphalia, is seen as one of the most likely contenders to succeed Merkel as chancellor. His greatest rival at the moment is neither the SPD's Scholz nor the yet-to-be-named top candidate of the Greens, but fellow conservative Markus Söder, state premier of economic powerhouse state Bavaria and head of the CDU's smaller regional sister party CSU, with which it forms the conservative camp.

"Laschet definitely did not benefit from the two election results," Falter commented, even though the CDU was trying to avoid the impression that the state parties' defeat is linked to its national leader. A further factor that could have damaged the CDU's performance had been an affair about conservative MPs resigning over protective mask procurement deals they reportedly used for personal gain during the coronavirus crisis in spring 2020 and a growing discontent among the electorate about the CDU ministers' management of the pandemic in general -- shortcomings that party leader Laschet ultimately might be held accountable for.

His rival Söder was quick to call the defeat of the CSU’s sister party in the state vote "a heavy hit" for the conservative camp and used the occasion to lecture the CDU about "possible coalitions beyond the conservatives" if no coherent response is found. Contrary to Laschet, Söder has already said repeatedly that a coalition with the Greens would be a very attractive option after the federal elections, which many regard as the conservatives' safest bet to provide the chancellor.