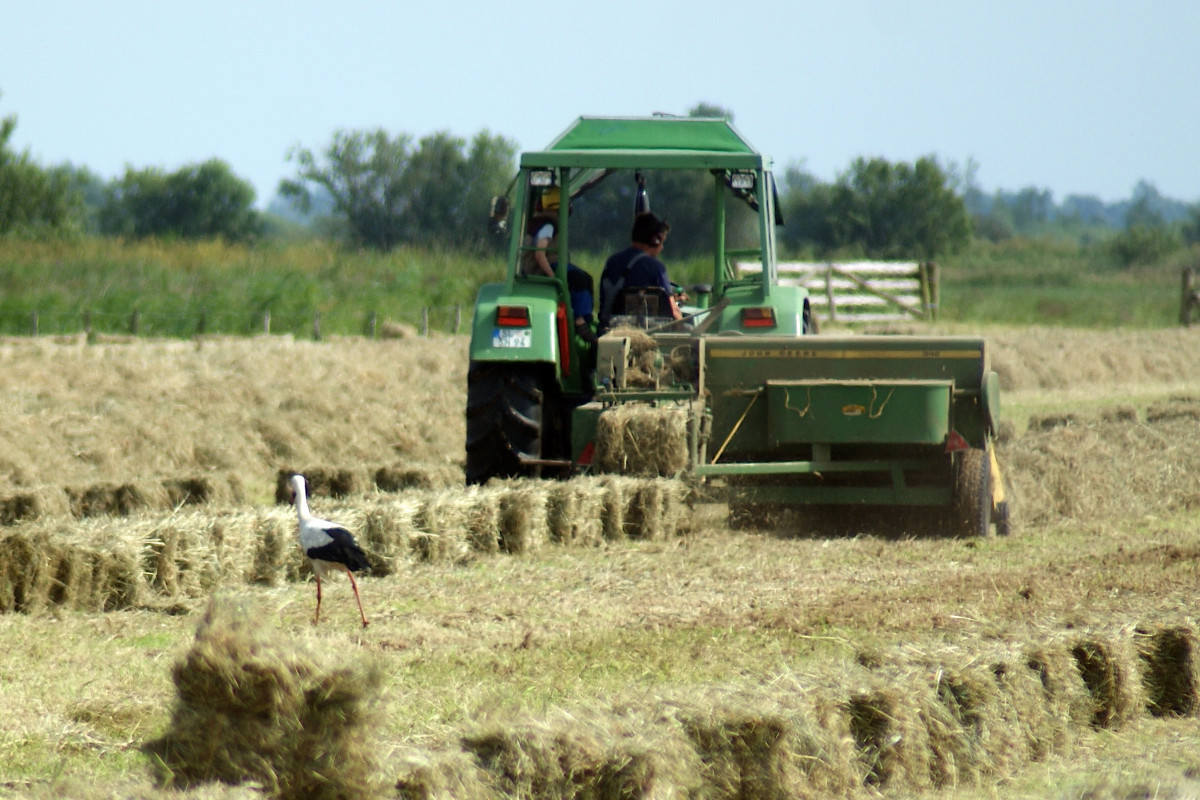 The German agriculture ministry has proposed six voluntary environmental measures to make the country’s farming sector more sustainable and climate-friendly. Its draft plan on how Germany will spend EU agricultural subsidies as of 2023 features more fallow land, protection of grass- and peatlands, and more home-grown animal feed, but critics say none of this is enough to achieve climate targets or ensure a sea change in the sector that reconciles farmers’ livelihoods and environmental protection.

A larger share of farming subsidies from the EU budget should be used to support climate and biodiversity-friendly agriculture in Germany, the country’s federal agriculture ministry (BMEL) has proposed, but its suggestions have been met with doubts and criticism from both farmers and environmentalists. The ministry wants to use 20 percent of the money from direct payments to farmers on a hectare basis in so-called eco-schemes – environmental protection measures that farmers can follow voluntarily in order to receive extra funds. Ringfencing 20 percent (900 million euros per year in Germany’s case) for this purpose is the minimum amount decided by the European Council at the end of 2020, with the European Parliament opting for a minimum of 30 percent.

“The aim is for agriculture to make an even greater contribution to environmental, climate and species protection and thus to preserving its own economic basis,” agriculture minister Julia Klöckner said in the beginning of March when the proposal’s key points were first announced. However, her critics from environmental NGOs NABU, BUND, Greenpeace and WWF Germany called the plan rushed and said its ambition level “in no way meets the challenges facing agriculture in this decade and clearly contradicts the goals of the European Green Deal.”

EU lawmakers have not made a final decision yet on the framework of the Common Agricultural Policy (CAP) from which the funds for the farming subsidies in member states are disbursed, with negotiating parties differing widely in some areas and the process expected to continue well into the second quarter of 2021.

Klöckner’s early proposal therefore risked Germany getting into trouble before the EU Court of Justice, the NGO’s warned. On using 20 percent of CAP funds from the direct payment pillar towards eco-schemes, they said: “There is still far too little money to specifically promote concrete agri-environmental and climate services. This means that farmers cannot make the contributions to biodiversity and climate protection that many of them would like to make”.

Germany receives around 6 billion euros per year from the EU’s Common Agricultural Policy, which will enter a new funding cycle as of 2023. The multiannual budget for the next funding period (running till 2027) will amount to 387 billion euros, around 26 percent of the EU’s total budget. With its 2020 Farm to Fork and Biodiversity strategies, the European Commission has pledged to decrease the carbon footprint of the food system and make farming more sustainable. With the new CAP, Farm to Fork objectives, such as farming 25 percent of EU agricultural land organically or lowering fertiliser use by 20 percent, should determine the way subsidies to farmers are allocated.

Eco-schemes as proposed by the German agriculture ministry

The eco-schemes chosen by the ministry include: increasing the size of non-productive areas and landscape elements and enhancing them by planting flowering or grass strips; planting of legumes (protein crops) for animal feed; extensifying permanent grassland (fewer animals, less fertiliser); grazing premiums for sheep, goats, suckler cows; and maintaining agroforestry systems on arable land or permanent grasslands. These suggestions are part of a list of potential eco-schemes published by the European Commission in January 2021.

The next funding period for the Common Agriculture Policy (CAP) will run from 2021 to 2027 although its late adoption in the beginning of 2021 means that it will start with a delay in 2023.

In their budget decision of July 2020, the European member states agreed to fund the CAP with a total of 387 billion euros. 258.594 billion euros are assigned to the first pillar and 77.85 billion euros to the second pillar. The CAP budget makes up around 40 percent of total EU spending.

In addition to the eco-schemes, the ministry’s CAP plan stipulates that “at least three percent of arable land must be set aside by farmers as non-productive land or landscape elements” and no conversion of permanent grasslands may occur in peatlands and wetlands. This applies to all farming operations receiving CAP funds (so-called enhanced conditionality).

Eight percent of funds from the first pillar of the CAP (direct payments per hectare) will be shifted to the second pillar (previously 6%), where it is used, inter alia, to promote organic farming. The 400 million euros per year will be used by the German states for the “promotion of climate and environmental protection measures, strengthening competitiveness and rural areas,” the ministry writes.

Farmers’ association AbL said the ministry had failed to adequately harness the opportunity of eco-schemes – using 20 percent of pillar 1 funds towards them was not sufficient to meet the ecological and economic challenges of farmers. An annually increasing level of these funds, starting at 30 percent, would be needed. They also said that important eco-schemes, such as rewarding reduced pesticide and mineral fertiliser use and small-scale farming, had not been included.

A 2020 report for NGO Germanwatch by the Institute for Applied Ecology (Öko-Institut) suggested that significant greenhouse gas reductions could only be achieved by eco-schemes that tackle livestock farming, i.e. linking the number of especially ruminants to the forage area.

Farmers’ association DBV welcomed the eco-schemes as proposed by the ministry but criticised the increased shifting of funds from the first to the second pillar of the CAP as something that would “weaken” farming operations and cause more red tape.

NGO Environmental Action Germany (DUH) said the draft law of the agriculture ministry is “backward-looking and does not provide effective instruments for more climate and species protection.” The DUH criticised that large, industrial farming operations would continue to receive “flat-rate subsidies.” “With the draft law, the national obligations for climate and species protection as well as for air pollution control and water protection in agriculture cannot be met,” DUH director Sascha Müller-Kraenner said.

The final version of the CAP 2023-2027 is still wanting, but negotiations between the European Council, Commission and Parliament (trilogue) are expected to come to a head in the next weeks.

In Germany, the federal agriculture minister will hold talks with her counterparts from the states on 17 March and wants to present her draft bill for the CAP strategic plan to the government cabinet on 24 March. In the meantime, the EU Agriculture Council (agriculture ministers of the member states) will meet on 22 and 23 March, after which the three-party negotiations between EU lawmakers will continue.

To receive funding in the next budget period, all member states have to submit so-called CAP strategic plans that detail how they are planning to implement the CAP rules, something made rather more difficult if the text from the EU has not been completed, AbL has pointed out. The draft law presented by the ministry includes Germany’s CAP strategic plan. It will have to be passed by the German parliament, which the agriculture ministry expects to happen before the summer break. The final plan must be submitted to the European Commission before 1 January 2022.