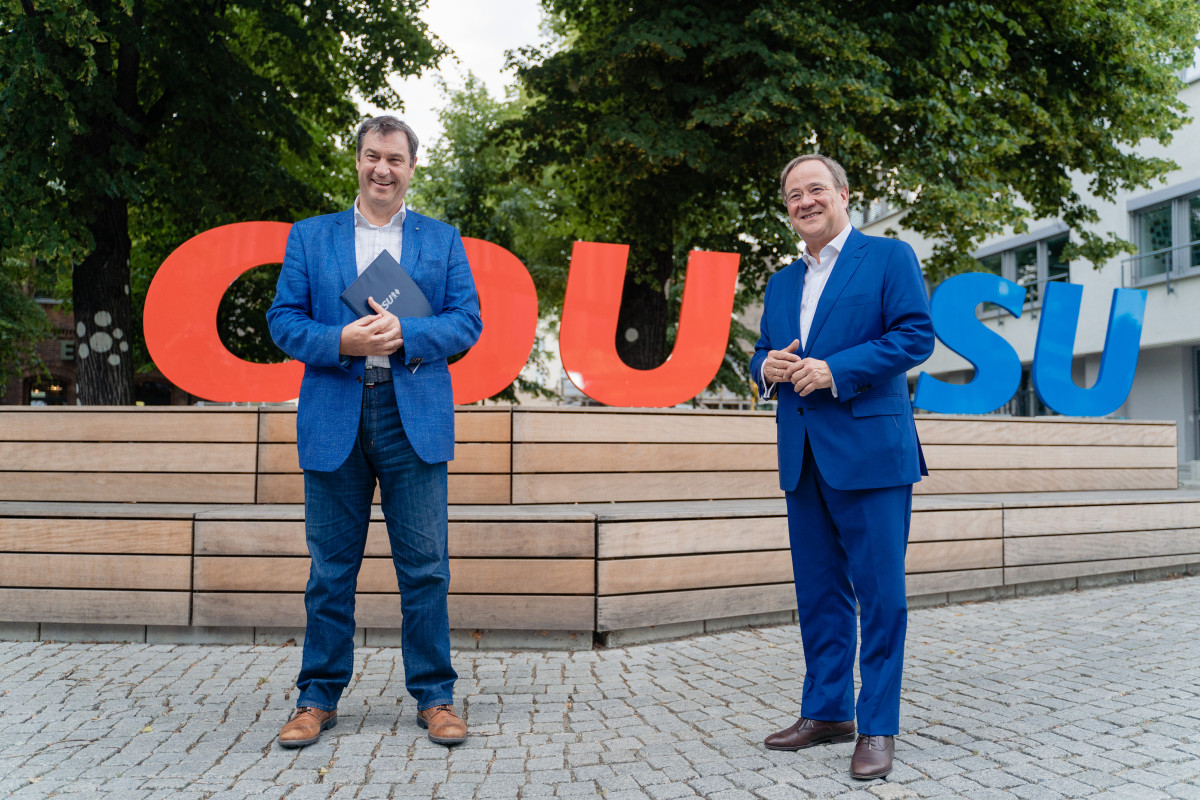 The manifesto of Germany’s conservative CDU/CSU alliance for the upcoming national election remains vague on climate and energy, leaving plenty of leeway for possible government coalition negotiations with competitors like the Green Party. The bloc of chancellor candidate Armin Laschet presented an election programme which signals continuity with policies of outgoing leader Angela Merkel. Conservatives aim to make Germany a “climate neutral industrial nation” by 2045 – a target the government recently decided already – and bet on European carbon pricing to bolster German climate action. Other parties, NGOs and climate activists criticised the programme for its lack of ambition and detail on how to reach climate neutrality. Media commentators wrote that the lack of clarity, for example on CO2 pricing, is meant to avoid upsetting voters who still support climate action in general, but show reluctance towards changing their own behaviour or investing more of their income.

Germany’s conservative CDU/CSU alliance has presented a 2021 national election manifesto with few details on how to use the coming years to help transform the European powerhouse into a climate neutral economy by 2045.

Conservatives put innovation, technological leadership and economic growth at the heart of their climate chapter and call for a “decade of modernisation” in the 2020s. They see their goal of reaching climate neutrality by 2045 as Germany’s contribution to following the 1.5° path internationally.

However, political opponents and NGOs were quick to criticise the manifesto for its lack of detail and ambition. The Greens' candidate for chancellor Annalena Baerbock said the CDU/CSU fail to explain how they intend to finance many of their promises and of not being bold enough, reports Welt. She said it was a business-as-usual programme, following the motto “close your eyes and hope for the best”.

The programme reminds of outgoing Chancellor Angela Merkel’s campaign slogan “you know me”, writes Sabine Henkel in an opinion piece for public broadcaster ARD. Chancellor candidate Armin Laschet and his bloc regard climate change as “one problem among many and offer hardly any possible solutions”, she writes. The conservatives “obviously do not not want to alienate anyone, certainly not the core electorate and car drivers”.

Omitting details on instruments and measures to reach climate neutrality by 2045 could also provide necessary leeway in coalition talks with political competitors after the vote on 26 September, such as the Green Party. The Greens are currently the second-strongest party in national polls and a coalition without them seems unlikely.

Chancellor candidate and North Rhine-Westphalia state premier Laschet is currently the top contender to succeed Merkel as head of government following Germany’s federal election. The climate and energy issue is expected to have a major impact on this year’s election as rising temperatures, severe drought and climate protests have put emission-reduction efforts at the top of the agenda. 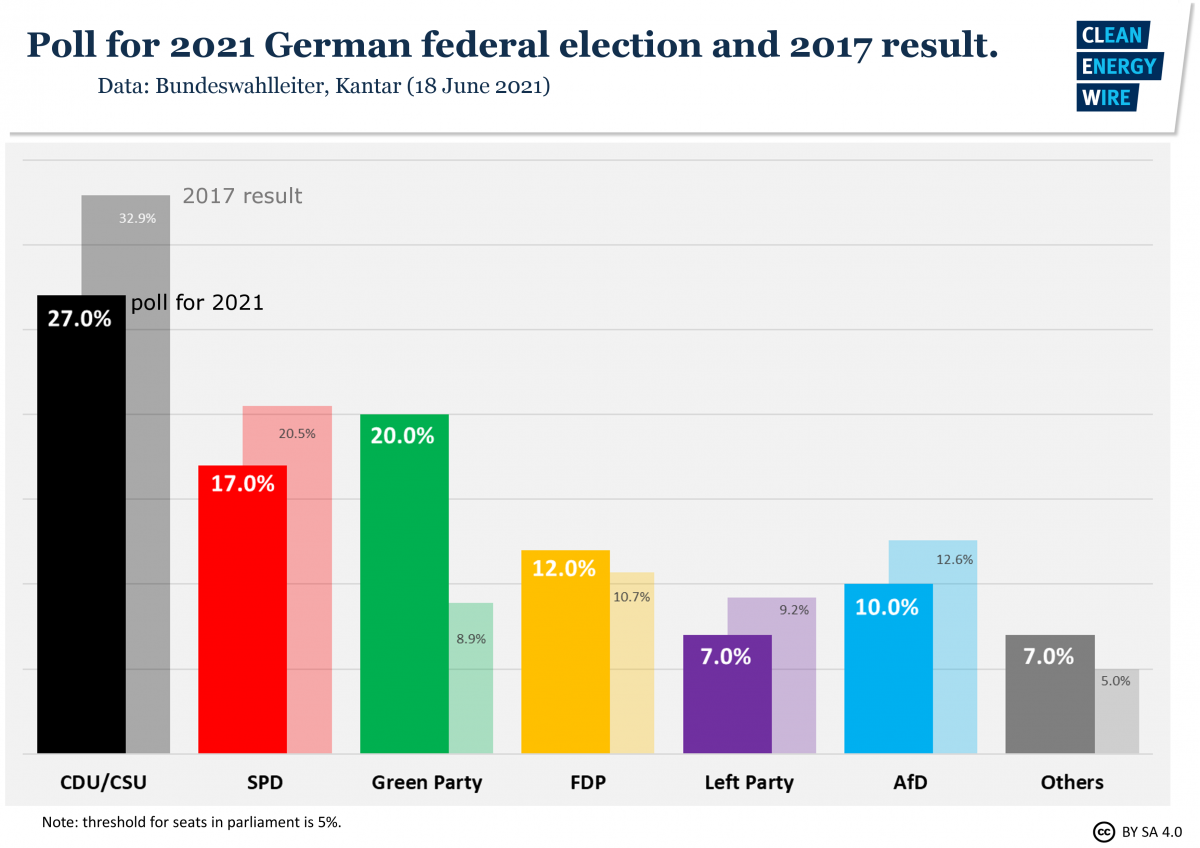 The conservatives clearly bank on joint European initiatives to bolster German energy and climate policy. “We have deliberately placed Europe and international relations at the beginning of our programme” as the party aims to tackle global challenges such as climate change together with its partners, said Laschet.

A key area is CO2 pricing. Conservatives’ long-term goal is a comprehensive European emissions trade with a uniform price. To get there, they call for expanding emissions trading to the transport and heating sectors.

Since the start of 2021, Germany has a fixed national carbon price in these sectors, and parties have had heated election campaign debates about its future growth path – a sensitive issue as diesel and petrol prices will rise accordingly. Connecting the German system to an EU-wide trade would level the playing field and shift responsibility away from national lawmakers.

“We want to tighten the carbon price path and move as quickly as possible to a European emissions trading scheme for mobility and heat,” says the manifesto. CDU and CSU do not name concrete prices for the coming years of national carbon pricing, as other parties have – providing leeway for future government coalition talks.

The CDU “still campaigns on the slogan ‘please do not name a price tag today’,” wrote Christian Stöcker in a column for Spiegel recently. While the German public increasingly puts climate action at the top of its policy priorities and remains strongly in support of the transition to a low-carbon and nuclear-free economy, this support shrinks once people are asked to change their behaviour or invest more of their income.

At a press conference, CDU head Laschet said the parties were “looking at the future of the 2020s” with their manifesto – a future where a European emissions trading market would decide the price, instead of “politics determining it down to the cent.”

How to guarantee social fairness of rising fuel prices is a key issue in the current election campaign in Germany, with some parties – such as the Greens – proposing to fully hand back carbon pricing revenues to citizens with a per capita payment. Conservatives instead aim to return the revenues to citizens and businesses by lowering the electricity price, for example through abolishing the renewables levy.

Platitudes on renewables, support of blue hydrogen as bridging technology

The chapter on Germany’s future energy system is marked by platitudes, calling for “a significantly faster expansion” of renewables as well as electricity grids, pushing storage technologies and securing affordability. The programme lacks concrete expansion targets for wind and solar power.

In a short chapter on hydrogen, the CDU and CSU say the fuel has an important role to play as versatile energy source, flexible storage and important raw material for chemical processes. While the parties aim to eventually produce “green hydrogen” with renewable electricity, it will “accept also blue hydrogen for a transition period”. So-called blue hydrogen is produced from fossil gas, where the CO2 is then captured and stored. The conservatives also say they want to expand gas grids in Germany more quickly and make it hydrogen-ready.

The conservatives emphasise the importance of Germany as an automotive industry location and say that there should be an openness towards all kinds of technologies.

“We reject a diesel driving ban as well as a general speed limit on the autobahn,” says the manifesto, and calls for Germany to remain the country which “produces the best cars in the world – with all types of drives.” Aside from e-mobility, synthetic fuels should be used in road transport, say the parties.

Such fuels also play a role in aviation, where alternative fuels should be exempt from the aviation fuel tax. “We also want to highlight the positive aspects of flying and the innovative strength of aviation again and promote it as a key technology in a targeted manner,” says the manifesto.

Germany as “anchor of stability” in the world

In accordance with Merkel-era policy, CDU and CSU say they aim to “take on more responsibility internationally” and make Germany an “anchor of stability” in the world. They see the U.S. as the most important partner globally, and call for a balanced approach towards China – confronting it with like-minded democracies where necessary, for example to protect intellectual property, high-tech and data, and striving for cooperation where possible.

CDU and CSU pursue the long-term goal of establishing a global emissions trading system, and aim to use trade policy as an instrument to introduce high standards and effective measures for global climate action. They also say that international greenhouse gas emissions reduction efforts must partly count towards national climate balances, and that the UN climate change conference COP26 in Glasgow should decide this. “Every saved tonne of CO2 counts – no matter where it is saved,” says the programme.

“139-pages long refusal to protect us from the climate crisis”

NGOs and activists criticised the election programme for its lack of ambition and detail. “This party programme is a 139-pages long refusal to protect us from the climate crisis and meet the 1.5 degree target,” Fridays for Future (FfF) activist Luisa Neubauer told Rheinische Post, accusing CDU and CSU of not acknowledging “the biggest crisis”. The FfF movement set up a website chiding the manifesto for failing to naming a CO2 emissions budget for Germany, pulling forward the coal exit date or introducing necessary sustainable agricultural policy.

Executive director of Greenpeace Germany Martin Kaiser said that those who had hoped for a renewal of the CDU/CSU's climate policy “will shake their heads at the election programme. With vague declarations of intent, the CDU and CSU will not meet the existential threat posed by the climate crisis and the extinction of species”, he wrote on Twitter.