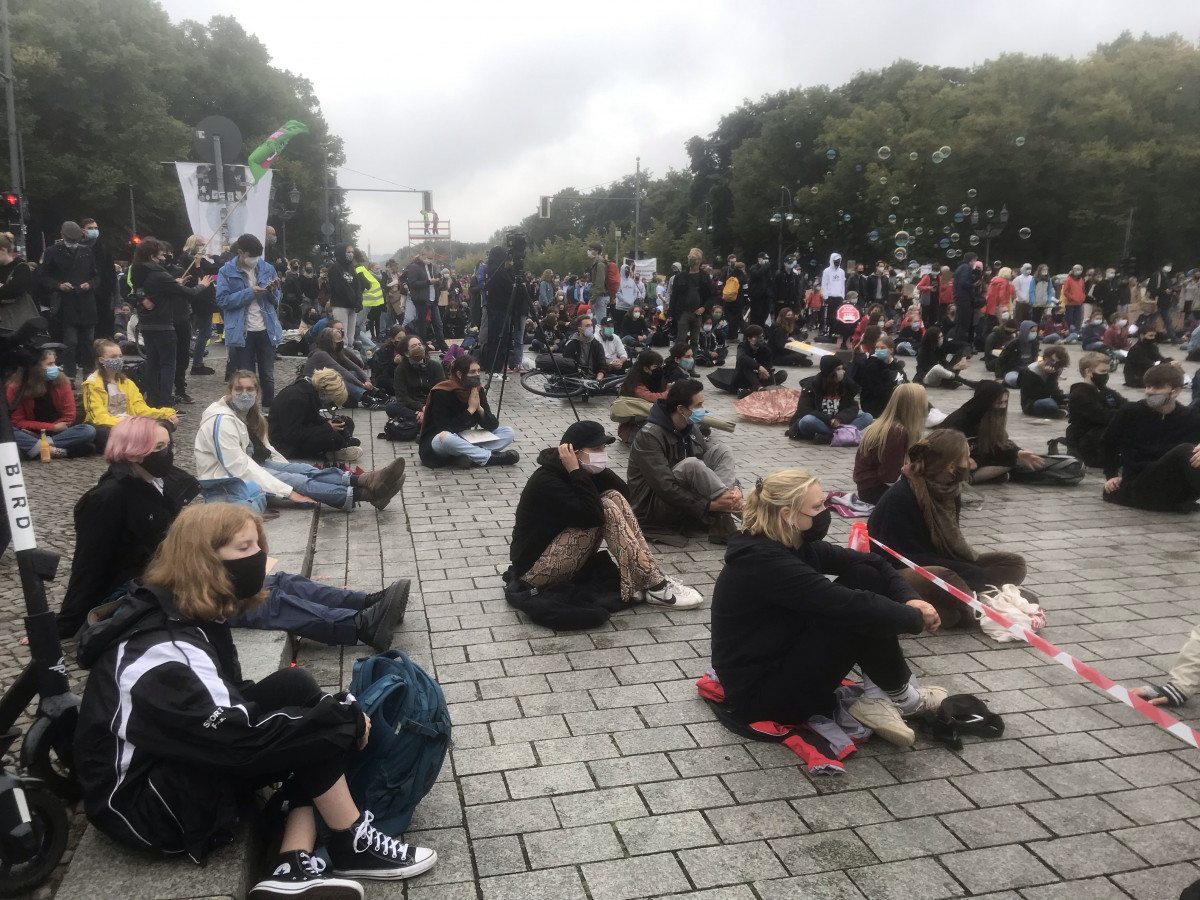 With numerous protests across Germany, the Fridays for Future youth movement has taken aim at pushing climate action to the very top of the political agenda in the run-up to the country's general elections next year. The activists don't want to side with any party and instead plan to put pressure on politicians across the spectrum to act according to the Paris Agreement, a spokesperson told Clean Energy Wire. But some of the movement's prominent members are running for a seat in parliament as members of the Green Party, leading to splits in the movement.

The movement has announced strikes in 35,000 locations around the world, with over 400 planned in Germany alone. In Germany's capital Berlin, the activists staged protests in three separate actions – a sit-in at the iconic Brandenburg Gate, a march, and a critical mass bike ride past parliament buildings.

Participant numbers at mid-day were lower than expected. According to police, initial estimates put the number of people in the city centre at around 2000, reported Berliner Morgenpost. These numbers are a far cry from one year ago, when a global climate strike had drawn almost 300,000 people in Berlin alone, according to organizers.

At Brandenburg Gate, people joined in with the sit-down protest wearing masks and observing social distancing rules. They chanted 'Power to the people, cos the people got the power!' and 'We are here! We are loud!'"

20-year-old Hanna and her friend Stine, 21, say they were regular attendees at previous strikes. “I think it’s great that they kept the movement going [throughout lockdown], I think they’ve done really well,” said Hanna. Both say they hope politicians will propose more radical climate policies in the run-up to the election. “At the moment it just seems like it’s all talk,” she adds. The atmosphere at the Berlin protest appeared slightly subdued, as it coincided with heavy rains.

Actions have been designed to adhere to social distancing guidelines – a strategy organisers say is important, given the movement's calls for following scientific guidelines. Fridays for Future Berlin spokesperson Quang Anh Paasch adds that a sit-down protest is planned to ensure safe distances between participants.

The current economy minister Peter Altmaier, a member of Chancellor Angela Merkel's CDU who earlier this month called for a "historic" consensus on climate change, said that he “welcomed” the protests in an interview with public broadcaster Dlf. "Global warming doesn't take a break," he said in a message on Twitter, adding that "we can and must become better – a climate neutral, economically powerful and social Europe must be the target across parties." But Jochen Flasbarth, a social democrat and state secretary in the environment ministry, said that "climate protection is a central task of our time. It cannot be solved by abstract pacts in a last-minute panic before elections." 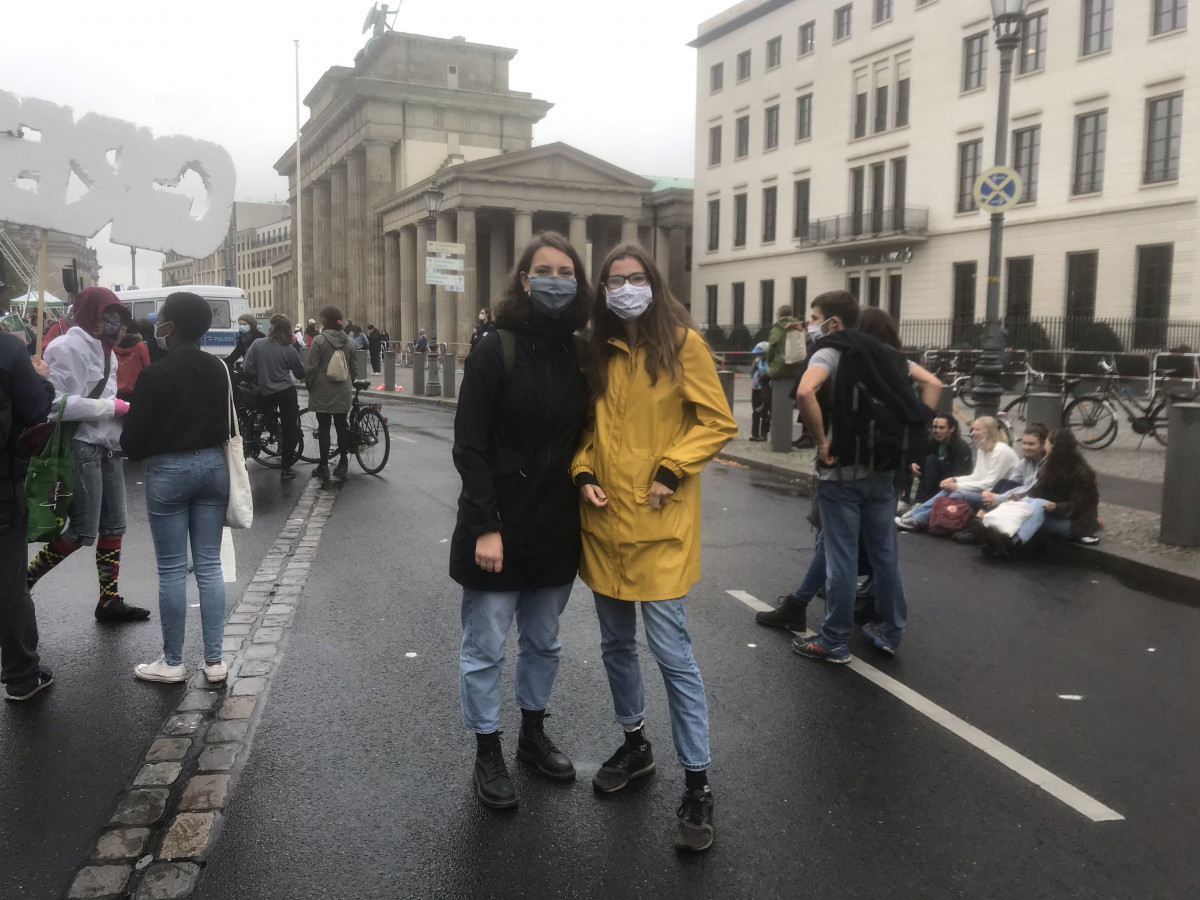 20-year-old Hanna and her friend Stine, 21, say they have been regular attendees at the climate strikes. Photo: Jessica Bateman.

Preparing for a watershed moment

Next year’s elections mark a watershed moment in German politics. Chancellor Angela Merkel, whose approval ratings have soared to over 70 percent during the pandemic, will be stepping down, and it is not yet clear who her successor will be. The current ruling Christian Democrats (CDU) and Social Democrats (SPD) have made it clear they are unwilling to continue their coalition.

Paasch says Fridays for Future doesn’t intend to side with any party, and will instead be calling on the CDU, SPD, the Greens, the Left and the economic liberal Free Democrats (FDP) to create policy proposals in line with the 2015 Paris Agreement.

The activists claim that “not even the Green Party” is conforming to the targets laid out in the Paris Agreement. However, some members of Friday for Future are also Green Party members, which has led to splits in the movement. Some prominent members, such as Jakob Blasel, a spokesperson for the organisation, are even running for a seat in Germany’s parliament.

A recent survey found more than 90 percent of Germans say climate change has remained just as or even more important to them since the start of the pandemic, meaning it is likely to be a key issue shaping election policy. The Green Party, which is currently polling at 19 percent, is likely to benefit from this, and polls show the distinct possibility of a CDU-Green coalition. As well as Altmaier’s call for consensus, which is seen by many as an olive branch from the CDU politician to the Greens, the current coalition has recently announced a major climate policy package. This includes the coal exit, a CO2 price for transport and heating fuels, and a national climate law.

Although this all may sound like good news from the activists’ point of view, Fridays for Future says it still wants political parties to adopt much stronger stances. Paasch says he believes politicians need to give the same energy to the climate crisis as they have the coronavirus pandemic. “The [current government] doesn’t really seem to take the science on climate change as seriously as it does with the coronavirus and biology, which is interesting and bizarre to us at the same time,” he says. He gives the example of French President Emmanuel Macron’s insistence that Air France must cut its emissions in order to receive state financial support as the type of action the movement would like to see in Germany. "We didn’t see anything like that, in Germany they just gave the money away with no environmental conditions. Most politicians seem to think the climate crisis is something to deal with later on in the future, and I think that’s very dangerous. When we are spending money and making changes, we need to think of the different crises all together.”

Germany is currently on track to meet its original target of reducing greenhouse gas emissions by 40 percent between 1990 and 2020, but this is in part due to the reduction in energy demand caused by the lockdown. Activists fear that emissions could jump up once the pandemic is over, unless action is taken now.

No strategy yet for election count-down

When the lockdown was first announced in March, Fridays for Future cancelled all its in-person actions and moved its activism online, which Paasch admits was “kind of hard” for a street-based movement. Digital activism didn’t engage people as much as the protests had – one survey found that only six percent of teenagers had taken part in an online strike, compared to nearly a third who had been to a physical Fridays for Future action. "It was very challenging dealing with school, university and with our mental health," he continues. "But I would say that now there are less restrictions people are coming back, and new people are coming to us. It’s getting better."

The ongoing pandemic and its potential for fast-changing restrictions also means it is difficult for the movement to plan far ahead, and it does not yet have a strategy for how it will approach the election count-down. “We can only plan a month in advance as it’s kind of hard right now,” Paasch says. “We will see how this strike goes – maybe it will be a disaster and we will have to go back online, or maybe we can stay on the streets.”