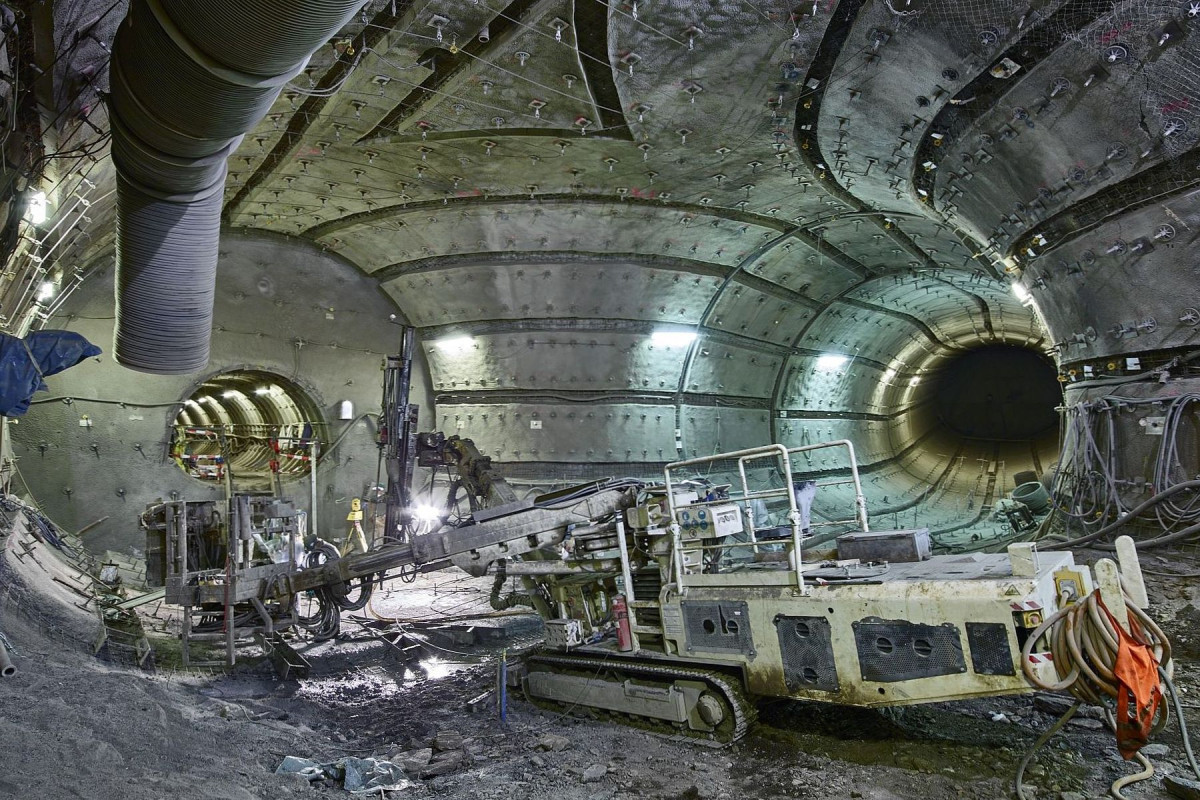 The final repository for low and medium-level radioactive waste “Konrad” in Lower Saxony (picture) is under construction but the search for a place to store the most dangerous nuclear waste has only just begun. Photo: BGE.

Germany has made the first step in finding a final resting place for its nuclear waste in what will be an intricate, drawn-out process over the coming decade. An initial report by the Federal Company for Radioactive Waste Disposal indicates where a permanent repository for high-level radioactive waste could be located. With its publication, some regions will sigh a breath of relief because they have been exempt from the process according to geological criteria, but locations in 54 percent of Germany remain in the running as the potentially safest place for the country’s nuclear waste.

More than half of Germany is made of bedrock formations that would be suitable to house an underground disposal site for nuclear waste, the Federal Company for Radioactive Waste Disposal (BGE) has found.

Following an intricate process that is to ensure maximum transparency and public acceptance, the BGE today published an initial report indicating that 90 areas, stretching over 54 percent of Germany, are possible locations for a radioactive waste repository that is to last for 1 million years, according to geological data. “With its geological conditions, Germany is very well suited for finding a site to store highly radioactive waste,” BGE CEO Stefan Studt said at a press conference.

The nation’s 27,000 cubic metres of nuclear waste – accumulated after producing electricity in nuclear reactors over 62 years – could find its final resting place in 15 out of the 16 German states. The only large connected areas that have now been excluded from the process are located in the very west and the very south of the country.

“Three years after the start of the procedure, we have achieved the first widely visible progress in the search for a final repository,” federal environment minister Svenja Schulze said in a press release, adding that she expected all politicians to give the process their backing. “The process is good. It deserves trust.”

However, NGO’s following the process are not as convinced. Antje von Broock from BUND (Friends of the Earth Germany) said at their own press conference: “This report has been written behind closed doors for three years. We have not been allowed to see parts of it so that we could start our evaluation.” She said that the citizen participation process (so called sub-area conferences from October 2020 till June 2021) was too short.

Jochen Stay, spokesperson of anti-nuclear NGO ausgestrahlt said he feared that this process just like previous ones would result in pure conflict. “One location in Germany is to carry the burden of the entire nation’s nuclear waste. Today, more than half of all wind parks fail because of citizen protests and here we are talking about highly radioactive waste.” He criticised that the data that the BGE used and produced was mostly not public. 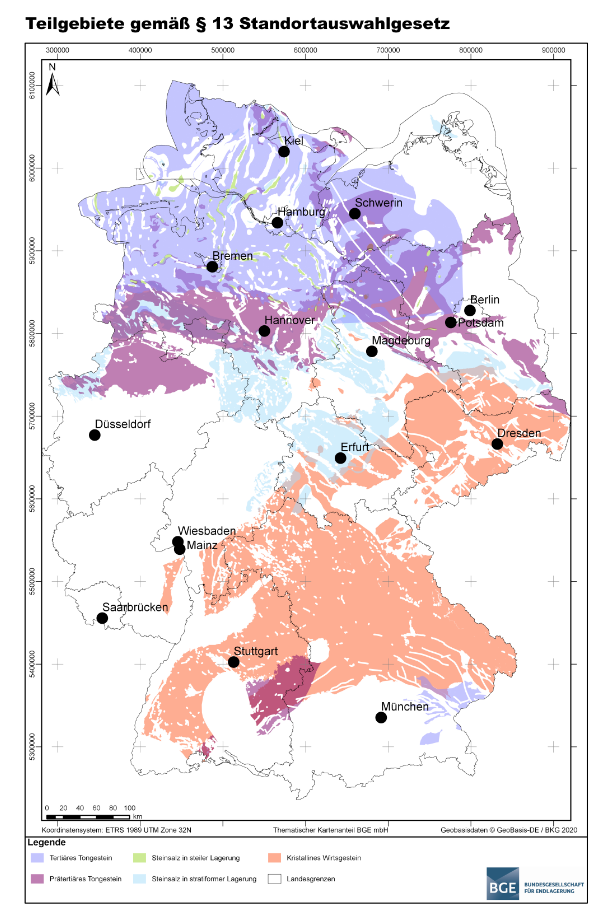 Over half of Germany is considered suitable for building an underground permanent disposal mine for high-level nuclear waste, according to the first report of the BGE. Map: BGE.

The BGE followed a procedure prescribed by law that is designed to prevent any premature or prejudiced decision making in this highly sensitive area, since no German state or region is particularly keen on having the radioactive waste buried on its land. Starting from a blank map, the BGE had to use certain exclusionary criteria (e.g. volcanic activity, earthquakes) as well as minimum requirements (host rock must be clay rock, rock salt or crystalline rock) to arrive at the areas that remain in the running after the exclusion process. Initial research was conducted entirely based on geological data, so other criteria such as settlements or cultural sites, flood plains or protected areas were not incorporated in the 444-pages report (English summary here). They will be included in the following stages.

Jochen Stay from ausgestrahlt criticised that the BGE was going to be its own judge in the further citizen participation process.  “If there is criticism on the BGE’s report from the citizen conference, the BGE gets to decide itself, if it finds this criticism valid and may simply reject it if it doesn’t”, he said. 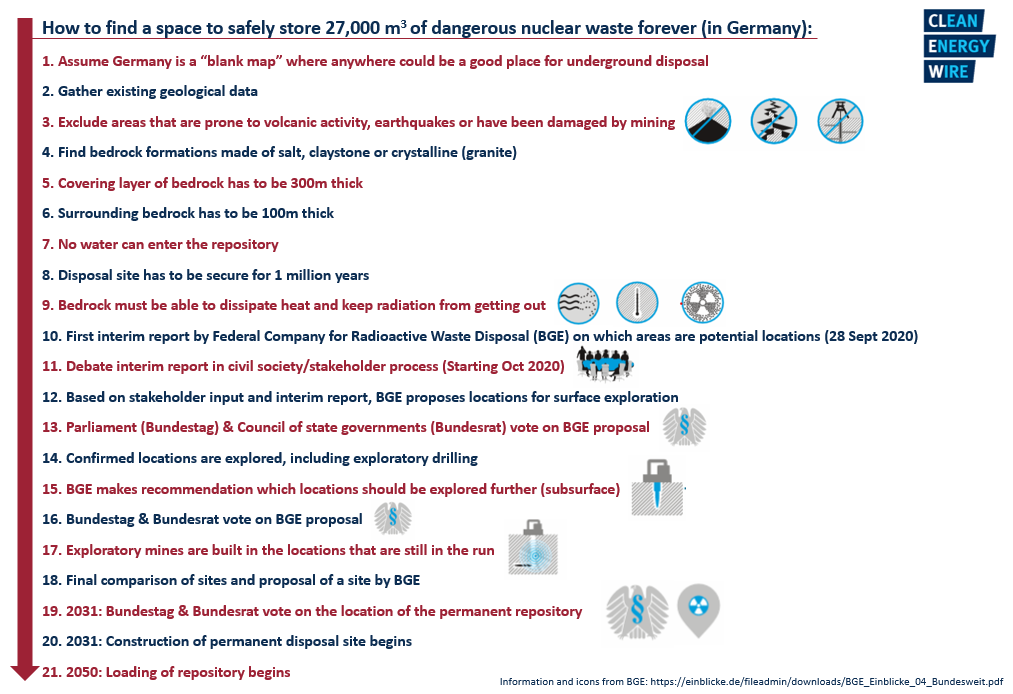 The necessary rock formations, including rock salt, crystalline rock (granite), clay rock, that also fulfil other geological requirements, such as having a 300-metre thick layer of rock between the surface and the storage area, exist in large parts of northern, eastern, central and southern Germany, including areas located beneath the North Sea. A total of nine areas are located in clay rock formations, 74 in salt formations and seven in crystalline (granite) bedrock, but their sizes vary between less than 50 square kilometres and areas stretching over almost entire states.

“We have found out where we can expect to find favourable geological conditions that make it worthwhile to take a closer look,” said Steffen Kanitz, who is in charge of site selection at the BGE. “But the sub areas we have identified in the report are by no means waste disposal sites yet,” he added.

Although all 16 states agreed to the search process, the Bavarian government in particular has caused unrest by stating in its coalition treaty that it “was convinced that Bavaria is not a suitable place for a final nuclear repository”. Shortly before the publication of the BGE report, Bavarian environment minister Thorsten Glauber challenged the whole process by suggesting that a previously explored storage site at Gorleben (see below) should be looked at more closely than other suitable places. According to the BGE report, large parts of Bavaria have suitable formations of crystalline (granite) or clay rock.

Both Kanitz and Studt of the BGE stressed that their work had been independent and that state and regional governments had delivered the necessary data and had otherwise not tried to interfere in the process. But Studt also warned: “It is the responsibility of politicians to back the legislation that they have agreed to and to not make remarks that damage the trust of the population in the procedure.”

Federal environment minister Svenja Schulze reiterated his point in her press release, saying: “For me, the central point is that political motives must not be allowed to influence the search for a permanent repository in any way, and a strictly scientific approach must be followed. Only then can a repository site in the end be accepted - regardless of where it will be located in the country.”

By the time Germany shuts down its last nuclear reactor, the plants will have produced 1,900 large containers (around 27,000 cubic metres) of high-level (heat generating) radioactive waste. The decision to phase-out nuclear energy by 2022 and thereby also limiting the overall amount of waste, continues to enjoy overall support. It is not challenged by the majority of parliamentarians in the Bundestag or the government, despite some voices calling for expanding the run-time of the existing plants, either for climate action reasons or because they see supply security in the south of Germany potentially threatened when the last reactors are shut-down. In the first half of 2020 a share of 11.3 percent of electricity generated in Germany came from nuclear power plants. 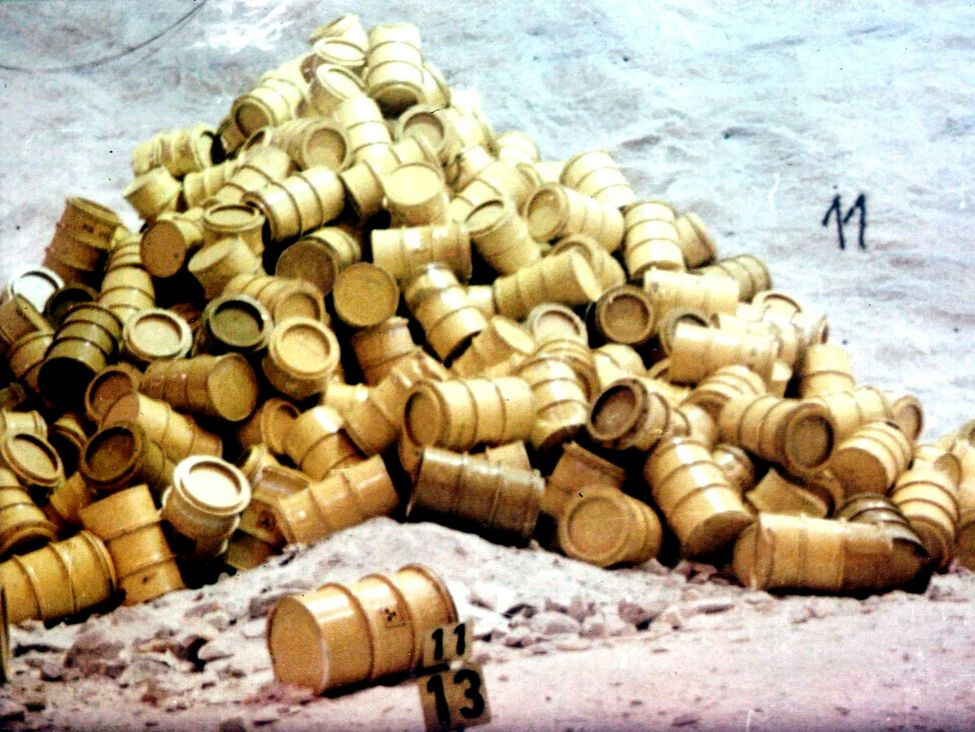 What to avoid: The failed storage of nuclear waste in the disposal mine at Asse is one of the reasons why the search process for the permanent repository for high-level nuclear waste is such an intricate process. Photo: BGE.

Finding a permanent waste storage place is a “nuclear” subject

Regardless of Germany’s decision to stop using nuclear power, searching for a waste storage location is a contentious subject. Only Finland has so far succeeded in finding a final resting place for its nuclear waste (in granite), with France attempting to have one operational in 2035 (in clay rock). If all goes to plan in Germany, the site will be decided on in 2031 so that construction of the underground repository can begin and completed by 2050. Until then, the high-level radioactive waste will remain in temporary storage facilities at the nuclear power stations.

Previous attempts of storing low and medium-level nuclear waste have drawn large criticism and public discontent due to poor planning and execution. An exploration for a high-level waste repository in Gorleben, Lower Saxony, has been fraught with administrative flaws and opaque  planning. To win back trust, the government in 2013 introduced the “Law for finding and choosing a nuclear waste repository”, followed by an expert commission which in 2016 delivered a plan on how the search for a repository should be conducted. One of the main and most important aspects of the plan: Germany must be a blank map, i.e., every region could potentially be suitable for a storage facility, ensuring that no communities or states were pre-selected. The salt mine of Gorleben did not meet the criteria of the BGE’s search and has now been excluded from the process.

The long process ahead – loading the repository should start in 2050

With the BGE’s report, the map is no longer blank. But the following 10-year procedure, including stakeholder conferences and citizen input, combined with the federal parliament (Bundestag) and states’ representatives (Bundesrat) having to vote on several decisions along the way, is expected to ensure a maximum of citizen support for whatever location the process will find in the end.

Today’s report will be put through a mill of citizen and stakeholder scrutiny at several so-called “sub-area conferences” starting in October 2020. This input will then become part of the next report, which will be followed by the BGE proposing remaining regions for further exploration.

For more information on the process of finding a nuclear repository see this Factsheet.