The lobbying scandal engulfing Angela Merkel's Conservatives has derailed important talks about Germany's plans for rolling out renewables. The affair also dampens the Conservatives' hopes of an unchallenged victory in September's general elections.

Germany's Social Democrats (SPD) have put key talks about the expansion of renewable energies on hold because of lobbying allegations against yet another parliamentarian of chancellor Angela Merkel's conservative bloc. The parties, which govern the country in a "grand coalition", were meant to discuss the 2021 reform of the Renewable Energy Act, which includes major unresolved issues such as new targets for the roll-out of renewable energies, which are fundamental for Germany's landmark energy transition.

The SPD canceled a meeting this week after news outlet Die Zeit reported that Joachim Pfeiffer, the CDU/CSU spokesperson on energy policy and one of the bloc's original three negotiators, runs two consulting firms whose business dealings could represent a conflict of interest. Pfeiffer strongly denied any wrongdoing.

The CSU's energy politician Georg Nüßlein, who was also a negotiator in renewables talks, resigned earlier this month from his party after being accused of receiving kickbacks for brokering mask deals in the early stages of the pandemic. This week, public broadcaster WDR also alleged Nüßlein had personally profited from changes to the renewables law he helped negotiate in December. Nüßlein also denies the allegations, and his lawyer told WDR he could not comment.

"We want to exclude from the outset that we negotiate a law together with a member of parliament who possibly pursues a self-interest," Bernd Westphal, energy policy spokesman of the SPD parliamentary group, told Tagesspiegel Background. The SPD says it will not resume negotiations until there is certainty that CDU negotiators do not personally benefit from the reform.

SPD and CDU agreed late last year to complete the reform in the first quarter, which only leaves two weeks. The SPD's Westphal said he was confident the talks could be concluded by Easter.

Germany’s renewables legislation was launched 20 years ago and is the basis for the significant growth in onshore wind, solar PV and biogas by establishing grid priority for these power sources and guaranteeing them generous feed-in tariffs. The latest reform of the EEG, which specifies a timeline of tenders for renewable power installation additions until 2028, came into effect on 1 January 2021.

The lobbying affair comes at an awkward moment for the Conservatives given the country faces a general election in September. Merkel's bloc has already lost four lawmakers over the scandal.

Merkel is not running for chancellor in the election and her bloc is yet to name a candidate to succeed her in the chancellery. Bavarian CSU state premier Markus Söder is currently the public favourite to follow Merkel. But it is still uncertain whether he will run as candidate for the conservative alliance, as Armin Laschet, the new leader of the much bigger CDU, which operates in every state except Bavaria, might claim the candidacy for himself. The scandal puts both of them under pressure as it involves both their parties.

The conservatives were dealt historic losses in regional elections on Sunday over voter anger at the scandal and frustration over Germany’s slow progress with coronavirus vaccines.

In recent voting intention polls, the conservatives suffered significant losses. For the rivalling Green Party and the Social Democrats (SPD), the scandal has brought fresh hope that the conservatives' sway might fade away. An internal paper of the opposition business-friendly Free Democrats (FDP) stated this week the scandal meant the Conservatives could face a "political explosion," according to media reports. 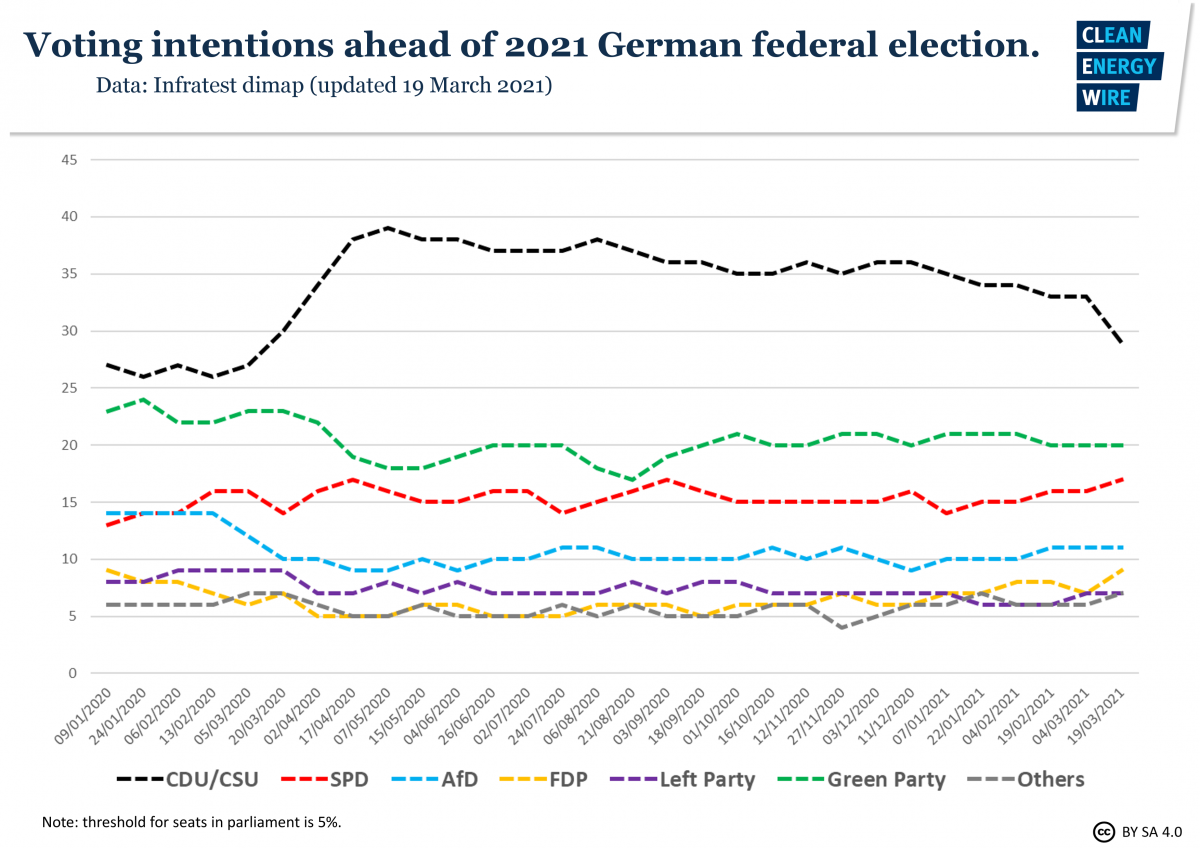