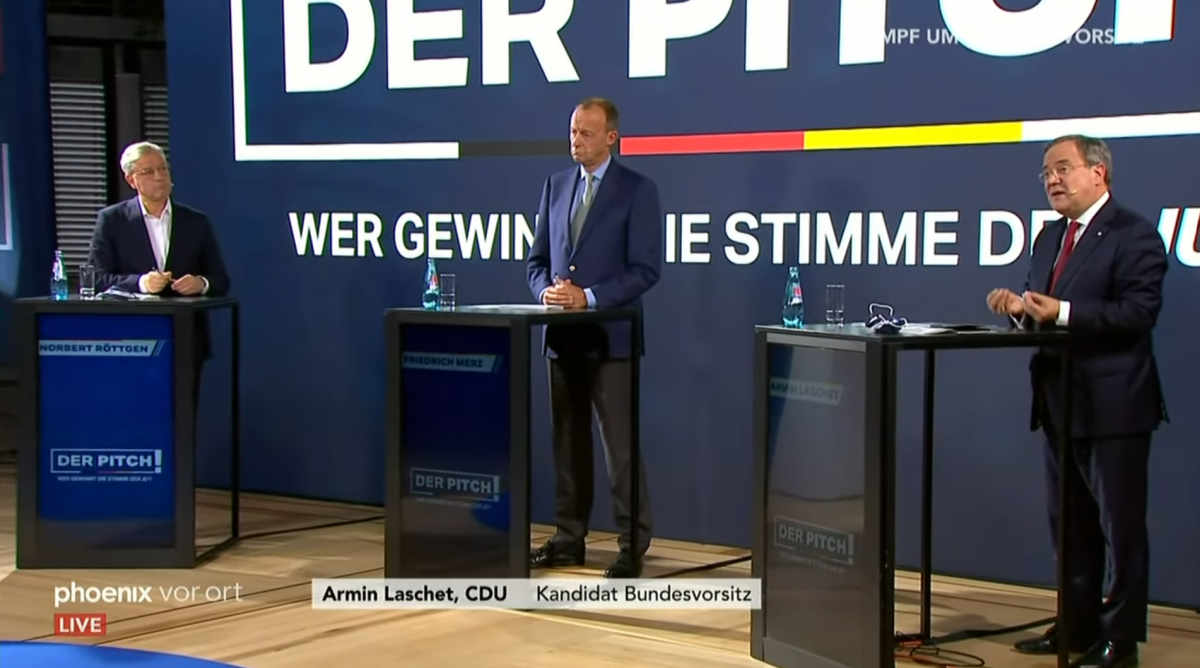 The three candidates for future leadership of Germany’s conservative Christian Democratic Union (CDU) – party of Chancellor Angela Merkel, have all called for rigorous efforts to protect the climate at a debate organised by the party’s youth, the Junge Union. Armin Laschet, Friedrich Merz and Norbert Röttgen, gave a "pitch" to the party youth to help CDU delegates pick their favourite candidate at a party conference in December. The future leader of the party has a good chance of also becoming chancellor candidate in the 2021 federal election campaign.

The three candidates for leadership of Germany's largest party, the conservative Christian Democratic Union (CDU) of Chancellor Angela Merkel, have all signalled that they consider climate action and sustainability to be defining political challenges for the country in the next decade. At a debate event organised by the CDU's youth organisation Junge Union, the three candidates Armin Laschet, Friedrich Merz and Norbert Röttgen, gave a "pitch" to the party youth to help CDU delegates pick their favourite candidate. Whoever is chosen at a CDU party conference in December will replace the current leader defence minister Annegret Kramp-Karrenbauer, who announced in February that she will step down after only about one year in office.

The era of Chancellor Angela Merkel will come to an end when Germans head to the polls next autumn, and parties are gearing up for the campaign. Since the previous election in 2017, climate and energy have consistently moved up among voter priorities. A string of hot, dry summers that took a toll on the country's environment have contributed to massive climate protests led by the Fridays for Future movement, which put emissions-reduction efforts at the heart of public debate.

Friedrich Merz, the CDU conservative wing's favourite who led the party's parliamentary group until 2002 and served as chairman of asset management company BlackRock Germany for four years, surprised some observers by stressing the need for climate action in his opening remarks. "I stand for an ecologic renewal of the social market economy," the candidate, who is perceived as an advocate of Germany's traditional industries, said. Merz told the CDU youth that he would ensure that the party will "no longer adopt laws that shift today's burden into the future and leave it to the young generation”. In what could be seen as a nod towards those that are sceptical of the German government's current focus on electric cars and other fixed energy transition pathways, he stressed that the "great ecologic challenges of our time can only be solved with the most modern technology – and not without it”, suggesting that no technology's emissions reduction potential should be ignored.

Armin Laschet, a centrist and current state premier of the country's most populous federal state, North Rhine-Westphalia (NRW), pointed out that his state government already oversaw NRW's coal phase-out plan. He called for easing regulation on environmentally-friendly projects, such as railroad construction, and stressed that successful emissions reduction can only work with a functioning economy. "We currently only achieve our climate targets because the economy has been throttled down. But we have to also achieve them with a strong economy."

The third candidate, Norbert Röttgen, who acted as federal environment minister until 2012 before being dismissed by Merkel and who has since acted as head of the parliament's foreign affairs committee, is seen as the three candidates' greatest outsider. He too cautioned that climate change will define the political landscape for the foreseeable future, arguing that "we have to show others like China, India and emerging countries that we can manage to combine climate action with economic success”,  for which he regarded emissions trading as the most important tool. "We're at the beginning of the 2020s, during which only one thing will be certain: there's going to be more dramatic changes," Röttgen said.

The CDU plans to elect a new leader at a party convention on 4 December, a schedule that could still be thwarted by measures to contain the coronavirus pandemic and make an in-person meeting of hundreds of party delegates impractical. The CDU and its Bavarian sister party CSU have cemented their lead as the country's strongest party during the pandemic, making it likely that the conservative bloc will also have a good chance to provide the next chancellor. However, the CDU's three hopefuls could see possible ambitions to also become chancellor candidate after taking lead of the party frustrated by CSU head Markus Söder. The current state premier of Bavaria has repeatedly come out as the most popular conservative politician in recent polls and could become the CDU/CSU alliance's joint candidate for chancellor if the CDU's leadership expects him to do better at the election in autumn 2021 than its own leader.