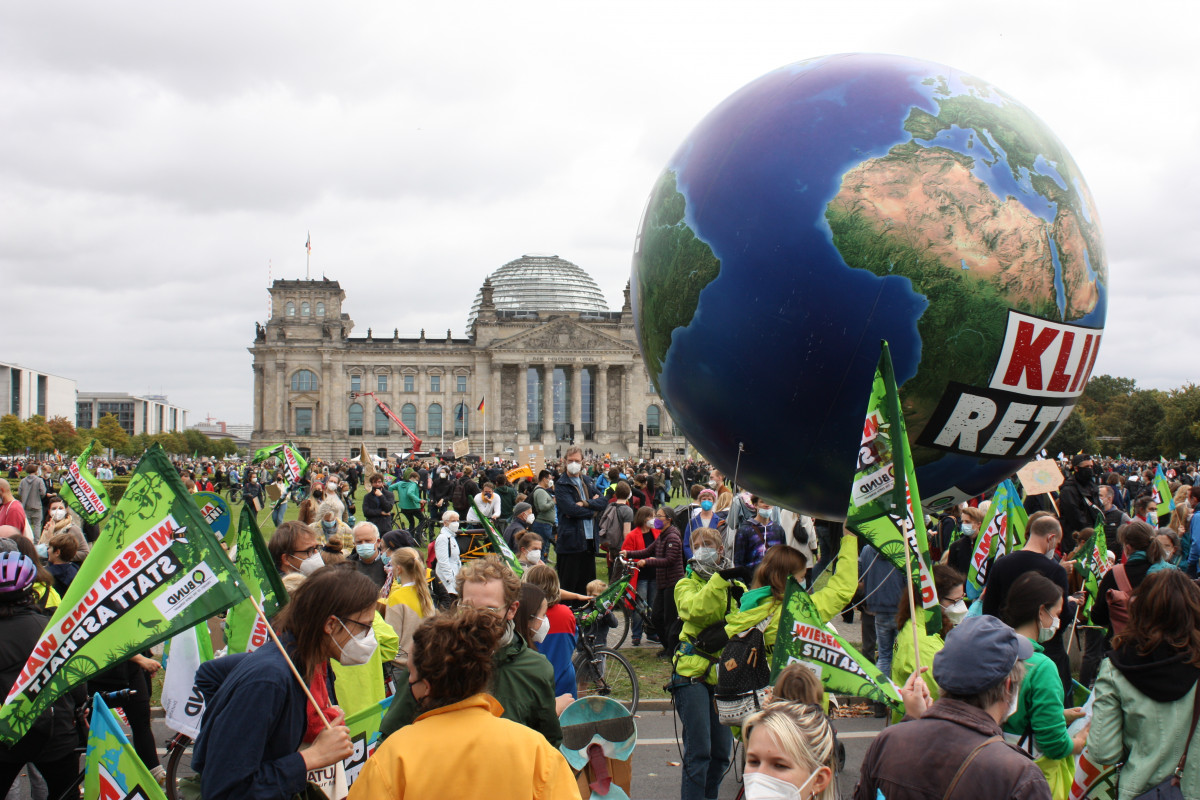 Fridays for Future protesters gather in front of the German parliament to call for 1.5C-conform climate policy. Photo: CLEW/Wettengel.

Youth climate movement Fridays for Future called for a rapid transition to climate neutrality at its eighth global climate strike just two days before the German federal election. Protests took place in hundreds of German towns and cities, with participants demanding all parties pursue socially just climate policies in line with the target of limiting global warming to 1.5°C. Swedish activist Greta Thunberg, who started the climate strikes in 2018, joined the demonstration in Berlin, where thousands of protesters assembled in front of the national parliament.

Youth climate activists from the Fridays for Future (FfF) movement took to the streets across the world on Friday 24 September for its eight global climate strike. In Germany, where the group was planning protests in over 470 locations across the country just two days before the federal election on 26 September, the focus was on pushing parties to commit to a rapid transition to climate neutrality.

“We are here to affect change in politics, to make sure that measures are finally put in place to reach the 1.5-degree goal,” the 18-year-old Clara, joined by her friends Emiel (13) and Vanessa (17), told Clean Energy Wire during the protest in Berlin. Thousands of protesters had gathered right in front of the Bundestag, Germany's federal parliamentary building, holding up signs saying "burn capitalism, not the planet", "raise your voice, not the sea level," and "listen to the scientists". According to the police, over 20,000 people registered to join the protest in the capital, writes newspaper Berliner Morgenpost. A first-time voter, Clara is disappointed about the party programmes at hand. Even though most parties call for 1.5-degree conform climate action, they do not take the necessary measures to achieve this, she explained. Nevertheless, she finds it important to use the opportunity to vote and plans to cast a ballot for the Greens this Sunday.

"The last few months have shown how dishonestly the parties are campaigning on the climate crisis without even beginning to advocate sufficient measures to combat it,” said spokesperson Maia Stimming in a press release. “Without massive pressure from us on the streets, no coalition will stick to the 1.5°C limit after the election.” In order to limit global warming to 1.5°C, the lower boundary defined in the Paris Agreement in 2015, Fridays for Future calls on Germany to reach climate neutrality by 2035, ten years earlier than currently planned, and phase out coal-fired power production by 2030 instead of 2038. 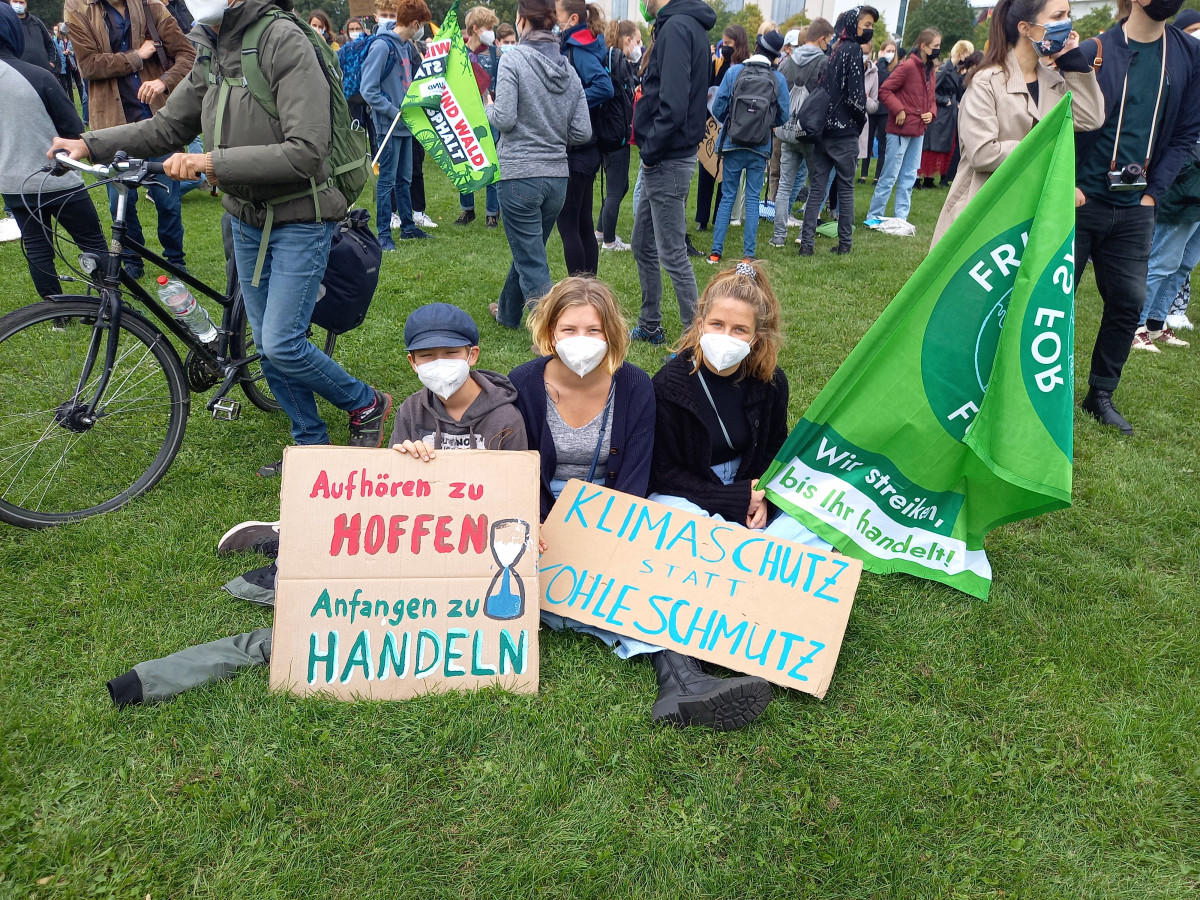 "In ten years, it will be too late"

Three 12-year-old friends Milo, Merlin and Florian have also come to call for more climate action. “If we start [with climate action measures] in ten years, it will be too late,” Merlin said. Too young to vote themselves, they have talked with their parents about which parties have the best climate programme: “For climate protection I think the Greens and the SPD are good choices.”

“Vote for the climate, because we cannot do it,” reads the cardboard sign that Nora, 15 years old, brought to the demonstration. She feels scared about climate change, the teenager told Clean Energy Wire. “Most of all I feel powerless. As a minor, there is not much you can do.” This is why she has urged people, including her parents, to vote for the Green Party. They are far from perfect, she said, but “it’s a good start.” A recent global survey shows that young people across the world experience feelings of anxiety in response to the climate crisis and government inaction on the issue.

Chancellor candidate Olaf Scholz (SPD) expressed his support for the climate strike on Twitter, saying he is grateful for Fridays for Future's commitment to the climate. "They have helped put climate protection at the top of the agenda," he wrote, adding: "Climate policy is one of the important issues to be decided in this election!". To this, Fridays for Future Germany replied: "We don't want to destroy the good mood - but we are striking YOUR government today, Olaf."

Meanwhile, Green Party chancellor candidate Annalena Baerbock joined the Fridays for Future demonstration in Cologne. "The election on Sunday is a climate election," she wrote on Twitter, adding that the protesters are making it clear that "they want a new beginning because they know that the future of all of us is at stake." Chancellor candidate for the CDU/CSU union Armin Laschet promised more speed in climate action in view of the protests. "The goal is to achieve climate neutrality worldwide as quickly as possible," he wrote on Instagram. "We in Germany have to show that we are the fastest, that we are the best, that we have the best technologies to convert our entire economy to climate neutrality."

In Berlin, activists were joined by Greta Thunberg, who started the climate strikes in Sweden in 2018 and has inspired young people across the globe to do the same. More than 20,000 participants have registered for the demonstration in front of the German Bundestag, according to police estimates, “There is a lot at stake in Germany,” Thunberg told newspaper Der Tagesspiegel in a joint interview with German FfF leader Luisa Neubauer. “Remember, Germany is historically the country with the fourth highest CO2 emissions, virtually one of the biggest climate sinners in history,” the 18-year-old added. The two activists accuse Germany’s political parties of collective failure in the fight against climate change. “Not once has chancellor Merkel gone out on a limb for climate change", Neubauer said, criticizing the chancellor who is leaving politics after 16 years of leadership. 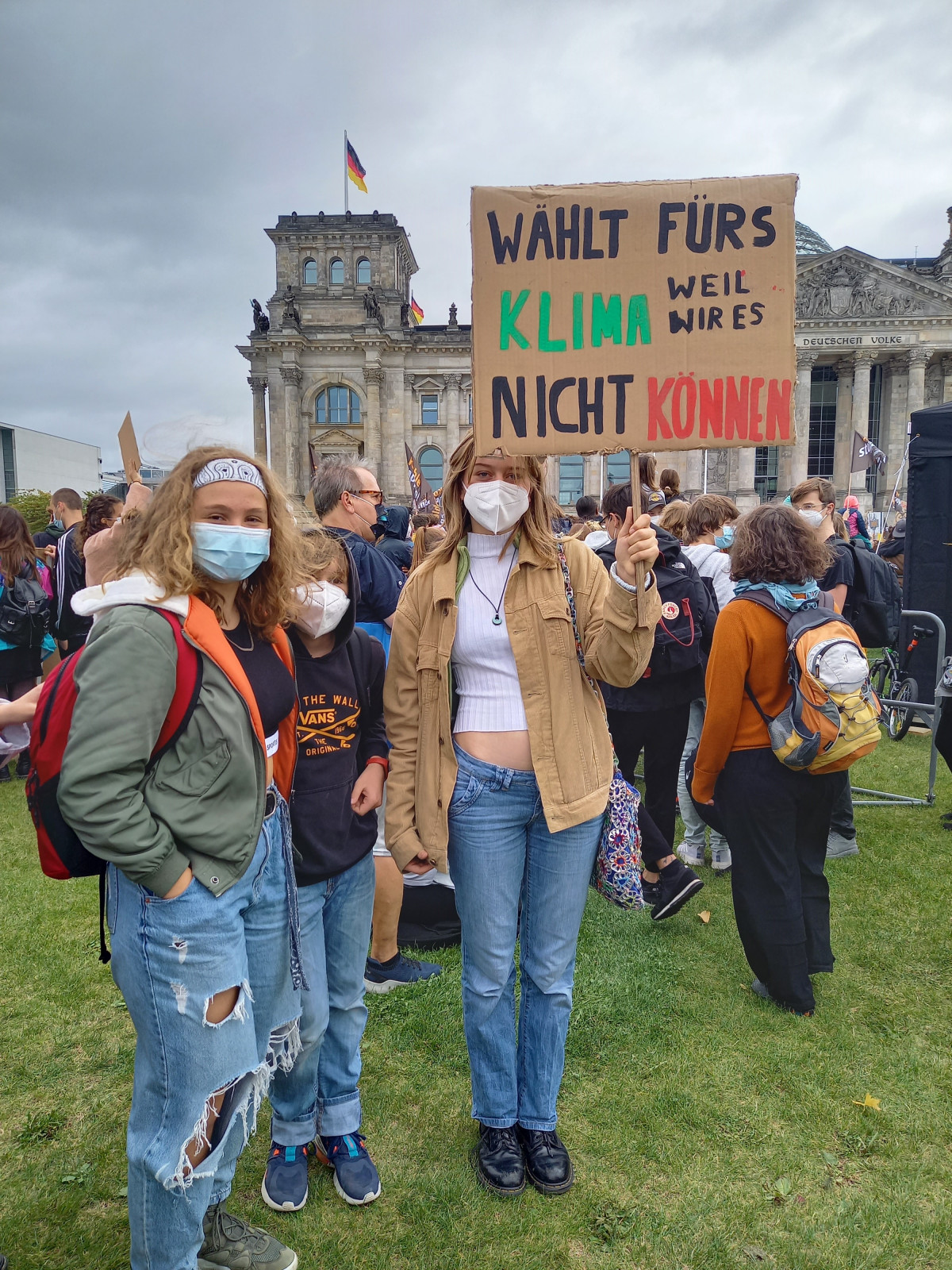 "I feel powerless. As a minor, there is not much you can do," 15-year-old Nora tells Clean Energy Wire. Photo: CLEW/Nijhuis.

Never before has climate policy played as large a role in a German election campaign as it does in 2021. Germany’s largest parties, with the exception of the climate change-denying AfD, say they commit to the goals of the Paris Agreement and have presented plans to accelerate the transition to clean energy. Climate change is also one of the top three concerns for German voters, along with issues of social inequality and the coronavirus pandemic, recent surveys have shown.

Fridays for Future’s Neubauer attributes this at least in part to the influence of the climate movement, which mobilized masses of young people to the streets in 2018 and 2019. “Most of the parties that are now advertising climate protection on their election posters would not have done so two years ago. So we see where we as a climate movement have taken politics,” the 25-year-old student told Der Tagesspiegel. “In the next four years, we will do everything in our power to make them stand by the promises they are now making so loosely.”

The Fridays for Future movement has become an indispensable part of the public debate on climate change in Germany since the school strikes for climate started three years ago. In a recent court case started by activists, Germany’s highest court ruled that the government’s climate legislation was insufficient and violated the freedoms of younger people by offloading major emission reduction burdens onto future generations. The decision resulted in higher national climate targets a few weeks later.

On 26 September, German voters will head to the polls to elect a new national government and determine a successor to outgoing chancellor Angela Merkel, who has been at the helm of Europe’s biggest economy for the last 16 years. In what is deemed the most unpredictable election in the country’s post-war history, current polls indicate a tight race between the social democrats (SPD), with around 25 percent of the vote, and the conservative union (CDU/CSU), who poll at around 21 percent. Trailing behind are the Greens (16%), the Free Democrats (11%) and the far-right AfD (11%).