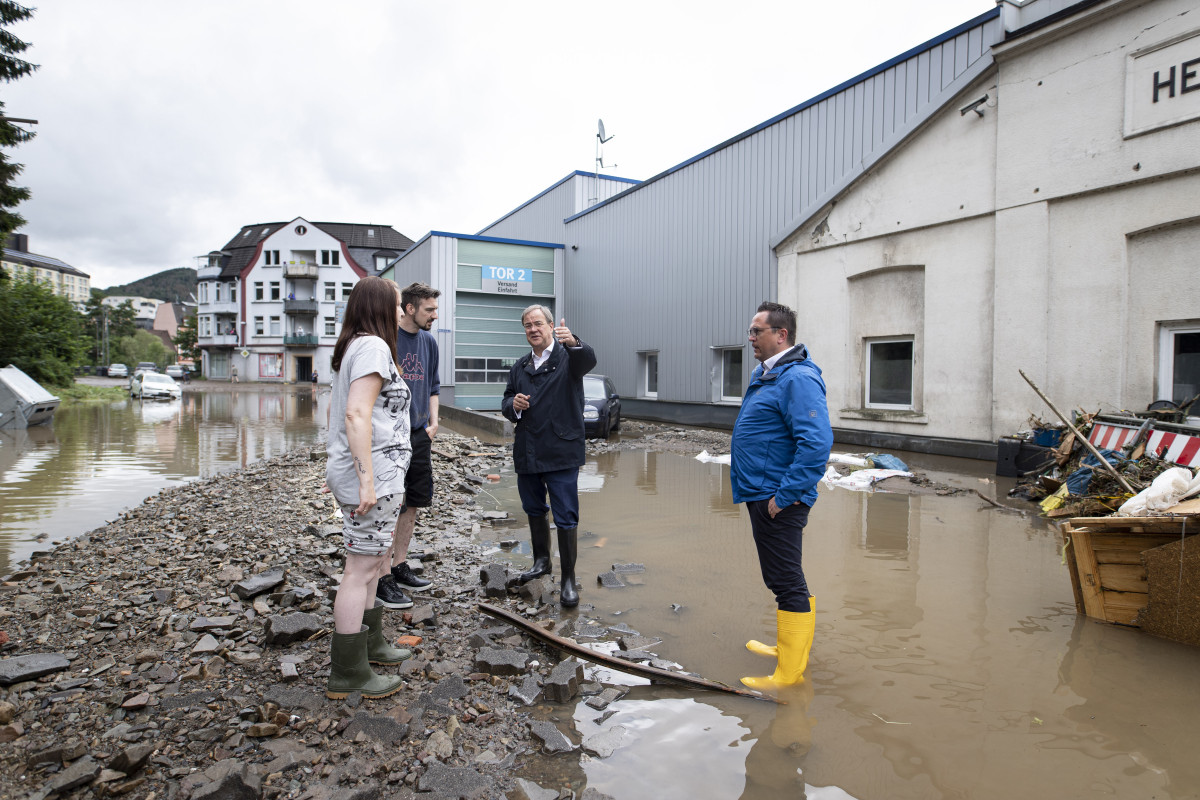 Conservative chancellor candidate Armin Laschet (in the middle with black boots) called for stepping up efforts to combat climate change during a visit to the affected region, where he is state premier. Photo: Land NRW / Ralph Sondermann.

Catastrophic floods have killed more than 130 people in Germany in one of the worst natural disasters in the country's post-war history. The torrential rains have been widely linked to climate change, swinging the issue into focus ahead of Germany’s election campaign. Both Conservative chancellor candidate Armin Laschet and Social Democrat rival Olaf Scholz visited regions that were heavily affected. Like many other politicians, scientists and media reports, they drew a connection to rising temperatures. [UPDATES with latest death toll]

Extreme floods in western Germany have killed more than 130 people, with many more still missing. The deluge followed on intense rains in the country's west and also heavily affected parts of the neighbouring Netherlands and Belgium. The disaster has pushed the issue of climate change further into the centre of the country's election campaign, while cientists sounded a clear warning that the intensity and frequency of such extreme weather events increases due to global warming. Extreme rains caused otherwise sluggishly flowing rivers to overflow in some regions of Western Germany, leading in some areas to record flooding that has been described as “apocalyptic.” Fast-rising water not only covered roads and bridges and flooded cellars, it has also engulfed entire towns and destroyed many houses.

Conservative chancellor candidate Armin Laschet, who is currently most likely to succeed Angela Merkel following Germany's general elections in September and has been regularly criticised for too much restraint on climate action, called for more speed on emissions reductions during a visit to affected areas, public broadcaster ARD reported. The accumulation of heavy rain and heat waves is "linked to climate change”, Laschet said. “This means that we need more speed in climate action – at the European, national, and global level,” he added. Political opponents and climate activists lambasted comments Laschet made in a later interview where he reiterated that more speed on climate action was needed globally but also said that "you don't change policy because of such a day" when asked whether the dramatic floods should not lead to a rethink of policies.

Vice-Chancellor Olaf Scholz, the Social Democrat chancellor candidate, also called for increased efforts to protect the climate during a visit to the disaster area.  The deluge "certainly also has something to do" with the fact that climate change is progressing at a rapid pace, he said. "And therefore this must be a further incentive - also as an obligation for all those who have become victims here - that we do everything we can to stop man-made climate change," said Scholz. Environment minister Svenja Schulze, also a Social Democrat, said the disaster showed that climate change had arrived in Germany.

Merkel said the floods were an example of increasingly extreme weather events. During a visit to the U.S., she cited the forest fires in California as another example. "If we look at it over the years, there has always been a storm and a flood," Merkel said. "But the accumulation is simply worrying and calls us to action."

Germans will head to the polls on 26 September to elect a new parliament and thus decide the next government to shape the country’s energy and climate policy. Since the previous election in 2017, climate and energy have consistently moved up among voter priorities. A string of hot, dry summers that took a toll on the country's environment have contributed to massive climate protests led by the Fridays for Future movement, which put emissions-reduction efforts at the heart of public debate.

Intensity of extreme weather will grow as climate warms – scientists

By contrast, the current summer has been far too wet: In June, precipitation reached 96 litres per square metre – 10 litres above the average of the internationally valid reference period from 1961 to 1990. In the first half of July, at around 68 liters per square metre, 86 percent of the target was already met, Andreas Friedrich, spokesman for the German Weather Service (DWD), told Süddeutsche Zeitung.

The extreme weather in southern Germany and before that in North Rhine-Westphalia is partly a result of climate change, he said . As the Earth warms up, the atmosphere can absorb more water vapour. Germany has already warmed up by around 2 degrees Celsius since the beginning of industrialisation. With an average of 19 degrees Celsius, June in Germany was already 3.6 degrees warmer than the reference period average. "Our rain radar analysis of the past 20 years shows: Heavy rain events can occur anywhere in Germany because they are due to the chaotic system," Friedrich noted.

“The extreme precipitation we have been experiencing in Europe over the last few days is extreme weather, the intensity of which is growing due to climate change and will continue to do so as the climate warms,” said Friederike Otto, associate director of the Environmental Change Institute, University of Oxford, and an Associate Professor in the Global Climate Science Programme. “We know this from physics as well as from observations and climate projections.” She added that the fact that such heavy rainfall events have such dramatic consequences is largely due to soil sealing.

The current weather situation has persisted over Germany since the beginning of the month: Low-pressure areas bring humid air from the Mediterranean region. The powerful summer sun then heats up the atmosphere, causing the large amounts of precipitation to unload, Friedrich explained. With torrential rain already the new normal and climate change anticipated to cause further increases in heavy rainfall, experts are recommending a rapid adaptation, particularly in cities. Reducing surface sealing and an expansion of green spaces, for example, can help to better soak up and seep away water. The Federal Environment Agency (UBA) recently said climate change could sharply increase risks from heavy rainfall, heat and drought in the coming decades.

A river flooded the Inden opencast lignite mine in Inden in North Rhine-Westphalia. Mining was halted and water continued to flow into the mine in the afternoon. One RWE employee was still missing on the day after the mine's dam burst, news agency dpa reported.

Risks from heat, drought and heavy rainfall to increase sharply in Germany