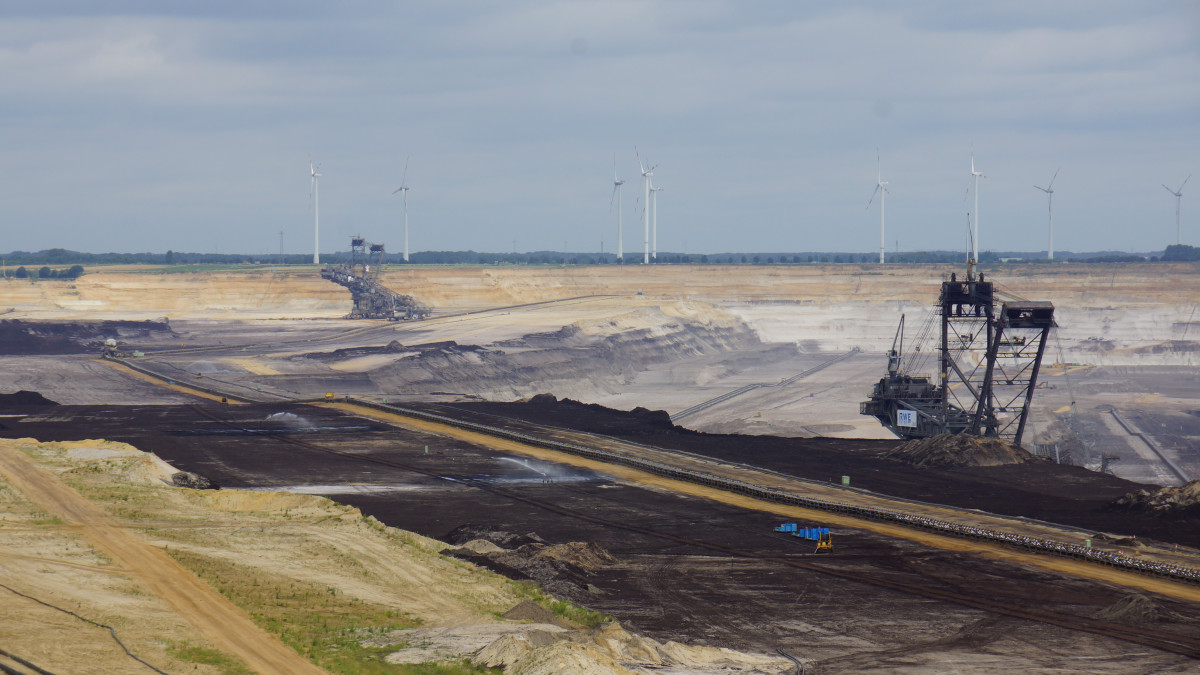 The EU’s proposed new climate and energy legislation will effectively bring forward Germany’s coal exit date to 2030, and rising prices in the Emissions Trading System (ETS) mean coal will become unprofitable in most of Europe, said think tanks Agora Energiewende and Institute for Applied Ecology. It is unclear whether Germany will have to deliver more greenhouse gas emissions reduction by 2030 than laid down in the freshly updated Climate Action Law. The European Commission’s “Fit for 55” package also means that the transformation of industry towards climate-friendly technologies must start in earnest well before 2030 and member states must bolster insufficient EU funding plans to make it happen, Agora Energiewende’s deputy director told Clean Energy Wire.

New plans by the European Commission for more ambitious climate and energy policy are likely to push Germany to speed up climate action and effectively end coal use by 2030, said think tanks Agora Energiewende and Institute for Applied Ecology.

“The German coal exit will be pushed to 2030 through the planned reform of the existing ETS,” Frank Peter, deputy executive director of think tank Agora Energiewende, told Clean Energy Wire. “The CO2 prices in the ETS will at least remain at today’s level, but more likely increase to 80 euros per tonne. This means that coal will become unprofitable in most of Europe.”

The European Commission's comprehensive proposal to get the bloc on track for its new 2030 target of reducing greenhouse gas emissions by 55 percent – the “Fit for 55” package – includes a new emissions trading system for transport and buildings, a sales ban on polluting cars from 2035, more ambitious renewables expansion plans, and a carbon border price on imported goods. This week’s (14 July) presentation kicked off what could be several years of difficult negotiations among member states and the European Parliament before the final reforms are adopted. The proposed changes would heavily influence national policies and the lives of citizens across the European Union.

Following a landmark ruling by the German Constitutional Court, the country's lawmakers decided in 2021 to strengthen the Climate Action Law and to align it with the new EU targets – less than two years after it first entered into force. The reform makes the government's decision to bring forward the target date for climate neutrality to 2045 legally binding and introduces stricter greenhouse gas reduction targets on the way. It raised the 2030 target for emission cuts to 65 from 55 percent.

Any change to Germany’s national climate targets as well as its international obligations under the new EU proposal means that countless assumptions and estimates have to be reviewed in order to adjust the sector emission budgets and power consumption estimates to the new goals.

Only one day before the European Commission published the “Fit for 55” package, Germany’s federal energy ministry presented a new estimate of the country’s 2030 power needs. Taking into account the higher power consumption of the increased numbers of e-cars (14 million), heat pumps (6 million) and more hydrogen (electrolyser) capacity, the ministry raised the power use forecast by 13 percent compared to the previous figures.

Germany’s recent climate law reform could soon be outdated when new EU rules are decided. The country’s climate targets derive from the European Union's greenhouse gas emission reduction plans. The EU’s plans are currently governed by the Union-wide Emissions Trading System for the energy and industry sectors, and by national goals of the effort sharing scheme, for example in transport, buildings and agriculture. Both systems would remain in place under the Commission’s new proposals, but a reform and additional instruments mean more ambitious targets.

In the Commission’s proposal for member states’ contributions to the EU’s overall emission reduction target, Germany has an obligation to reduce emissions by 50 percent by 2030 in the non-ETS sectors. According to Andreas Graf (via Twitter), an analyst at Agora Energiewende, this is “higher than the emissions reductions modelled in a recent study on how Germany could become climate-neutral ,” using very similar assumptions for e-cars and heat pumps as the energy ministry for its new power consumption estimate. 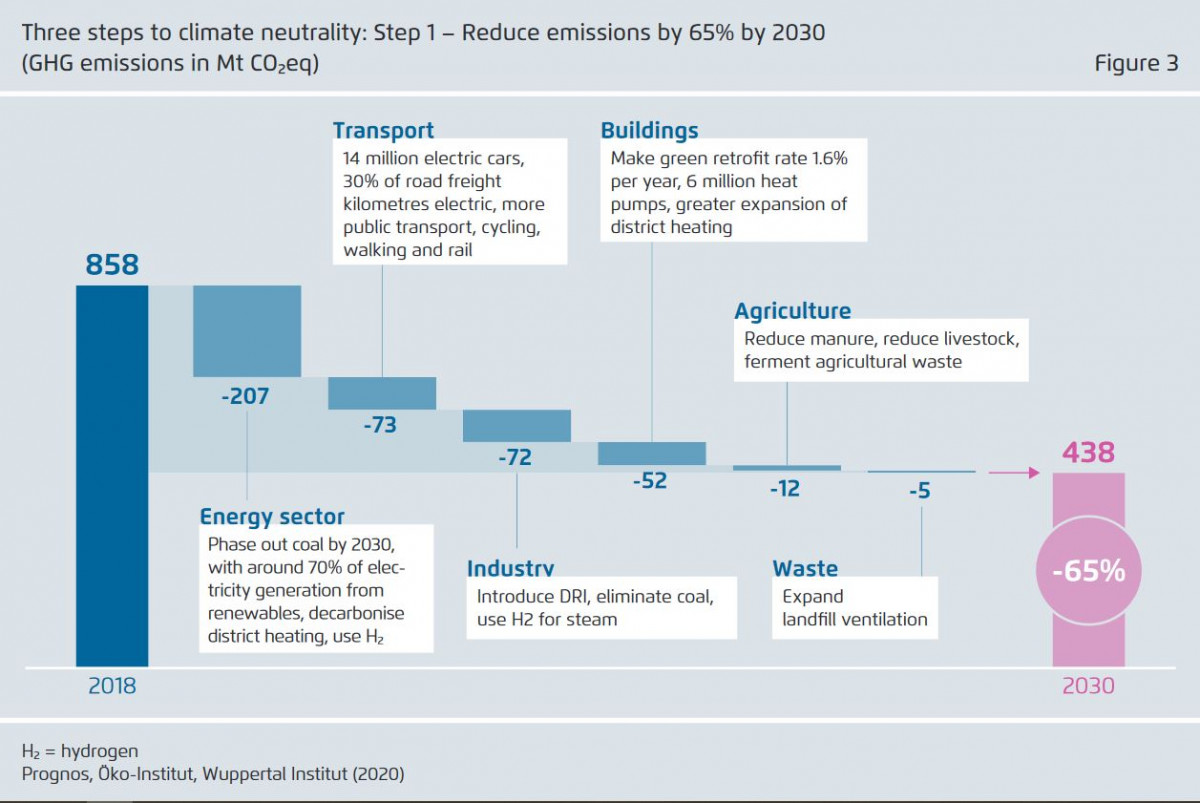 The effects on German policy will depend on how exactly the emission reduction contributions will be distributed among the individual member states, says the Institute of Applied Ecology's Loreck. "At the moment we assume that the German 65 percent target for 2030 is well compatible with the 55 percent target at EU level."

Agora's Peter says Germany might have to do more. “With what we know today about plans for the ETS and effort sharing, it is not yet fully clear how this will influence the German targets,” he said. “However, it is clear that the 65 percent reduction, which Germany recently decided for 2030, is towards the lower end of the corridor.” This makes it all the more clear that Germany has to quickly adopt additional climate measures, he added.

Should Germany miss the European targets in the end, it could end up having to buy effort sharing allocations from European countries that overshoot their target – in essence paying for climate action in neighbouring states, Peter said.

Industry transformation must start in earnest well before 2030

The European Commission’s proposals to reform the existing ETS also increase the pressure on Germany to ramp up climate-friendly industry, as the energy industry alone would not be able to shoulder the planned emissions reduction, Peter said.

“The ‘Fit for 55’ package makes it unequivocally clear that the industry’s transformation must succeed before 2030 with a broad entry into new technologies.” Industry must substantially contribute to emissions reduction and needs the right framework conditions for investments. “The planned volume for financial support through the EU is way too small, and member states have to jump in,” said Peter.

Another area that will likely have to jump into action earlier than anticipated is Germany’s transport sector. It has been the biggest laggard when it comes to emission reduction over the past decades – CO2 output has largely stagnated throughout and the sector only reached its 2020 climate target due to decreased mobility during the coronavirus-related lockdowns. “We have only envisaged additional emission reductions for transport towards the end of this decade, now it may well be, in light of the proposals submitted by the European Commission, that the transport minister will also have to make contributions earlier than he has intended,” said environment ministry state secretary Jochen Flasbarth in a press conference on 15 July. The federal energy minister, Peter Altmaier, said this week that the sudden increase in e-car purchases was one of the reasons why the latest e-car sales estimate was increased from 7-10 to 14 million vehicles by 2030.

Another area where Germany will have take urgent action is agriculture and land use – not least to ensure that those parts of the sector that can function as carbon sinks do so.

“We will have to tackle the land use sector targets as the new EU proposals demand it to be a more ambitious emissions sink than currently planned in the German Climate Action Law,” Peter said.

“Nobody should be under the illusion that this will be easy. For example, in its new climate law, Germany is planning to achieve net removals of -25 million tonnes (Mt) in 2030, 5 Mt less than the revised LULUCF ( land use, land-use change and forestry) proposals - and it's nowhere near on track to getting there,” Andreas Graf wrote on twitter.

Peter warned that due to climate change effects like droughts, Europe’s forests are deteriorating as emission sinks. “In Germany, we simply don’t have the right measures currently to comply with the level of ambition in this sector at the European level.”

Fit for 55 package “nothing less than a revolution;” “saturated with scepticism towards market-based approaches” – media reactions