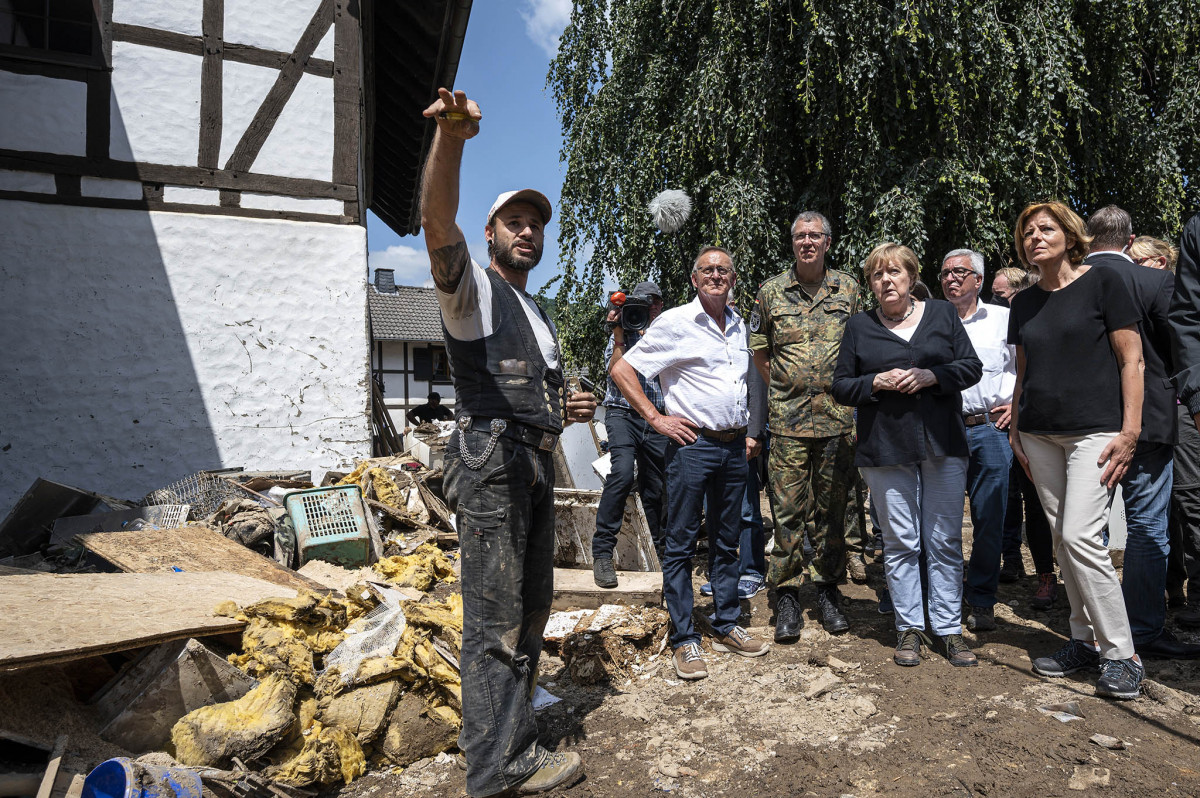 Chancellor Angela Merkel says Germany has to increase its climate protection efforts after catastrophic floods killed over 150 people in the country. The disaster has brought climate change to the centre of the election campaign. After visiting the affected areas, chancellor candidates Armin Laschet (CDU), Annalena Baerbock (Greens) and Olaf Scholz (SPD) all called for the acceleration of climate action efforts. According to election researchers, the Greens could in principle benefit from the fact that the issue of climate protection has been brought the forefront, but the influence of the floods on the outcome of the federal election on 26 September will likely be minimal.

Angela Merkel has said that Germany must speed up its efforts in tackling the climate crisis after devastating floods killed more than 150 people in the west of the country, with many more still missing. "We have to hurry up, we have to up the pace in the fight against climate change,” Merkel said during her visit to the small town of Schuld in western Germany, one of the hardest-hit areas, on 18 July. While one flood in itself is not an indicator of the climate crisis, the number of such extreme weather events has increased in recent years and that was ascribable to climate change, she emphasised. More attention should also be paid to climate adaptation, Merkel said. “A comprehensive analysis is necessary of what needs to be adapted in flood protection, agriculture and forestry.”

Extreme rain caused the otherwise sluggishly flowing rivers in the southwest of Germany to overflow, leading to a natural disaster that counts among the worst in the country’s post-war history. The floods have also heavily affected parts of neighbouring Belgium, the Netherlands, Austria, Switzerland and Luxembourg, with the current death toll exceeding 180. On 21 July, the German cabinet will discuss an emergency package to help the affected areas.

The disaster has pushed climate change to the centre of the German election campaign. “When it comes to climate protection, we need to take our foot off the brake,” finance minister and SPD chancellor candidate Olaf Scholz said, newspaper Bild reports. “We must finally make faster progress with the energy transition, including the switch to CO2-neutral electricity,” Scholz said, adding he finds it “irresponsible” that the CDU/CSU has so far slowed down the expansion of wind turbines and solar plants. Conservative chancellor candidate Armin Laschet has called for more speed on emissions reduction during a visit to the affected areas, public broadcaster ARD reported. In a subsequent interview, he reiterated that more speed on climate action was needed globally but also said that "you don't change policy because of such a day.”

Green party leader and chancellor candidate Annalena Baerbock said in an interview with Der Spiegel: “This disaster is a reason for me to pursue protection against extreme weather events with even greater intensity.” She emphasised the need for investments in climate adaptation and mitigation. “We will only be able to contain this crisis if we really implement climate protection measures now. That means building the world's prosperity on renewable energies instead of burning fossil fuels.” She added: “We must do everything we can to stay on a 1.5-degree Celsius path.”

In an interview with Frankfurter Allgemeine, the leader of the Free Democrats (FDP), Christian Lindner, called for a “new climate strategy” that combines “market-based climate protection in Germany, the management of domestic climate impacts and international cooperation on technologies.”

Influence on the election

According to analysts, the floods will hardly influence the outcome of the federal election, which is to be held on 26 September. "My hypothesis is that the influence will be minimal," Manfred Güllner of the opinion research institute Forsa told Reuters news agency, Handelsblatt reports. In principle, the catastrophe could benefit the Green party because of the focus on climate change. "But even if people directly associate it with climate change, the Greens cannot do anything about it," said Güllner, referring to the fact that the Greens’ chancellor candidate Baerbock does not hold a government office. The Greens could probably not hope for a turnaround from the floods alone, says Matthias Jung of the Forschungsgruppe Wahlen. "But, of course, it shows that events, especially weather events, can bring the issue of climate protection back to the fore. And that is an issue that pays into the Greens' bank account - and would pay in much more if the party were in optimal performance with its top personnel, its appearance."

Güllner and Jung also point out that the election is still relatively far off, arguing that a lot of fluctuation is still possible between now and September. "We have been observing a very high volatility for a long time, which means that the moods for the individual parties fluctuate strongly and can change very quickly because we have relatively little firm commitment to individual parties," Jung said. "The flood disaster is a disaster today, tomorrow and the day after tomorrow. And then it will gradually fade from media attention again,” he added.

According to a recent survey conducted by Kantar for the newspaper Hamburger Abendblatt, 59 percent of respondents expect conservative candidate Laschet to become the next chancellor. Only nine percent expect Green party leader Baerbock to succeed Merkel in September, and 11 percent place their bets on SPD candidate Scholz. The expected outcome of the election differs from people’s preference: only 19 percent of respondents say they would vote for Laschet. Seventeen percent said they would vote for Baerbock, 15 percent would vote for Scholz. Twenty-three percent would not choose any of the four top candidates mentioned, and another 16 percent did not specify. "All the candidates for chancellor are rated as relatively weak by the population," said political researcher Schneider-Haase.

German voters do not elect the chancellor directly, but vote for a party. The chancellor is chosen by the coalition government, with the strongest party usually getting the job.

The Greens, who were just ahead of the CDU/CSU in the polls a few weeks ago, have declined in popularity after public accusations against Baerbock arose over inaccuracies in her CV and copied passages in a book. Current polls show the CDU/CSU leading with around 28 percent of the vote, followed by the Greens with 18 percent and the SPD with 17 percent.