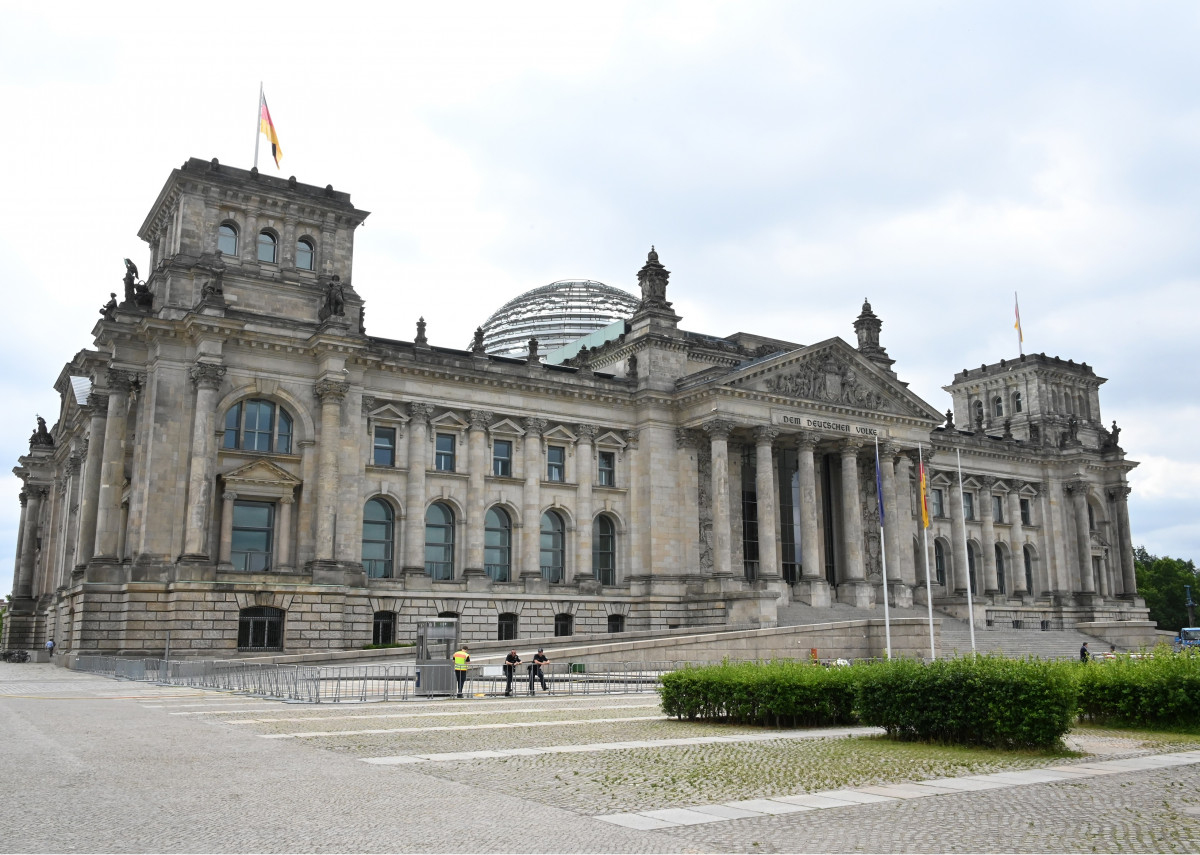 The landmark ruling from Germany’s top court has catapulted climate to the top of the political debate as government coalition partners shifted into election campaign mode, blamed each other for shortcomings of the country’s Climate Action Law and promised a first reform proposal as soon as this week. Conservative chancellor candidate Armin Laschet presented a comprehensive climate action programme by his party, which included the call to increase Germany’s 2030 climate target to 65 percent greenhouse gas reductions. The Greens, who have been leading national polls in recent days, offered talks about more climate action in the coming weeks and already put forth ambitious demands, such as raising the 2030 target to 70 percent. The government’s efforts also stand in the international spotlight as Germany hosts the ministerial climate summit known as the Petersberg Climate Dialogue on 6-7 May.

Germany’s government has promised a reform proposal for the country’s Climate Action Law as soon as this week, after the Constitutional Court had unexpectedly ruled parts of it insufficient. As the national election campaign kicks into higher gear, the ruling has made climate a top issue along with the coronavirus crisis. Parties outbid each other with proposals for more ambitious efforts, as more and more polls show the Green Party in the lead ahead of the September vote.

Social Democrat (SPD) environment minister Svenja Schulze told Der Spiegel that she and the party’s chancellor candidate, Olaf Scholz, would present a draft bill as early as this week, “which will also include a new German climate target for 2030.” She did not specify a target, but highlighted the Expert Council on Climate Change’s recent report, which said that Germany will need to reduce greenhouse gas emissions by 62-68 percent over 1990 levels to be in line with the new EU goals.

Schulze told Der Spiegel investments in climate action must be the “central mission of the next ten years,” naming renewables expansion, hydrogen and e-mobility as key fields. Scholz told Frankfurter Allgemeine Sonntagszeitung that the government needed to act fast to not “gamble away our future.” Schulze and Scholz have repeatedly blamed coalition partners CDU/CSU for putting the brakes on more ambitious climate efforts in the past and said this was the reason the court now had something to criticise.

In a decision widely hailed as historic, Germany's highest court has ruled that the government's climate legislation is insufficient, lacking detail on emission reduction targets beyond 2030. The decision “significantly strengthened” climate action by ruling that if the government fails to protect the climate, it could violate citizens’ fundamental rights, legal experts said. Youth activists, who had lodged the complaint to force the government to do more to mitigate climate change, said the ruling was a timely decision ahead of Germany's federal election this year.

German voters will head to the polls in September to elect the next government that would shape the country’s path towards climate neutrality, and the first which will not be led by “climate chancellor” Merkel after her 16 years in office. Activists have long sought to make the 2021 national vote a “climate election,” but the COVID-19 crisis is set to remain at or near the top of the agenda.

Conservatives outbid each other, as CDU calls for 65% emissions reduction by 2030 and CSU for climate neutrality by 2040

Conservatives in turn have been scrambling to outbid each other in calls for more ambitious action themselves. Armin Laschet, the newly chosen conservative chancellor candidate with good chances to follow in Angela Merkel’s footsteps, announced today (3 May) that his party's leadership has decided a comprehensive climate action programme.

The party wants to reach climate neutrality “well before” 2050, and proposes interim targets for 2035 and 2040, said Laschet at a press conference. The CDU wants to raise the 2030 greenhouse gas reduction target to 65 percent, compared to 1990 levels (currently 55%). The party wants as much of climate action to be regulated at EU level as possible, for example through emissions trading, said Andreas Jung, deputy head of the conservative parliamentary group. The party called for a floor price for the European Emissions Trading System (ETS), but it also said it wants to raise the national carbon price for transport and heating fuels. Jung said Germany had to lead in terms of climate efforts, and at the same time make sure it takes global leadership in climate action technologies.

Markus Söder (CSU), state premier of Bavaria and almost-chancellor candidate of the conservatives, called for climate neutrality by "2040+", instead of the currently agreed goal of reaching it by 2050, reported Süddeutsche Zeitung.

Reform ahead of elections uncertain as Greens make demands

Merkel’s spokesperson said that the government aimed to present a reform proposal in the current legislative period “to implement the key points of the ruling,” and added that the chancellor welcomed the push by Schulze and others. Conservative economy minister Peter Altmaier (CDU) called for an agreement supported by a “wide majority in parliament” in the coming 2-3 weeks to be able to still act on the court’s criticism in this legislative period. However, it is far from clear whether the reform will be passed by the legislators before the elections. Federal opposition parties the Greens and the pro-business Free Democrats (FDP) are part of a majority of state governments, which also have a say in national law-making.

Marco Buschmann, FDP parliamentary secretary in the Bundestag, said “it is to be feared that every proposal will be ground down in the mills of the election campaign.”

In a letter to chancellor Merkel’s government, Green Party leaders, including chancellor candidate Annalena Baerbock, offered talks about more climate action in the coming weeks, and made first demands also beyond a mere reform of the Climate Action Law, reported WAZ. “We believe it is right to take the decision of the Federal Constitutional Court as a starting point to initiate concrete steps for ambitious climate protection before the end of this legislative period,” they wrote, but cautioned that an “all encompassing agreement” would not be possible ahead of the September election. They called for raising the 2030 greenhouse gas reduction target to 70 percent, increasing the CO2 price on transport and heating fuels and vastly boosting the auction volumes for renewables expansion.

The Greens have surpassed the conservatives in recent weeks and currently lead in the polls, making it increasingly likely that they will be part of the next government, if not lead it. 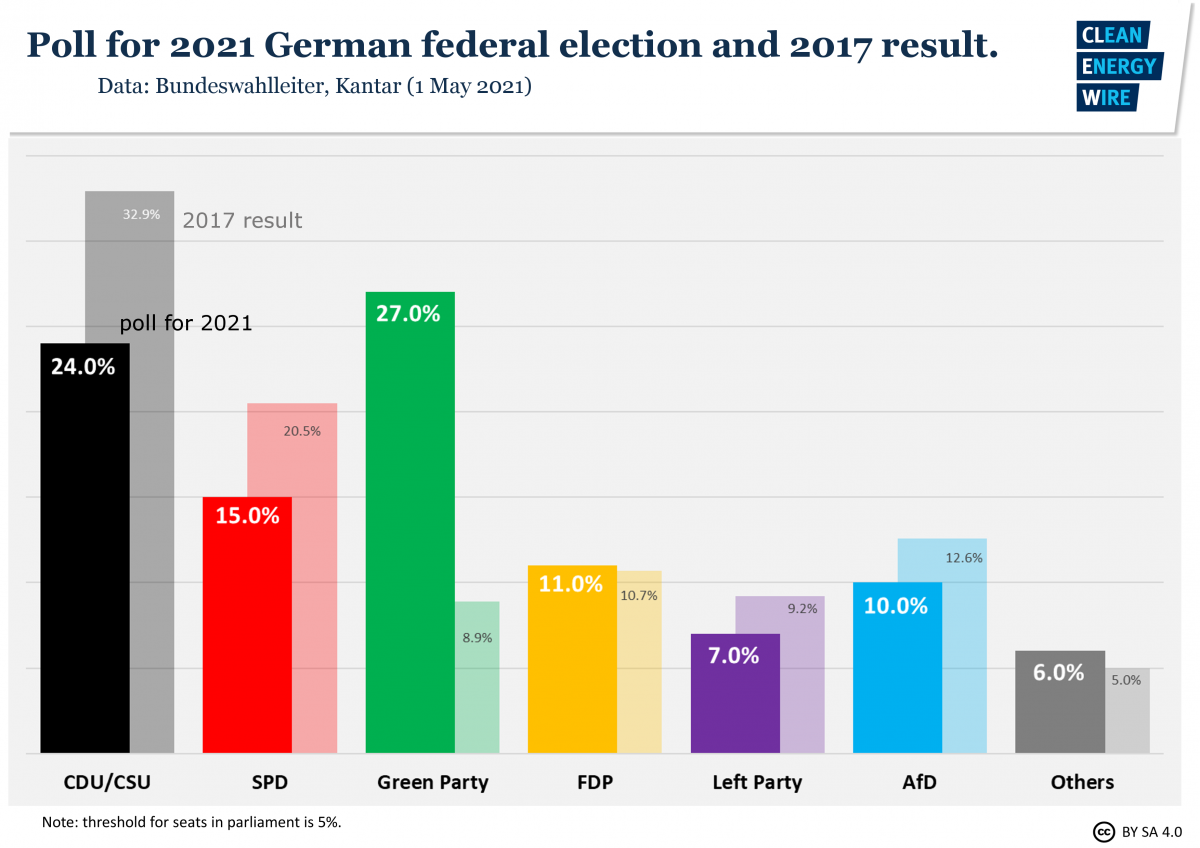 Energy think tank Agora Energiewende* said a quick reform of the Climate Action Law should include the goal of reaching climate neutrality by 2045 and net-negative emissions thereafter, as well as ambitious interim targets for 2030 (-65%), 2035 (-77%) and 2040 (-90%), and “indicative sector targets” for the period after 2030.

All eyes on Germany’s efforts and "climate chancellor" Merkel

The Petersberg Climate Dialogue (PCD) on 6-7 May puts an additional spotlight on the German government’s climate efforts, as about 40 ministers from around the world will meet virtually to discuss international climate in the run-up to the COP26 UN climate summit in November. They will debate adaptation, climate finance and other issues key to a successful COP. A central component is the public high-level segment on May 6, with the participation of UN secretary-general Antonio Guterres, chancellor Merkel and British prime minister Boris Johnson.

Eyes Chancellor Merkel’s (& @CDU's) climate legacy is under the spotlight this week. GER must pledge to double annual climate finance by 2025 & allocate half to adaptation at #PetersbergClimateDialogue.

Chancellor Merkel has traditionally used the Petersberg Dialogue for bigger announcements on climate. This will be her last chance to do so again, as it will be the last such event under her watch. NGOs have said they want Merkel to announce an increase in Germany’s climate finance, reported Tagesspiegel Background. “It remains to be seen whether Merkel will demonstrate leadership at the Petersberg Climate Dialogue, or whether she will bail out without a commitment,” said Jan Kowalzig, senior policy advisor for climate change at NGO Oxfam.

*Like Clean Energy Wire, Agora Energiewende is funded by Stiftung Mercator and the European Climate Foundation.