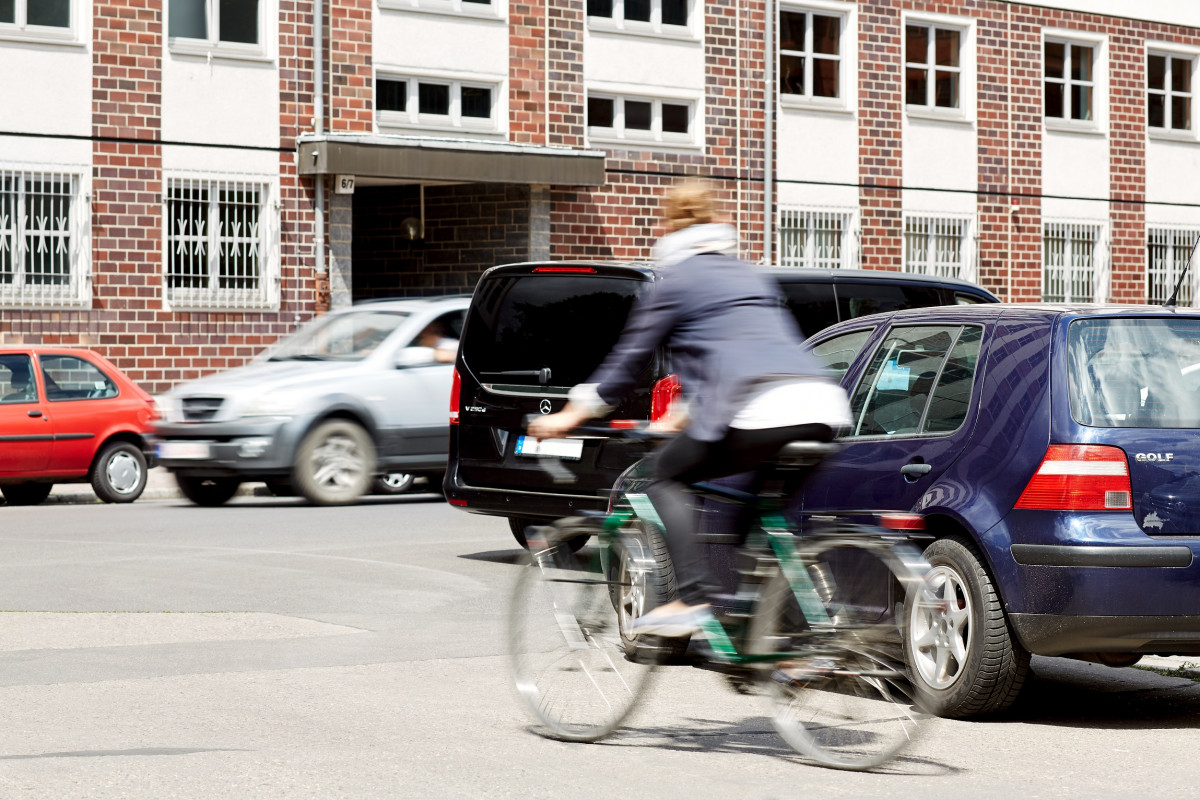 Lockdown measures helped push down emissions, but the transport sector continues to be a 'problem child' for Germany. Source: VCD / Markus Bachmann.

The European Union’s decision to increase its greenhouse gas reduction target to at least 55 percent by 2030 could mean that Germany has to decrease emissions by much more than its current target. Much depends on the concrete proposal on measures and instruments the EU will present in June, but Germany could have to reduce emissions by 62-68 percent over 1990 levels, compared to the current target of 55 percent, said the new Expert Council on Climate Change in its first major report. The researchers assessed the country’s 2020 emissions data and concluded that without one-off effects like those from the coronavirus pandemic all economic sectors would have reached their climate target – except transport. “The analysis of the emissions data is only a snapshot,” said Brigitte Knopf, secretary general of the Mercator Research Institute on Global Commons and Climate Change (MCC) and one of the council's five members. “Even if we have another coronavirus effect in transport this year, it is unlikely to have a structural impact. This means that by 2022 at the latest, we will again be faced with excessively high emissions.” [Updates throughout]

European Union leaders’ decision to increase the bloc’s 2030 target for cutting emissions by “at least 55 percent” means that Germany will have to raise ambitions as well and reduce greenhouse gas ouput by much more than currently planned, said the country’s new Expert Council on Climate Change in its first major report. Germany might have to reduce emissions by 62-68 percent over 1990 levels, said the researchers. The country currently aims for a 55 percent reduction by 2030. The exact instruments and measures the EU decides will determine by how much Germany will have to increase ambitions, said the expert council.

In the report, the council also assessed the 2020 emissions data, published one month ago by the Federal Environment Agency (UBA) and showing that all economic sectors except buildings reached their climate targets. However, without one-off effects such as the coronavirus pandemic, the situation would be different. All sectors would have reached their target, except transport, said the researchers. In the past often called the “problem child” of the energy transition, transport would have missed its target by 10 percent (15 mln t CO2 eq).

The council pointed out that it is almost impossible to determine exactly how much of the emissions reduction was due to the pandemic. But overall, more than half of the emissions reduction in 2020 can be attributed to the economic slump, said Brigitte Knopf, secretary general of the Mercator Research Institute on Global Commons and Climate Change (MCC) and one of the council's five members.

“The analysis of the emissions data is only a snapshot,” said Knopf at a press conference. “Even if we have another coronavirus effect in transport this year, it is unlikely to have a structural impact. This means that by 2022 at the latest, we will again be faced with excessively high emissions.” The council warned that the previous year’s data was highly preliminary and later corrections could easily make a difference between a sector reaching its target or not. It called for a much wider analysis, and additional data sources to really be able to gauge the success of German climate policy. 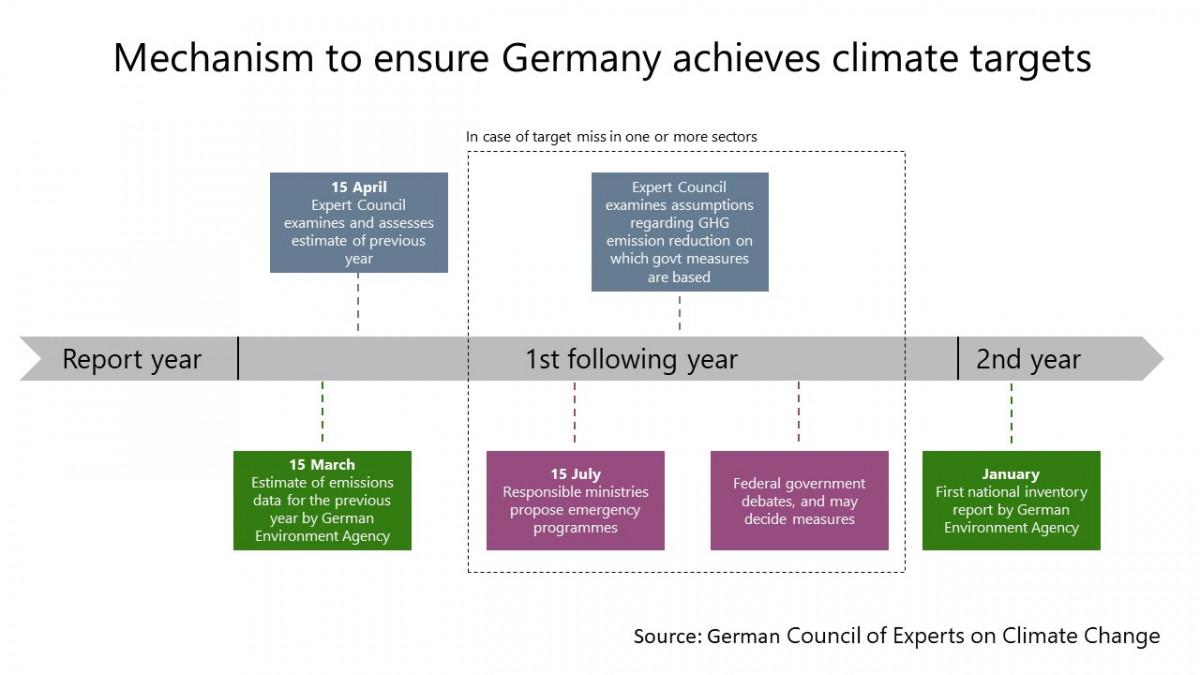 UBA data in March showed Germany’s greenhouse gas emissions dropped nearly nine percent in 2020 – the largest annual fall since 1990 – due to a combination of the COVID-19 pandemic pushing down use of fossil fuels, a shift to renewable energy sources, mild weather and rising CO2 prices. Estimates show that emissions fell in all economic sectors, most notably in energy and transport, as lockdown measures severely restricted economic activity and movement for months. This meant that almost all sectors reached their emissions reduction targets for 2020, with the exception of the buildings sector.

Germany adopted its first-ever major climate law at the end of 2019, introducing binding annual greenhouse gas emission reduction targets for each economic sector for 2020-2030. As the European Union is now debating a more ambitious overall goal for 2030, Germany may need to revise its targets soon.

Leaders of European Union member states agreed in December to increase the EU 2030 greenhouse gas reduction target to at least 55 percent, but the final figure is still being negotiated with the European Parliament, which demands even more ambition. Raising the target will require a set of actions across all sectors of the economy, and the European Commission plans to present proposals to reform all major energy and climate legislation by June 2021 – the “Fit for 55 package”. Whilst it is not yet clear how much of the policy will be EU-wide measures and instruments, member states can expect to be asked to increase their climate action efforts.

The 2019 climate action law also established the council of independent researchers who evaluate and provide a scientific assessment of the emissions data, which sprang into action for the first time this year.

The law stipulates that the relevant ministry is obliged to present an emergency programme of climate action measures if a sector does not reach its target. The independent experts then get to assess "the assumptions regarding greenhouse gas emission reduction on which the measures are based," says the law. Then, the full government cabinet decides the package of measures.

The role of the council was weakened from early drafts of the law to its final version. Originally, it was meant to assess the government’s annual climate action reports, much as the independent Energiewende monitoring commission comments on the annual German energy transition reports.