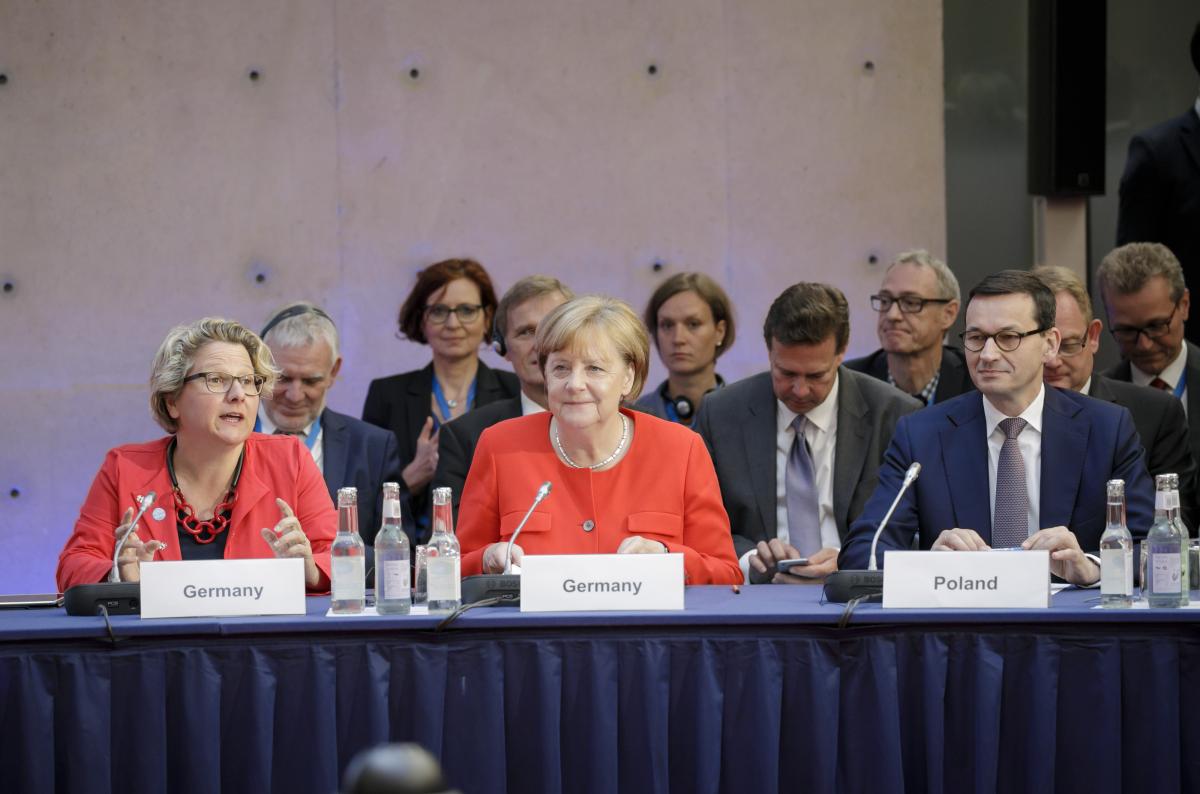 German environment minister Svenja Schulze, chancellor Angela Merkel and Polish Prime Minister Mateusz Morawiecki at the 9th Petersberg Climate Dialogue in Berlin. Source - BMU/Thomas Koehler 2018.
In her speech at the Petersberg Climate Dialogue, German Chancellor Angela Merkel called for more ambitious global climate action and multilateral cooperation. At international level, it will be important to develop a rulebook for the implementation of the Paris Agreement at the UN climate conference in Poland, she said. To help reach climate targets at home, Germany will introduce a climate protection law to make climate policy “more binding”. A strong commitment for a multilateral approach was also a corner stone of the climate section of a joint declaration by Germany and France on their efforts to strengthen the European Union.  [UPDATE: Adds German-French declaration of cooperation on climate change.]

German Chancellor Angela Merkel threw her weight behind a more ambitious drive to tackle climate change, pledging at the Petersberg Climate Dialogue in Berlin more initiatives by her government on the international stage as well as at home.

Germany will make the security aspects of climate change a priority for its two-year term as non-permanent member of the United Nations Security Council, Merkel told climate delegates from more than 30 countries, who gathered for the ninth time in Berlin to prepare the next UN climate summit, which will take place in December in Poland. “Climate protection and adaptation are investments in the future, as they are investments in peace and stability,” said Merkel.

Ambitious climate policies do not just help limit the most severe consequences of climate change, they also offer new opportunities for innovation, and thus for growth and prosperity worldwide, Merkel said. The economic costs of climate inaction, on the other hand, “can hardly be quantified, but they are enormous,” she said. “Climate protection is not a luxury.” It is an ecological necessity and economic rationality, she added.

Reaching the Paris Climate Agreement and the Agenda 2030 for Sustainable Development had both been “great successes” for the global community, she told the delegates. “To make this success historic, it’s now about implementing what has been agreed.”

The Paris Agreement’s targets are ambitious, and the countries’ commitments made to date will not be sufficient to reach the two-degrees Celsius temperature goal, said the chancellor. An important climate action step will have to be taken at the upcoming COP24 UN climate conference in Katowice, Poland, where government negotiators will decide on the so-called Paris rulebook – the implementation guidelines for the agreement.

Following through on her pledge for a multilateral approach, the German chancellor later signed a declaration with French President Emmanuel Macron on further cooperation in Europe, including on the climate agenda. Both countries agreed to develop a EU strategy 2050 for the long-term transformation towards carbon neutrality and to ensure that the European Union took new commitments at the COP24 to update its NDC by early 2020 taking into account possible sectoral emission reductions. The two countries also planned to set up a high-level ministerial working group on climate change and to build a common view on the energy transition as well as tools for triggering sustainable finance and economic incentives, including carbon pricing issues.

The German chancellor has been praised for her global engagement to drive the climate protection agenda, earning her the nickname “climate chancellor”. However, she has come under pressure as Germany’s recent greenhouse gas reduction record has been lacklustre. The country of the Energiewende – the dual move away from nuclear energy and fossil fuels towards an economy largely powered by renewable sources – looks set to miss its own 2020 targets by a mile. Merkel’s government has established a so-called coal commission to find a way to end emissions-heavy coal-fired power generation while ensuring a socially just transition in the affected regions.

The two-day informal climate talks in Berlin are co-hosted by Poland, and provide an opportunity to discuss political issues and prepare the December conference. Polish Prime Minister Mateusz Morawiecki said his country wants to do its share in Katowice to ensure the finalisation of the Paris rulebook, stressing that Poland “has to become independent from old energy sources.”

“We want to face the climate challenges and overcome them. We cannot afford to let climate change go unchecked,” said Morawiecki.

Merkel stressed that Germany had “its hands full” ensuring that the 2030 climate targets are reached, and closing the gap to the 2020 targets as much as possible. This makes the work of the new coal commission so important, as it is tasked with developing a roadmap to phase out coal-fired power generation in Germany, and finding ways to close the gap, she said. Merkel added that in the affected regions people must feel that the politicians put them and their difficult adjustments, such as job changes, first.

On the first day of the dialogue, environment minister Svenja Schulze and Samantha Smith of the International Trade Union Confederation (ITUC) also underscored the need to align social justice with the climate protection agenda.

Merkel added that the social question extended well beyond the current debate about the future of coal. Other sectors like heating also needed more action. “Our big problem child is transport,” Merkel said, citing the concerns of car industry workers about job security as another example for the need for a just transition. At some point, agriculture will also become a topic of heated discussion, Merkel predicted.

Overall, however, Germany’s climate policy must become “more binding,” she said. To this end, her grand coalition government has tasked environment minister Schulze with drafting a climate protection law. This would not be an easy task, considering the diverse interests that would then have to adhere to the binding provisions.

This is a busy week for international climate diplomacy. After the Berlin meeting, the Ministerial Meeting on Climate Action (MoCA), co-convened by the EU, China, and Canada, will take place in Brussels, on 20-21 June. In Berlin, Merkel reiterated her call for strengthening multilateral cooperation. “This year, when multilateralism is under pressure, we also need to get down to brass tacks in climate policy.”

Energy and climate observers have grown increasingly concerned that the ongoing row within Merkel’s conservative bloc hinders any ambitious policymaking. A fight over immigration policy has put severe strain on the conservative party alliance of her Christian Democratic Union (CDU) and its Bavarian sister party, the Christian Social Union (CSU). The ministers in charge of energy transition policies from both parties "can hardly do their job due to all the quarrels and crisis meetings,” the German newspaper Die Welt wrote recently. The Social Democratic Party (SPD) – the third partner in the renewed grand coalition government, which is coming up on its 100th day in office – has so far stayed away from the quarrel.