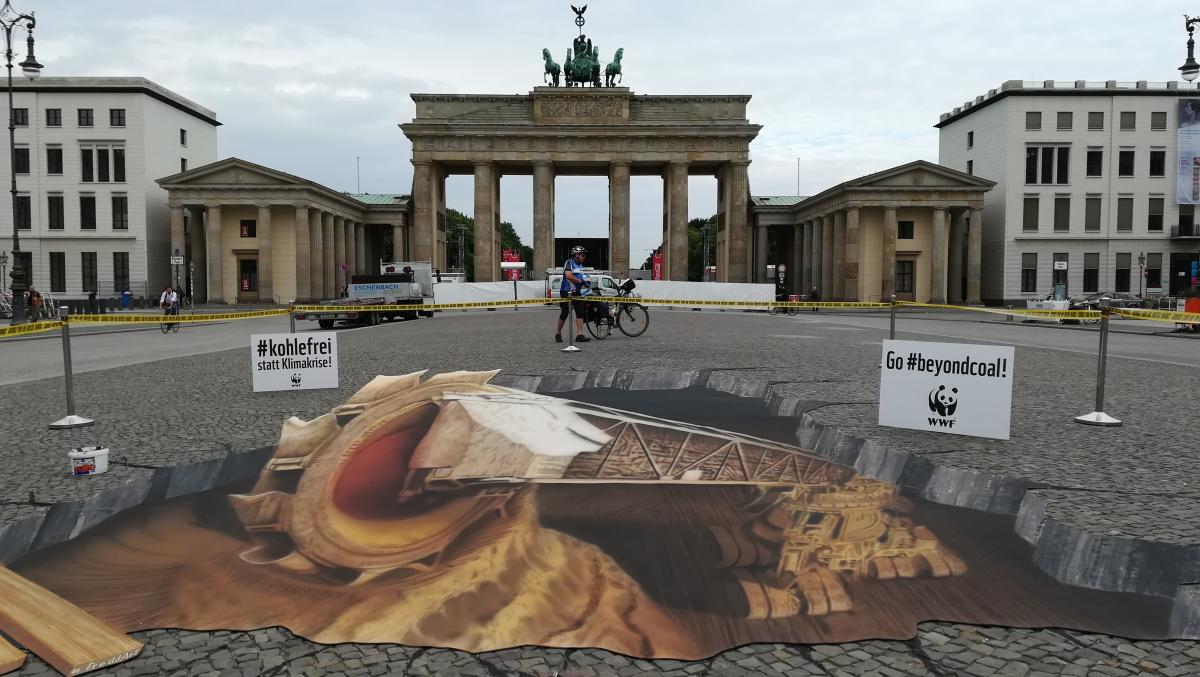 Anti coal protest by NGO WWF in front of the Brandenburg Gate in Berlin, outside the Petersberg Climate Dialogue venue. Source - Clean Energy Wire 2018.
Social justice should be a guiding principle of modern climate policy, German environment minister Svenja Schulze said at the opening of the Petersberg Climate Dialogue in Berlin. Samantha Smith of the International Trade Union Confederation (ITUC) says Germany’s new coal commission could serve as a model for other countries for the ambition to bring down greenhouse gas emissions while keeping economic consequences in affected regions in check. The two days of informal climate talks, which Germany co-hosts with upcoming UN climate conference president Poland, are seen as an opportunity to openly discuss political issues and prepare official negotiations in Katowice in December.

Governments around the world must consider the social consequences of transitioning away from a fossil fuel-based economy, German environment minister Svenja Schulze told more than 30 ministers at the opening of the ninth Petersberg Climate Dialogue in Berlin.

A just transition should be a guiding principal for modern climate policy, Schulze said, adding that the sectors and areas that need restructuring are different in each country. She said Germany had already “successfully tested” the comprehensive social discourse needed for a fair transition when it decided to phase out nuclear power and end hard coal mining. Now, the biggest challenge in Germany was the exit from coal-fired power generation.

At the invitation of the German and Polish governments, about 35 governments from all regions of the world are meeting in Berlin to prepare for December’s UN climate conference in Katowice (COP24) and debate implementation of the Paris Agreement on climate change. The informal talks, which have been held annually since 2010, are seen as an opportunity to openly discuss political issues ahead of UN climate negotiations. This year’s focus on a “just transition” points to the considerable challenges both host countries face in securing the economic future of regions that depend on coal.

Last week, the German government said the country is set to widely miss its 2020 climate target of cutting greenhouse gas emissions by 40 percent compared to 1990. “This is bitter for me to tell you,” Schulze said today. While Germany has been very successful in expanding renewables, the same progress has not been made towards abandoning coal-fired power generation, she said. Renewables expansion is a central pillar of Germany's energy transition, the Energiewende, the dual effort to replace nuclear and fossil power sources with more sustainable alternatives.

The government has set up a new task force to decide on a roadmap to phase out coal. At the launch of this “coal commission” – officially called the Special Commission on Growth, Structural Economic Change and Employment – both Schulze and economy minister Peter Altmaier stressed that the economic future of coal-mining regions had to be secured.

At press conference ahead of the talks today, Samantha Smith, director of the Just Transition Centre of the International Trade Union Confederation (ITUC), said the coal commission could be a model for other countries that must cut carbon emissions in line with the Paris Agreement. “It looks at the urgent task of bringing down emissions and addressing climate change in the German economy, but focuses equally on the challenge of a just transition,” she said. [See the article Germany starts coal exit talks in bid to improve patchy climate record, and the factsheet Germany’s coal exit commission] 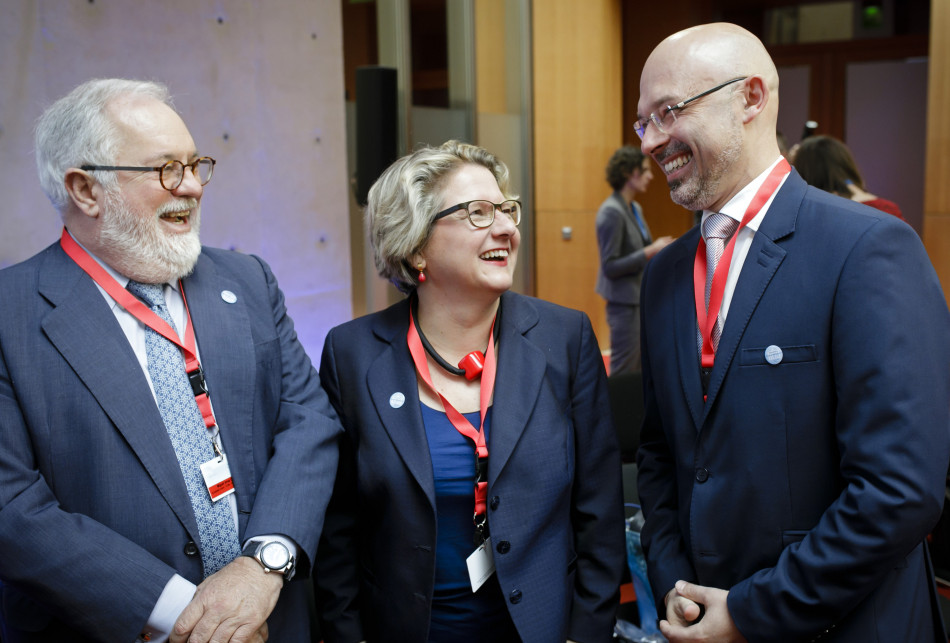 In a newly published ranking by Climate Action Network (CAN) Europe, Germany’s climate policies were ranked as “poor”. Catherine Abreu, executive director of CAN’s Canadian branch, called on Angela Merkel – who has in the past been nicknamed the “climate chancellor” – to show ambition on phasing out coal and investing in a just transition for workers and communities. Merkel is scheduled to speak to delegates on the second day of the Petersberg Dialogue tomorrow, her first major speech devoted to international climate policy since her new government was formed in March.

Germany has often been seen as a trailblazer on climate policy in the past, Abreu said. “The world needs to see that side of Germany again at the Petersberg Dialogue in Berlin. As we saw at the G7, the tone that Chancellor Merkel sets is critical.”

Germany and Poland will also use the two-day talks to focus on climate finance. Schulze reaffirmed Germany’s commitment to the joint pledge by industrial nations to mobilise 100 billion US dollars annually by 2020 for climate protection measures in developing countries.

At the landmark 2015 UN climate conference in Paris, Chancellor Merkel announced that Germany would double its state budget for climate funding from 2 to 4 billion euros by 2020. “I can tell you today that we will manage this doubling,” Schulze said.

Including leveraged contributions from the private and financial sectors, Germany expects to contribute around 10 percent of the total 100-billion sum. [For background, read the CLEW factsheet Climate finance: A brief overview of Germany’s contributions]

According to Climate Home News, the German government will also use the Petersberg Dialogue to call on developed countries to pledge new contributions to the Green Climate Fund (GCF). The fund was established at COP16 in Cancún in 2010 to support climate action for mitigation and adaptation, and is used to mobilise private investments.

International climate finance has been in some disarray after US President Donald Trump decided to pull out of the Paris Agreement and terminate its contributions to the GCF. The European Union and other developed countries are now under pressure to fill the gap.