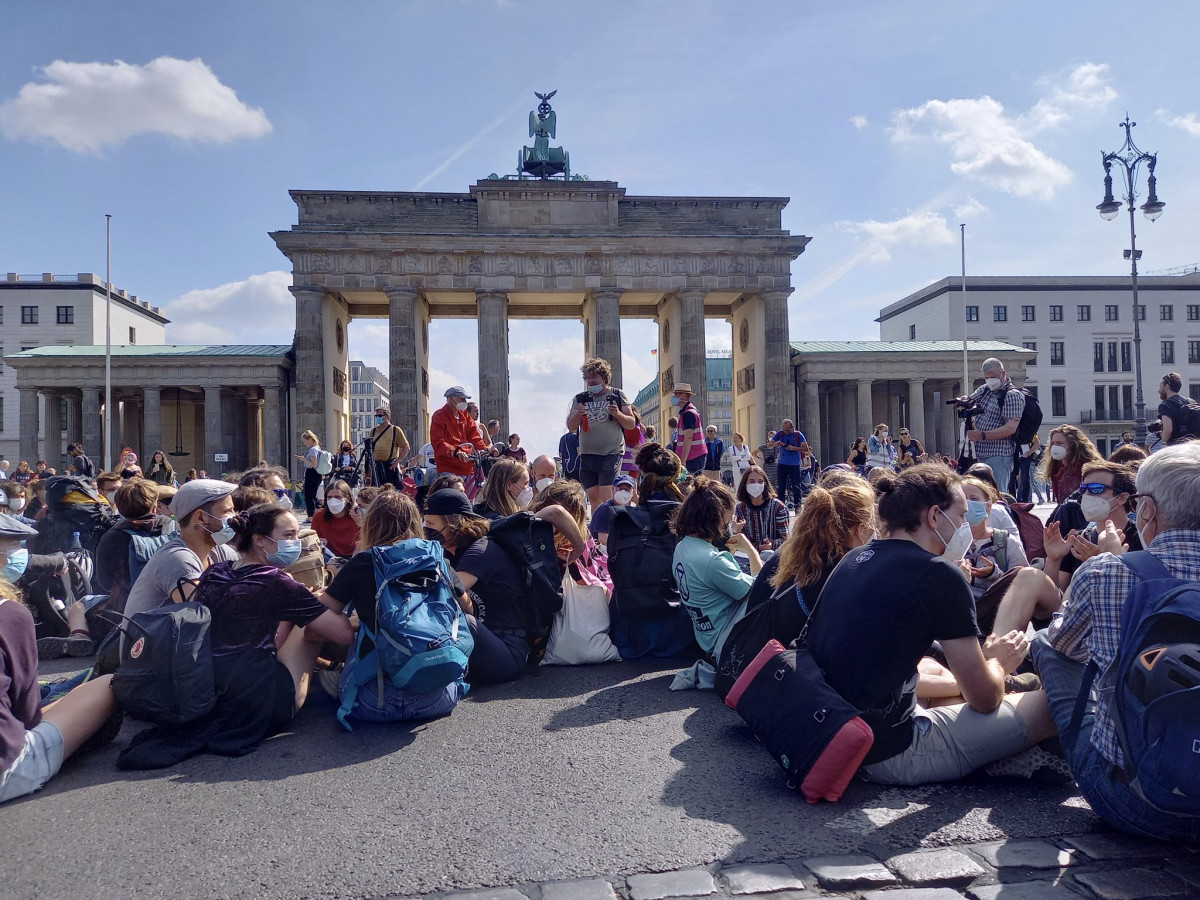 Activists from the coalition group ‘August Rise Up’ took to the streets in Berlin on Monday 16 August to call for more climate action six weeks ahead of the German federal election. Around two hundred people blocked the road in front of the Brandenburg Gate for several hours, while a few dozen activists set up a sit-in demonstration in the nearby Monbijoupark -- adding up to a lower turn-out than organisers expected. The actions kicked off a week of protests organised by Extinction Rebellion, Fridays for Future and around 50 other climate action groups. On 26 September, German voters will go to the polls for the federal election and Berlin citizens will vote in a state election.

“Obviously the government is failing us,” Annemarie Botzki, spokesperson at Extinction Rebellion Germany and campaigner at WeMove Europe, told Clean Energy Wire. “The recent IPCC report has shown how dangerous the current situation is. The government knows this and is still not acting. An airport has been built, a coal plant has gone online, motorways are being constructed… The government is just not acting according to the crisis.”

Six weeks before German voters head to the polls for the federal election, climate activists are holding a week of protests in the capital. The so-called ‘August Rise Up’ is organised by direct-action group Extinction Rebellion and brings together around 50 different climate groups, including Fridays for Future, Ende Gelände and several forest-occupation groups. “Together we can have even more impact,” Botzki explained. The group’s main demand is the installment of a citizen’s assembly on climate. “It’s time to kick the lobby groups out of the parliament and give citizens a chance to really participate in democracy,” they wrote in a press release.

The climate movement has become an indespensible part of the public debate on climate change in Germany ever since it has mobilised masses of young people to protest for more action. In 2019, Chancellor Angela Merkel credited the movement for pushing the government to act more quickly and resolutely on its 2030 climate package. Now, climate activists are pushing political parties across the spectrum to back the 1.5°C global warming limit outlined in the Paris Climate Agreement as the federal election in September draws closer.

The action week was kicked off on Monday with a demonstration at the Brandenburg Gate, a stone’s throw away from Germany’s parliamentary buildings. Around 200 people blocked the road in front of the landmark for several hours, while some of them superglued their hands or feet to the asphalt. The blockade was broken up by police in the early afternoon and several activists who refused to leave the road were arrested. Meanwhile, a few dozen activists set up a sit-in protest in the nearby Monbijou park, which was quickly blocked off by police. 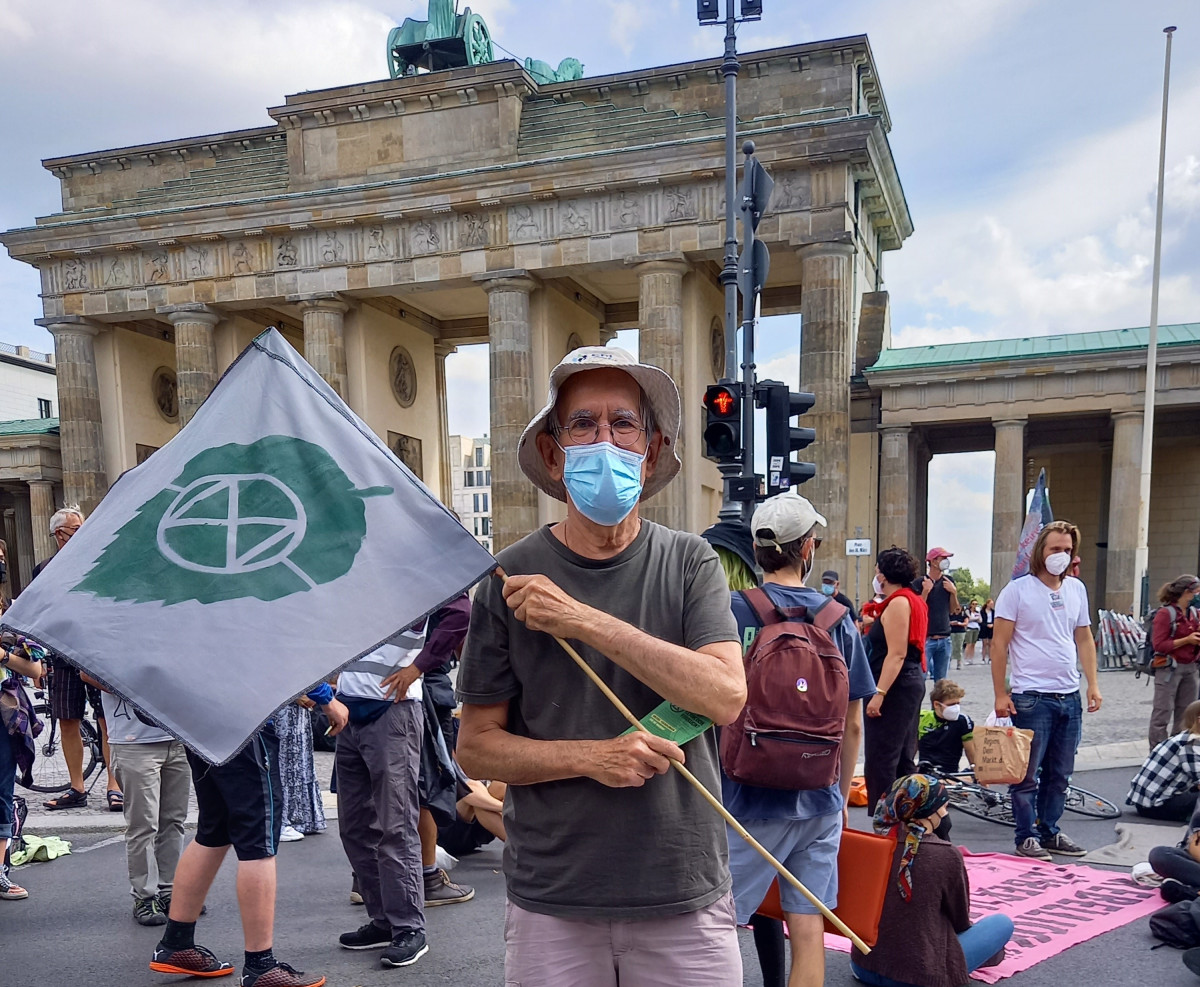 “I am here because we only have a very small window of opportunity left to keep global warming within acceptable limits,” said geoscience student Luca Thomas, sitting on the raod in front of the Brandenburg Gate. The 19-year-old has travelled from Bayreuth, a city in the south of Germany, with two other members of the local Students for Future group to participate in the action week. Because there is so little time, the next legislative period needs to be used to implement far-reaching climate measures, he said. “We first of all need climate legislation that is in line with limiting warming to 1.5-degrees, because at the moment it isn’t,” Luca added, referring to the Climate Action Law which was recently amended after Germany’s highest court ruled that the country’s climate policy was insufficient, as it lacked detail on emission reduction targets beyond 2030 and would therefore put the largest burden on today's young people.

Activists will vote despite dissatisfaction with party programmes

“We have to change our own lifestyles, but we also need political change. It’s not enough to reduce our own carbon footprints,” a 70-year-old activist called Wilfried told Clean Energy Wire. Though the Berliner will cast a ballot in the upcoming elections, he is unimpressed with the party programmes at hand. “Politicians need to clearly tell people what threats we face when we go on like this,” he said. “That’s why I have a problem with the Greens, who say we can have everything: economic growth, climate protection… That’s not possible, those things are contradictory.” He is more positive about the activist-led party Klimaliste (‘Climate List’), whose core aim is to gear German politics towards a clear commitment to limiting global warming to 1.5°C, the lower end of the desired margin formulated in the Paris Climate Agreement. Klimaliste will be participating in the Berlin state elections but will not run on a national level. “In Berlin I will vote for them in any case. But on a federal level I am not sure yet," Wilfried said. 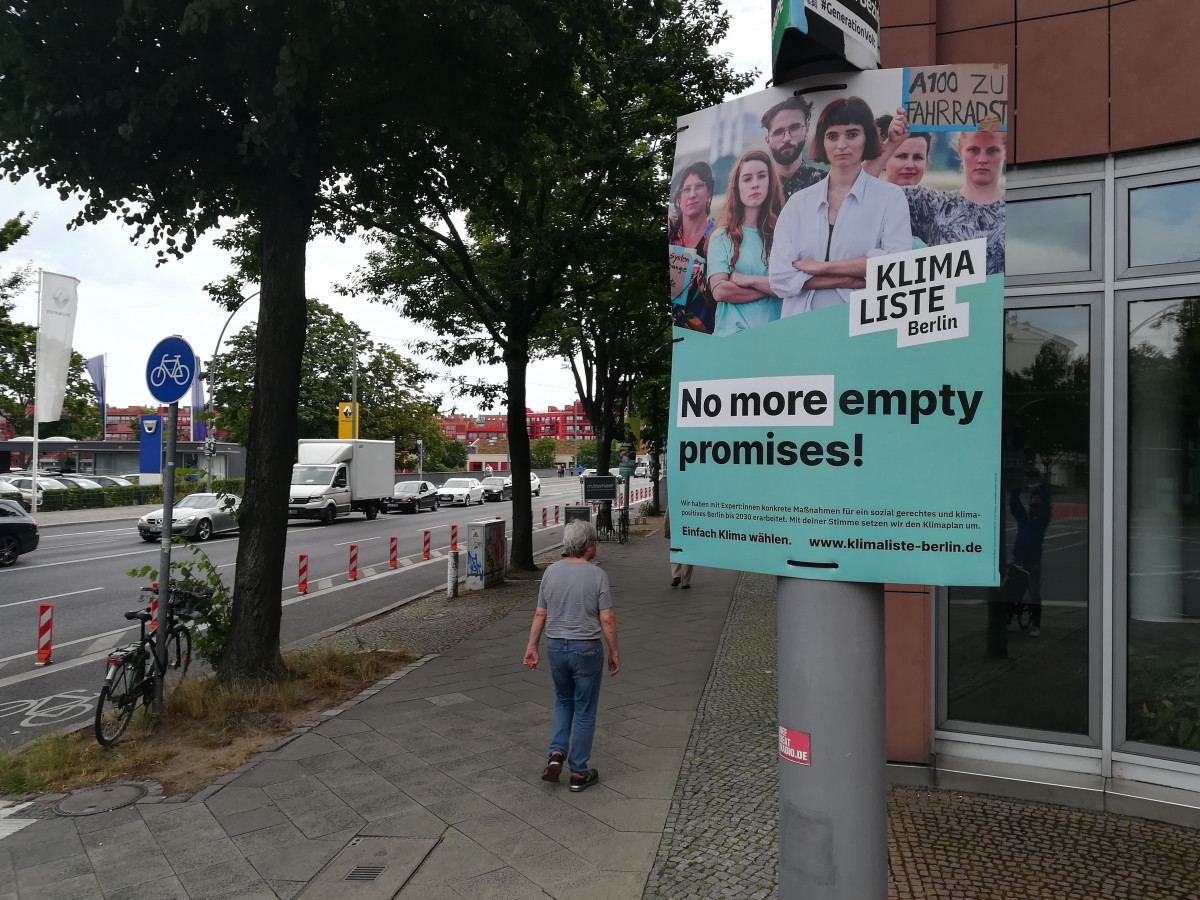 “Many parties have some ideas that I like, but there is not one party I can fully stand behind,” said forest-occupation activist Toki, who prefers to be called by a nickname, while sitting on the road. Nevertheless, she will go to cast a ballot in September. The same holds true for the Berliner activist Karsten. “All party programmes are insufficient,” he said. “But one should still go and vote so that the right-wing parties do not become stronger.”

Since the start of the pandemic, Extinction Rebellion has not organised any large-scale actions - until now. The turnout of an estimated 300 or so people was lower than expected, and much lower than the 6,000 people who took to the streets with Extinction Rebellion in autumn 2019, said press speaker Annemarie Botzki. The organisers had been hoping for at least a thousand participants in Monday's actions. Throughout the week, different climate groups will hold demonstrations, actions and blockades in the city as part of the 'August RiseUp', including a march starting at the party offices of the ruling conservatives (CDU) and social democrats (SPD) by Fridays for Future on 17 August.