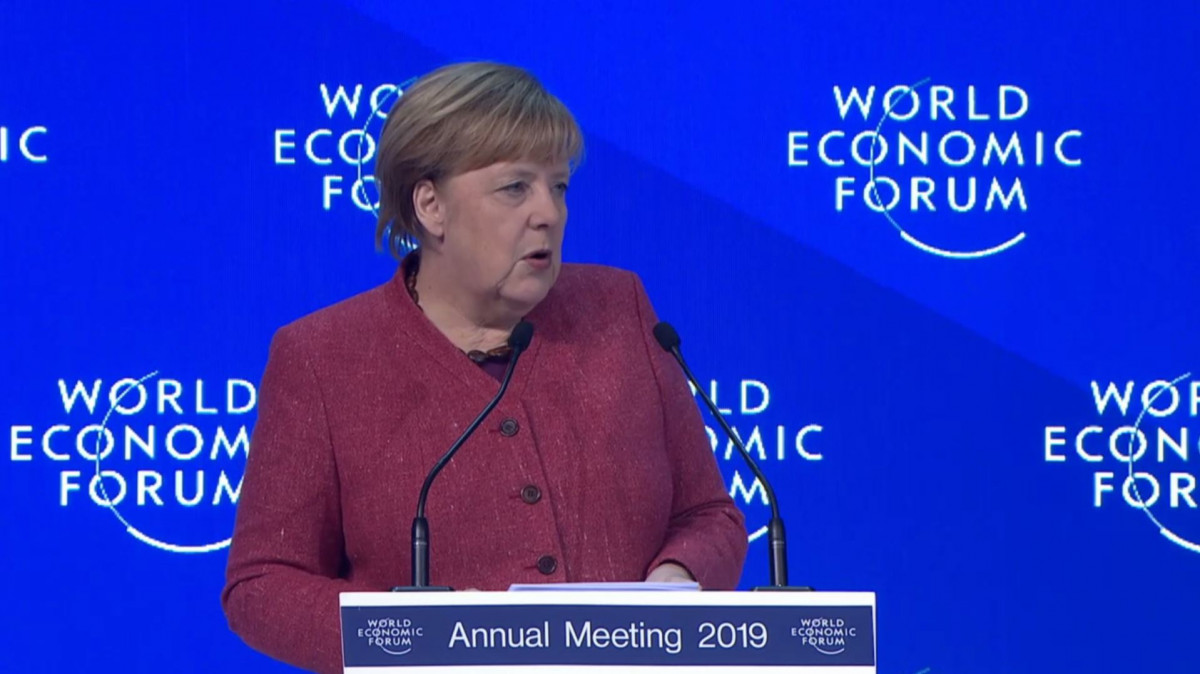 “I am deeply convinced that climate change is of huge importance for us – for the whole world,” said German chancellor Angela Merkel at the World Economic Forum. Photo: WEF 2019.

Developed countries have the responsibility to establish “technologies from which others can benefit”, such as forms of renewable energy production, after they emitted a lot of CO₂ during the industrialisation, German Chancellor Angela Merkel said at the World Economic Forum in Davos, Switerzland. As Germany is phasing out coal and nuclear energy, gas will play an increasingly important role for the country's power supply, she said.

German chancellor Angela Merkel stressed developed country's special responsibility to protect the climate at the World Economic Forum in Davos, Switzerland. “I am deeply convinced that climate change is of huge importance for us – for the whole world," she told told an audience of international business leaders and politicians. She called the energy transition one of the “major future challenges for Germany” in which gas will “play an increasing role” over the coming decades. Merkel said the dispute about where Germany gets its natural gas from is “overblown”, as its importance will increase. “When we exit coal, when we phase out nuclear energy, then we have to honestly tell the people that we will need more gas,” said Merkel. The country required it to secure a baseload of electricity.

Her remarks referred to the minimum amount of power required at any time, which has traditionally been supplied by fossil power plants. The country would continue to buy pipeline gas from Russia, but also build up its liquefied natural gas (LNG) infrastructure to diversify supply, said Merkel.

Germany has long pushed for global action on climate change, but the country has recently failed to make significant progress on its own targets. A commission to define an exit path from coal-fired power generation is due to publish its final recommendations within the next few days.

Whether or not hydrogen produced from renewables would play a larger role in the future was yet to be seen. “I cannot announce the exit from nuclear energy, the exit from coal and from gas at the same time, and then see whether or not the use of [renewable] hydrogen works well. Our global competitors might like that, but I don’t want to go that far with my support for multilateralism,” Merkel joked.

The chancellor renewed her call for a European battery cell production. “The fact that we in Germany, but also in Europe, are still not able to produce battery cells ourselves is certainly a major shortcoming for the future of Europe as an automotive location,” she said. The EU must make industrial policy decisions “to catch up in areas of technology in which we have fallen behind.” Otherwise, Europe would leave large parts of the added value of a future car to other continents.