In the media: Share of renewables surges to record high

The share of renewables in total German power consumption has risen to a record 32.5 percent in the first half of 2015, according to first estimates from the German Renewable Energy Federation (BEE). The increase was mainly due to new wind generating capacity, as well as favourable wind conditions. BEE head Hermann Falk said the figures were good news for the climate and the Energiewende. But he also warned strong wind results must not conceal the fact that the rise of PV systems and biogas has slowed significantly.
In 2014, the share of renewables in Germany's gross power consumption was 27.8 percent.

Find a CLEW factsheet with a power mix overwiew here. 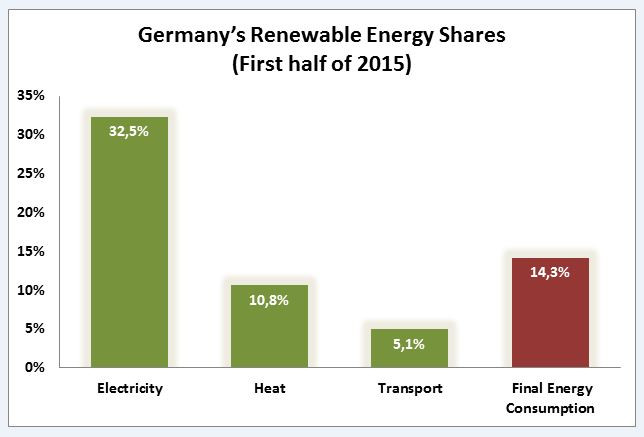 “Climate protection and coal are irreconcilable”

Germany’s transition to a low-carbon future by 2050 is the largest structural change ever undertaken by an industrial nation, but the debate in Germany has been dominated for months by the paltry contribution of the energy sector, writes Fritz Vorholz on Zeit Online. Climate politics got lost in details once again, and long-term targets have disappeared from view. Vorholz says the government will likely give up the proposed climate levy and instead agree to support old coal-fired plants, with high costs for consumers. But the worst consequence of this decision would be to sustain the illusion that climate protection and coal use can somehow be reconciled in the long term, which they can’t, according to Vorholz.

Find a CLEW summary of the latest twists in the debate about the future of coal here.

“Germany’s power consumers pay many million euros too much”

German power consumers pay a lot of money for an inefficient system to guarantee grid stability, according to an unpublished report by the Federal Network Agency seen by the Frankfurter Allgemeine Zeitung. Companies’ exemptions from grid fees added up to 600 million euros last year, but the effect on grid stability was marginal, concludes the agency. Companies that use electricity mainly outside of peak hours can apply for a rebate. The costs are passed on to other consumers. But the agency believes most of the 5500 applicants from previous years were only aiming at windfall gains and did not change their consumption patterns at all, according to the report.

“Energiewende catching up around the world”

All around the world, countries are choosing renewable energy to generate power over nuclear and fossil fuels, according to a report by the World Wildlife Fund and LichtBlick. In 2013 for the first time ever, more renewables plants were built than fossil or nuclear plants, according to the report titled, "Megatrends in the Global Energiewende". In 2014, more than double the amount of money flowed into building renewables plants as into fossil-fueled plants.  The amount of global installed capacity in photovoltaics is fifty times greater now than in 2000, the report says.

Read an article in English in Der Spiegel here.

Almost 39 percent of new residential houses in Germany mainly use renewable energies for heating. According to data from the Federal Statistics Office (Destatis), gas remains in first place with a share of more than 43 percent of houses which got a building permission in 2014. The most popular renewable heating systems extract energy from the air, water or earth.

“Feed-in tariff for photovoltaic systems lowered by 0.25 percent as in three previous quarters”

The feed-in tariff for new PV-systems will be cut by 0.25 percent at the beginning of July, August and September. “Construction in the past twelve months added up to 1,581 MW, which is well below the legal target of 2,400 to 2,600 MW”, said Jochen Homann, head of the Federal Network Agency. The new built capacity was now close to the level at which the feed-in-tariffs would not be lowered anymore, he added.

“Security of supply: a pan-European approach”

Closer integration of European electricity markets offers great potentials for cost reductions, according to a study by think tank Prognos commissioned by the German section of the World Energy Council. Time differences between load peaks offers the majority of the potential today, the authors find. In the future, potentials will increase with the expansion of renewable energies.
The English version of the study will be presented on 1 July in Brussels, according to the World Energy Council.

A decision about a public fund for the decommissioning of nuclear plants and the disposal of radioactive waste will not be taken before the end of the year, reports Frankfurter Allgemeine Zeitung. The results of the government’s “stress test” of utilities’ provisions for the phase out are expected in the autumn, the energy ministry told the green party in a written statement, according to the newspaper.