In the media: Siemens boss swipes at Energiewende on US visit

Siemens boss jokes about the Energiewende

At a conference of oil industry executives in Texas, Siemens CEO Joe Kaeser said that anyone making energy policy for a country needs only to do the opposite of what Germany is doing, according to an article by Winand von Petersdorff-Campen in the Frankfurter Allgemeine Zeitung. Giving state support to the solar industry was like growing pineapples in Alaska, he said, according to the article.  Siemens has for the first time in its history located one of its key board members in a foreign country – Lisa Davies, responsible for energy, works in Houston, the paper notes. Siemens is a big supplier of products to the oil and gas industry but also supplies the renewables industry with wind turbines and hydro power solutions.

RWE shareholders locked horns at the annual meeting in Essen over the need for a capital increase and the size of its dividend, according to an article by Daniel Wetzel in Die Welt. Small shareholders and strategic investors confronted a blocking minority of municipal shareholders, saying fresh money would help RWE overcome difficulties related to the Energiewende, according to the paper. The municipal shareholders do not want to participate in a capital increase because it would dilute their shares and reduce their influence over the company, writes Wetzel. CEO Peter Terium was not the object of their ire, as most shareholders agreed that RWE’s problems were largely due to outside influences, he says, quoting Ingo Speich, portfolio manager at Union Investment: “The energy providers have become the playthings of politics.” Regarding Terium’s plans to confront these issues with financial discipline, savings programmes and money for growth in renewable energies, networks and distribution, one shareholder asked, “Split up in a good E.ON and a bad E.ON – why don’t we do that?...Why is out red brother from Düsseldorf one step ahead?” The shareholder was referring to plans of big utility E.ON to split its operations into two companies of “new” and “old” technologies and eventually sell the latter.

See a CLEW dossier on the big utilities and the Energiewende here.

RWE CEO Peter Terium said at the company’s annual meeting that the German government’s plans to force coal-fired power plants to buy extra EU emissions permits starting in 2017 threatens its future, according to an article by Tino Andresen on the BloombergBusiness website. “The so-called climate contribution for conventional power stations affects our very existence,” Terium is quoted as saying. “This contribution would mean immediate closure for the majority of our lignite mines and lignite-fired power stations.” The government wants to damp emissions output as part of its effort to meet climate targets by 2020. The aim is to cut emissions 40 percent over 1990 levels.

75 municipal utilities are backing Economy and Energy Minister Sigmar Gabriel’s plans for a climate levy for old coal-fired power stations, Thorsten Knuf reports in the Frankfurter Rundschau. The climate contribution was a “very constructive instrument and an effective measure to achieve the 2020 climate targets and to bring forward the necessary modernisation of the power station fleet,” a letter signed by around 80 utility managers, including the communal suppliers in Frankfurt, Munich, Bonn, Aachen, Karlsruhe and Heidelberg, says. The climate levy proposal had received harsh criticism from trade unions and large utilities (e.g. RWE) as well as the Christian Democrats in the Bundestag. On Sunday evening the heads of the ruling coalition of Christian Democrats (CDU-CSU) and Social Democrats (SPD) will meet at the Chancellor’s office to discuss the issue, Spiegel Online writes.

See a CLEW factsheet on the municipal utilities here.

The Federal Environment Agency (UBA) anticipates the loss of 4,700 jobs in the brown coal sector if the planned climate levy on emissions from old coal-fired power stations comes into action, Spiegel Online writes. In a position paper that will be published today, the agency says that the loss of 100,000 jobs in the coal sector, as has been predicted by trade unions Verdi and IG BCE, was “wholly without foundation.” A limited number of jobs would be lost among supply companies and other connected industries, but other jobs would be generated at hard coal and gas-fired power stations as they increase output.

Strom Report has published this new info graphic on the renewable energy sources installed in Germany that also shows which states have the highest coverage of renewable power in electricity consumption. 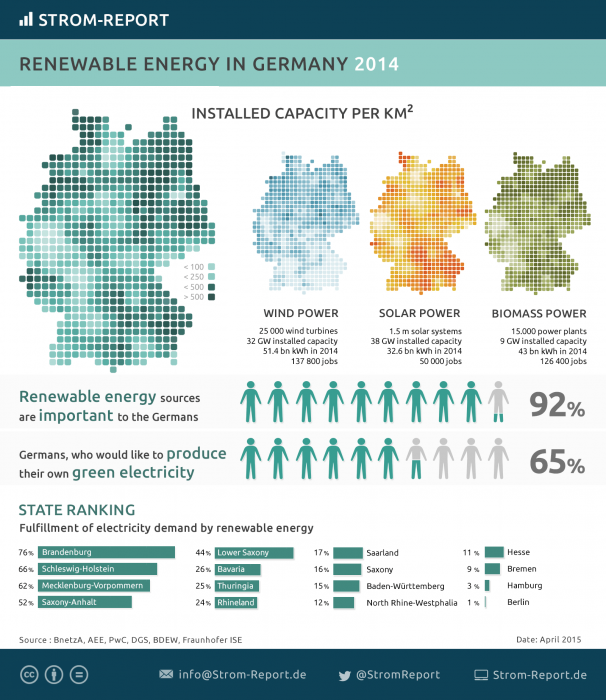 See the explanation and download the info graphic here.

The German Institute for Economic Research (DIW) has published a study finding that the total annual power consumption of the four to five million electric vehicles the German government wants on the roads by 2030 would be small, but uncontrolled charging could result in problematic peak loads in the power system.

Minister Barbara Hendricks is demanding further efforts from industry and politicians to ensure that the 1 million e-car target for 2020 will be met, a press release from the Environment Ministry (BMUB) says. Public funds could be used for a limited time period to promote electric mobility, Hendricks says. Other possible incentives are tax reliefs on company cars. She also proposed further facilitation of charging stations for apartment buildings and in car parks.