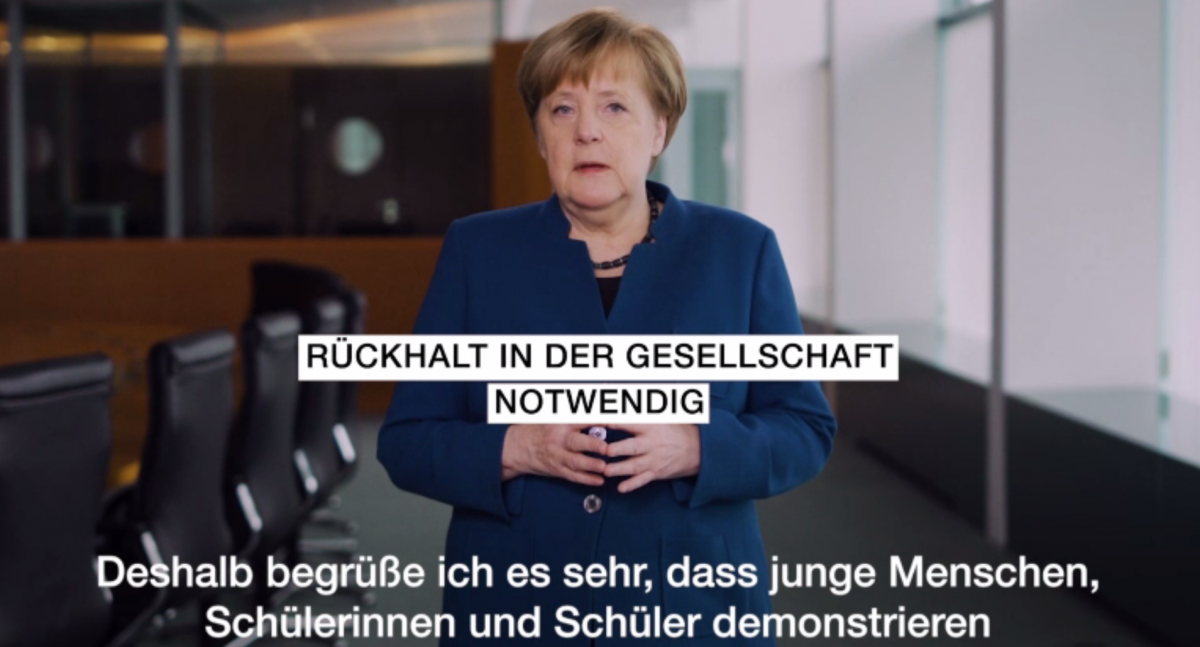 "Support by society is necessary" - Merkel in her weekly video podcast. Source- Federal Government of Germany.

The school student protests for rapid climate action make headlines in Germany as well as in other countries, putting pressure on politicians to take a stance. German Chancellor Angela Merkel said this weekend she “strongly welcomes” the rise of student protests for the climate. The chancellor’s comments came a day after Swedish climate activist Greta Thunberg visited Hamburg, brining thousands of people into the streets. While Merkel's comments were welcomed by climate activists, some members of her own party complained the chancellor is encouraging truancy and undermines "responsible" teachers and headmasters.

German Chancellor Angel Merkel has said she "strongly welcomes" the protests by school students in Germany and beyond who are skipping school every Friday to demand greater climate action from their governments. "I think this is a very good initiative," Merkel said in her weekly video podcast, adding that public support was necessary for the government to pursue its climate policies. "I encourage students to turn to the streets and fight for the climate," the chancellor said.

Merkel said she could understand why many young people want more rapid action, for instance an earlier end to coal-fired power production in Germany. "But I, as a head of government, have to point out that there's a lot we need to take into consideration," Merkel said. Jobs and economic strength have to be reconciled with climate targets, Merkel said, which is why the country's coal exit commission included many different interest groups. That commission has proposed closing the last coal plant in Germany in 2038. "This might seem long from the perspective of school students, but it will demand a lot from us,” Merkel said.

Her comments came as a visit by the young Swedish climate activist Greta Thunberg to Hamburg on 1 March  brought more than 10,000 people to the streets in the northern German city. Thunberg began skipping school last August to protest inaction on climate change inspiring the protests that have turned into an international  student movement. Protesters argue that governments everywhere are failing to adopt policies ambitious enough to avoid the worst effects of climate change.

The student protests come at a crunch time for German climate policy. Merkel's governing coalition is supposed to introduce its signature Climate Action Law this spring, but is split over how to proceed. Meanwhile, lawmakers must decide how to implement the recommendations of Germany's coal commission, which proposed ending the use of coal entirely by 2038. And there are several key elections this year, including for European Parliament in May and in three eastern German states in autumn, where some of Germany's coal mining regions lie.

Merkel had previously irritated climate activists, who interpreted remarks she made  at the Munich Security Conference as speculation that the school protests might be influenced by a foreign power, a claim her spokesman denied. Her explicit encouragement of the protests was welcomed by climate activists - but it was less welcome within her own party, the conservative CDU/CSU alliance.

SPD justice minister calls for lowering the voting age to 16

"I believe it is irresponsible if the Chancellor flatly calls protests that violate compulsory school attendance 'a good initiative'," said Alexander Mitsch of the party's conservative wing, adding that Merkel would "stab her education minister and responsible headmasters and teachers in the back.” The education ministry and many school leaders have said that school attendance must be enforced. CDU economy minister Peter Altmaier had said that while "political engagement is always good, skipping school is almost always bad – the more often you do it, the dumber you get." On Twitter, Altmaier insisted that the chancellor only praised the student's interest in politics. "She didn't say anything about skipping school."

Heinz-Peter Meidinger, the president of the German Teachers’ Association, said for him the student strikes were a difficult balancing act. "On the one hand, we want to educate politically mature citizens," he told the Passauer Neue Presse. "But we cannot leave it to schools and parents to decide whether they go to school or not."

In a survey in Germany's most populous state, North Rhine-Westphalia (NRW), voters of Merkel's party were those most heavily opposed to students skipping school for climate protests. By contrast, voters of the Conservatives' government coalition partner, the Social Democrats (SPD), were largely supportive of student strikes. Also in the Passauer Neue Presse, SPD justice minister Katarina Barley called the protests "great," adding that "they do away with the prejudice that young people are not politically active." Barley said the students' attitude was "something we should have more of" and called for reducing the legal voting age in the country from 18 to 16.