Germany's big wind-power producing state Schleswig-Holstein faces "difficult" coalition talks after the conservative Christian Democrats (CDU) - the party of Chancellor Angela Merkel - garnered a surprisingly clear election win on Sunday, writes the Frankfurter Allgemeine Zeitung. The current state government of Social Democrats (SPD), Greens and the small, regional South Schleswig Voters' Association (SSW) did not gain enough seats to continue. A grand coalition (CDU and SPD) or a three-party-alliance such as the CDU, liberal Free Democrats (FDP) and the Green Party are both possible. Both the FDP and Greens made a strong showing, with the Greens defying negative national trends, as Germans look ahead to federal elections in September.
During the campaign, conservative frontrunner Daniel Günther (CDU) promised to increase the minimum distance between wind turbines and the nearest home, and slow down wind power development to let lagging power grid expansion catch up. According to a separate article in Die Welt, the Green Party’s state Energiewende minister Robert Habeck after the vote acknowledged differences in energy policy positions, but said that coalition building would not fail “because a wind turbine needs to be built 20 metres further away.” 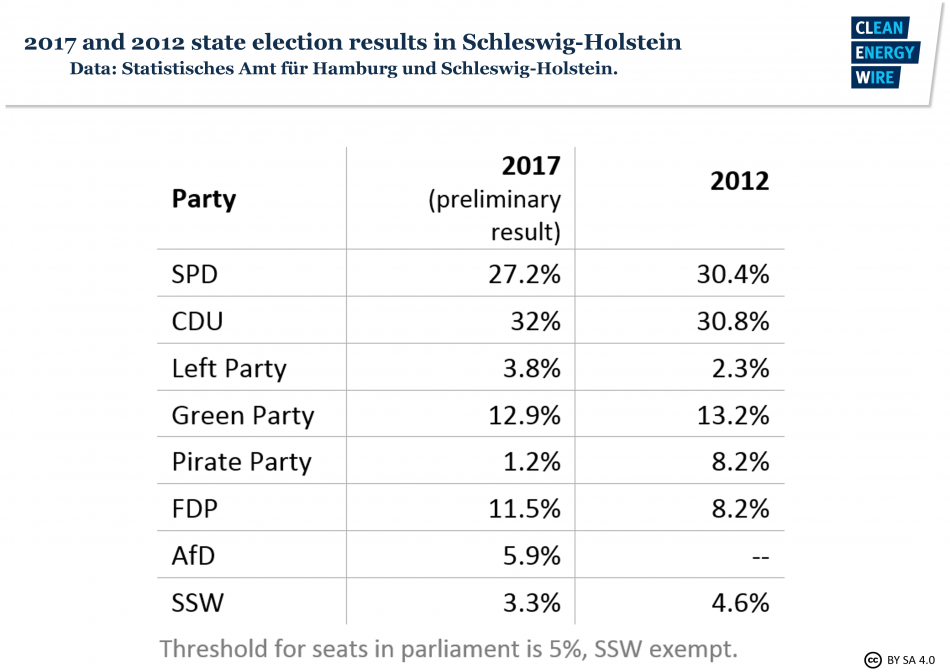 Read CLEW’s article on the election campaign Wind power course at stake in election in "cradle of Energiewende" and find more information in the CLEW factsheet on the German state elections in Schleswig-Holstein.