Strong winds and sun all over Germany might have pushed renewable power production to a new record share on Sunday. Renewable generation covered 95 percent of German power consumption at 11 o’clock on Sunday, according to preliminary data from energy think tank Agora Energiewende*. While power consumption is estimated at around 58 gigawatts (GW), solar provided around 26 GW, wind almost 21 GW, hydro 3 GW and biomass 5 GW. But the think tank warned final data might deviate considerably from the first estimates.
“While it is possible - or even probable - we saw a new record share of renewable energy production on Sunday, it is far from certain the share was above 90 percent,” explained press spokesperson Christoph Podewils, who noted wholesale electricity prices fell to minus 125 euros per megawatt-hour at the time. He also said it was likely that Germany will see further records of renewable share at certain peak hours in the coming months, because solar power is nearing its yearly summer peak and total installed renewable capacity, including wind, has risen considerably compared to last year.

Find the “Agorameter” including the estimates here. 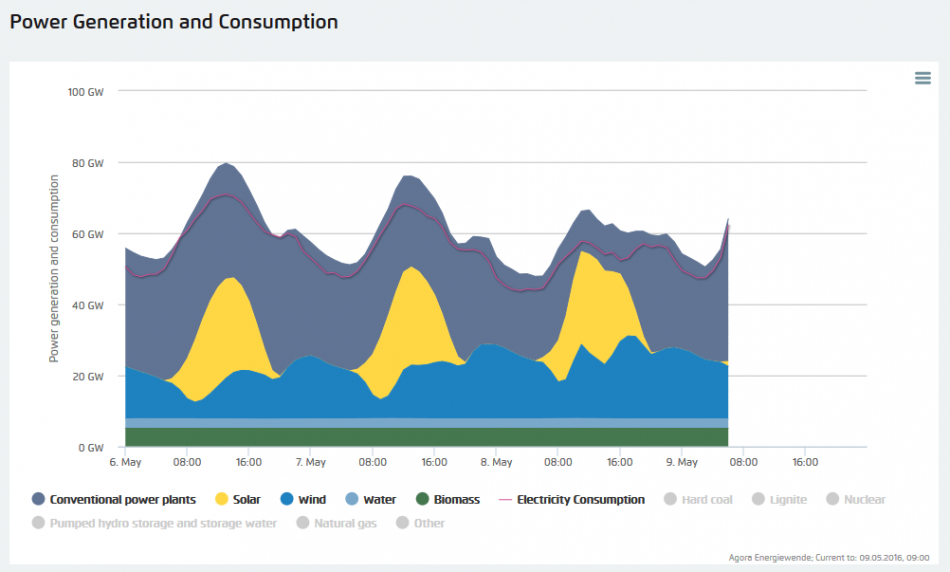 “Consequences of a German coal phase-out”

An early German coal phase-out between 2020 and 2045 would cost 71.6 billion euros and reduce German CO2-emissions by 859 million tonnes, according to a study by ewi Energy Research & Scenarios, published today. “The reduction in CO2 depends solely on the retirement of corresponding emissions allowances in the European Trading System (EU ETS),” emphasised ewi managing director Harald Hecking, alluding to compensation effects in the EU ETS if Germany exited coal. In case of a phase-out, the cheap coal would need to be substituted by expensive natural gas, resulting in the high costs for the energy economy and the consumers, write the authors of the study. Ewi based its calculations on the concept for a stepwise decarbonisation of the German power sector by think-tank Agora Energiewende* from January 2016.

Find the study in German with the executive summary in English here.

Read an article by Handelsblatt (behind paywall) in German here.

“Which goals are driving the Energiewende? Making sense of the German Energy Transformation”

A large majority of policy experts believe climate protection is among the most important goals of Germany’s Energiewende, but most also identify additional aims, according to a paper published in Energy Policy. “When asked if the Energiewende would make sense even if climate change did not exist, two thirds of the participants agreed,” write the authors. This fact “demonstrates that the goals and motivations driving the Energiewende are more complex than often assumed”.

Read the paper in English here.

Political activist network Campact! calls for improvements for wind power in the reform of the Renewable Energy Act (EEG), in an online campaign launched on Monday. The organisation criticises last month’s push by Volker Kauder, head of the conservative CDU/CSU parliamentary group, to limit the growth of both onshore and offshore wind power. Campact! lobbies against a ceiling of 2,500 megawatts additional wind power per year and supports citizen’s energy projects. The organisation initiated the campaign this week because state premiers will meet with Chancellor Angela Merkel on Thursday to discuss the proposed changes.

Find out more about the proposed EEG reform in a CLEW factsheet.

Horst Seehofer, state premier of Bavaria, calls for a state fund to finance the energy transition and avoid rising electricity prices, writes Der Spiegel. The fund would be used to dampen the effects of the Renewable Energy Act (EEG)-surcharge on the electricity prices for consumers. The proposal represents a “change of course” by Seehofer, who two years ago rejected such an idea by Bavarian economics minister Ilse Aigner. He argued: “We must not impose today’s energy costs on future generations. That would not be sustainable policy.”

The complaints by the wind power industry about planned reforms of the Renewable Energy Act (EEG) “seem largely excessive” in light of the sector’s healthy condition, write Franz Hubik and Klaus Stratmann in Handelsblatt. “The wind power industry practices the most severe form of lobbyism I have seen in my political career so far,” explains Christian Democrat member of the Bundestag Michael Fuchs in the article. At the same time, more wind turbines than ever before have been added to the grid within the past two years and offshore facilities will continue to be highly subsidised, write Hubik and Stratmann.

By taking over the German lignite assets of Vattenfall, Czech utility EPH shows it believes in the future of lignite in Germany, whereas Vattenfall does not, writes Julian Schwartzkopff, researcher at energy and climate think-tank E3G, in energypost. “This raises questions for the German government about its climate policies – and for the Swedish government which has to decide on the deal.” EPH’s purchase might be a bet on the failure of German climate policy, or a taxpayer bailout, argues Schwartzkopff.

The European Commission is considering dividing the German electricity market into two price zones, writes Klaus Stratmann in Handelsblatt. The German grid so far fails to even out the discrepancy between energy oversupply through wind power in the north and scarce production in the south, which is problematic: “Germany’s energy transition has caused problems for all neighbouring countries that are no longer tolerable,” a source within the EU Commission told Handelsblatt. Denmark, for example, complained about not being able to export its surplus power to southern Germany. This development was inconsistent with the European Union’s efforts to create a single energy market and splitting Germany into two energy zones could provide a remedy.

Photovoltaic (PV) power plant tender prices in Germany continue to fall, reports pv magazine. Winning bids for 21 PV power plant projects with a combined capacity of 128.21 megawatts came in at 6.94 cents per kilowatt-hour to 7.68 cents/kWh in the fourth round of pilot auctions, according to the Federal Network Agency (Bundesnetzagentur). It had previously said the winning bids’ average feed-in tariff was 7.41 cents/KWh. The agency received 108 bids with a total volume of 540 MW at the auction.

Read the report in English here and a more detailed version in German here.

Find CLEW’s article Auctions to set the price for wind and solar.