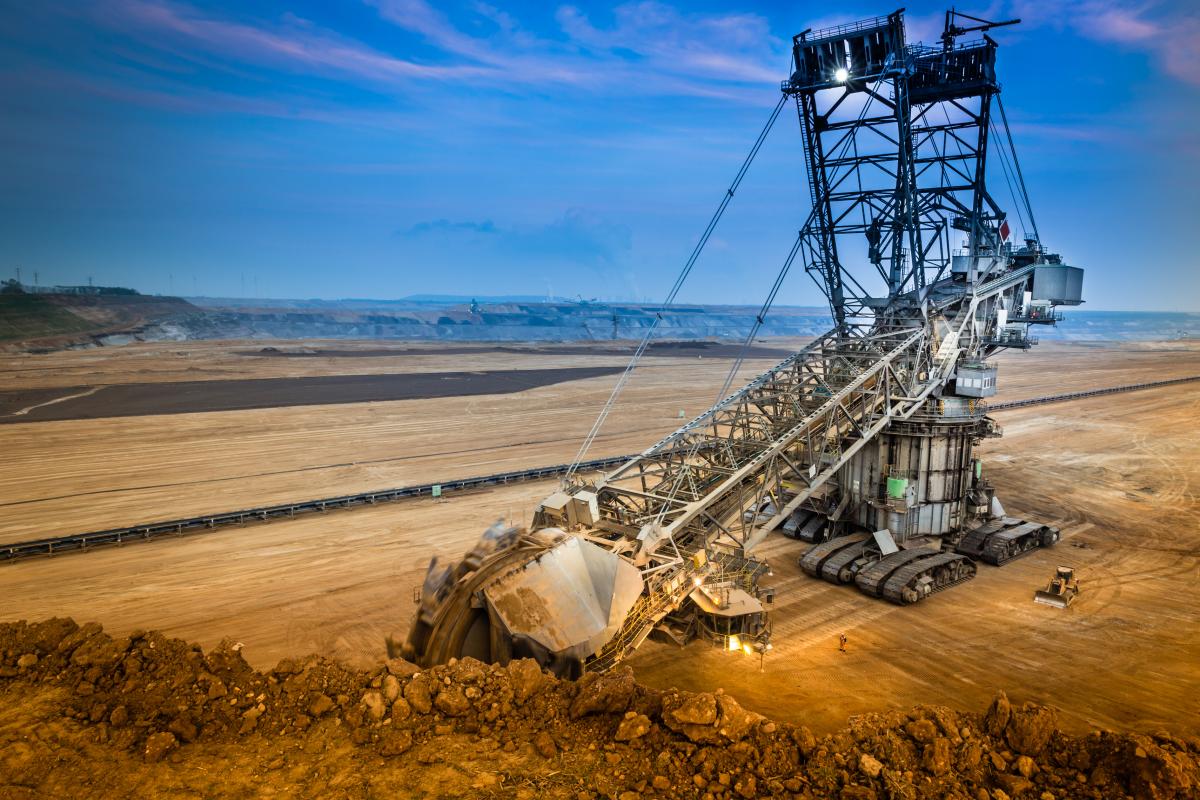 A German coal exit would involve putting a stop to both coal mining and the building of new coal-fired power stations. Photo: © ted007 - Fotolia.
A think tank proposal on how Germany should exit coal has pushed the debate on the Energiewende's future into full swing, exposing deep fault lines. The environment ministry and Greens backed the plan for a phase-out of coal power within 25 years. But others said Germany should not pursue a coal exit on its own. [Update: Adds new IG BCE statement]

A proposal for a phase-out of coal energy in Germany by 2040 has been met with a mixture of applause and rejection by parliamentarians, trade unions, researchers and ministries.

Think tank Agora Energiewende* suggested Germany needed to build a broad social consensus on a gradual withdrawal from coal mining and burning. The environment ministry and the Green Party applauded the plan but it was met with resistance from a regional minister and unions, and received only a tentative acknowledgement from the energy and economy ministry.

A spokesperson from the environment ministry said the Agora paper formed a good basis for discussions because it aimed to avoid structural ruptures and guaranteed supply security.

The Association of Energy and Water Industries (BDEW) also supported the idea of a structural dialogue on the development of the fossil power station fleet and how to achieve the climate targets in a socially acceptable fashion while ensuring security of supply, a spokesperson told the Clean Energy Wire.

The government aims to pass a Climate Protection Plan 2050 in cabinet by mid-2016. It should provide a "solid basis for decarbonising the economy”, according to the environment ministry. Many climate activists and some government officials say it should contain details on how Germany will phase-out coal, particularly since the country is set to miss its climate targets for 2020. But industry representatives have called for the plan to be dropped. Environment minister Barbara Hendricks, who fought for a strong climate agreement in Paris, has said Germany is capable of exiting lignite-fired power generation by 2040. Polls in 2015 found that a majority of Germans are in favour of a coal phase-out.

A spokesperson for the Ministry for Economic Affairs and Energy would only say that minister Sigmar Gabriel “had taken note” of the proposals, adding a previous Gabriel statement that a simultaneous exit from nuclear power and coal did not make sense for an industrial nation like Germany. Commentators suggested that Gabriel, who is set to become the Social Democrats' candidate for Chancellor in next year's general election, is still rattled by the trouble caused by his proposal for a climate levy on old lignite plants.

Joachim Pfeiffer, the Christian Democrats' speaker on energy policy in Parliament, told the Clean Energy Wire: “The suggestion is completely unusable because it ignores key framework conditions of energy and climate policy.”Pfeiffer, a member of Chancellor Angela Merkel’s CDU, who form the ruling coalition together with the Social Democrats in Parliament, said only a common European approach, such as the European emissions trading scheme, could be a cost-efficient way of achieving climate protection. If Germany acted alone, greenhouse gas emissions here would instead be emitted abroad as industry would leave the country, he warned.

The mining union and the regional government in charge of eastern Germany's lignite area also rejected plans to phase-out coal.

Michael Vassiliadis, head of trade union IG BCE, said the suggestions in the Agora paper were “not convincing”. “Germany with its high performance industry needs different priorities,” he said in a press release. Instead of discussing the coal exit, Germany should pursue a path of innovation and solve the question how large amounts of renewable power could be stored in the future, Vassiliadis said. Vassiliadis last year had led the fight against the climate levy, which was eventually dropped.

Albrecht Gerber, economy minister of the regional state of Brandenburg, also insisted he saw no reason to question last years "climate compromise" on the withdrawal of old lignite plants. It was impossible to set an expiry date on lignite as long as the technology to store renewable energy was unavailable, he said.

In contrast, the Green party’s Oliver Krischer said a social consensus about how to phase-out coal was the right approach. “The experience with nuclear power and hard-coal mining has taught us that this is the only way to avoid permanent social conflicts.”

Social Democrat Matthias Miersch, spokesman of the parliamentary working group on the environment, agreed that a coal consensus was necessary and required a broad dialogue with representatives from politics, business and society. He said the Agora proposals were the “right contribution at the right time”.

MP Florian Post (Social Democrats) said an exit date for coal had to be discussed with all actors involved. “We have to be aware that a coal phase-out will cause costs which, in the end, consumers and small and medium-sized companies will have to bear most of.” The pace of the exit, therefore, had to be carefully planned.

Shutting down coal as off 2018 or keeping lignite instead of gas?

The government last year decided to mothball a number of old lignite power plants to keep the climate targets within reach. But even government advisors warn that the ambition to reduce CO2 emissions by 40 percent by 2020 compared to 1990 levels will be hard to achieve. Total German CO2 emissions, including other sectors like transport and heating, even went up slightly in 2015, mainly because lower temperatures raised demand for heating.

Agora's proposal explains how to organise the phase-out, as well as how to implement it and how to distribute the costs. The think tank argues that Germany should decommission three or four old coal plants per year from 2018, so the last plant can be switched off in 2040. This can be organised without making power much more expensive and also without endangering supply security, according to the analysis by Agora Energiewende. “Germany, as a traditional coal country, and country of the Energiewende, can no longer escape this debate,” writes director Patrick Graichen in the preface of the report.

Graichen argues that Germany’s climate targets for 2030, 2040 and 2050 already imply an exit from coal-fired power generation. “Denying this fact would mean to deceive and create false hopes for stakeholders in impacted regions, companies, and energy service providers,” states the report.

In light of Germany’s decarbonisation goals, a gradual phasing-out of coal-based electricity is “ultimately unavoidable”, Agora Energiewende states in its coal consensus proposal.

But Manuel Frondel, head of the department "Environment and Resources" at the Rhineland-Westphalia Institute for Economic Research (RWI), disagreed. “A complete exit from lignite power is wrong and not at all inevitable,” he said. There are alternatives to a coal exit but not if Germany insists on sticking to its greenhouse gas reduction targets of over 80 percent by 2050, regardless of what other countries in the world are doing, he argued.

“Despite all the good intentions voiced in Paris, this is not foreseeable, so Germany has to be careful when pioneering climate protection,” Frondel told the Clean Energy Wire. Lignite should be the fuel of choice to accompany renewable sources because Germany has such large reserves, he said.

A round table to hammer out a consensus

Agora says coal-based electricity generation must be gradually reduced. Coal was last year used for 42 percent of all electricity generated in Germany. Despite the country’s surge in renewable power, coal's share in its power mix has barely changed over recent years, endangering plans to cut emissions.

Agora proposes a non-partisan dialogue process to work out the details of the phase-out. “The goal of this process would be to reach a consensus about the future of coal that is both comprehensive and long-term,” the think tank said.

Agora sketches a concrete path for the coal exit, aiming to minimise costs. It says the government should convene a round table as soon as possible, where stakeholders should aim to reach an agreement this year. The deal could then be translated into a law with broad parliamentary support.

According to the Agora proposals, old generating capacity of 3 gigawatt (GW) - equivalent to three to four large plants - should be decommissioned every year initially, starting in 2018. No more open-cast lignite mines should be opened, and federal funds need to support the transition in mining areas. The “structural change fund for lignite coal regions” should be supplied with 250 million euros annually, adding up to a sum of around 6 billion euros over the entire phase-out period. 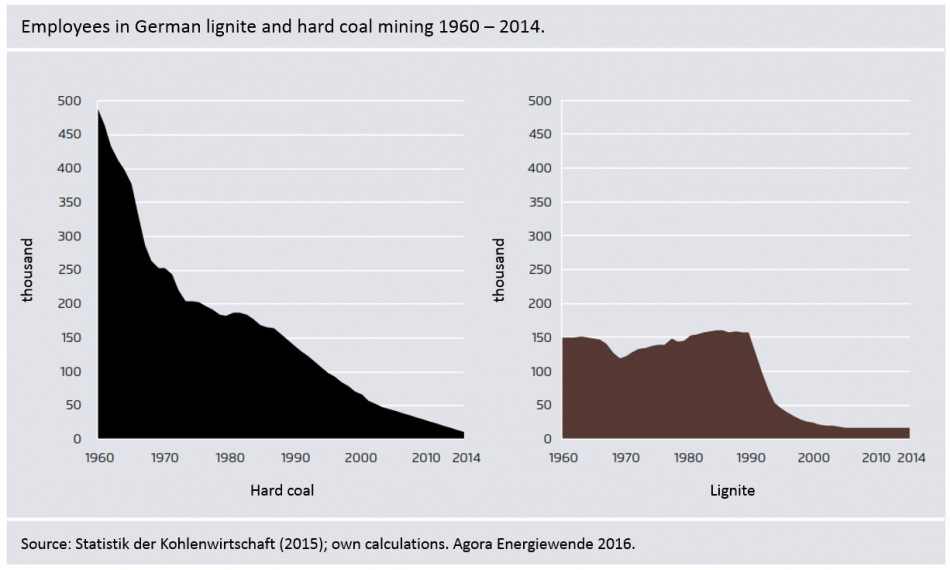