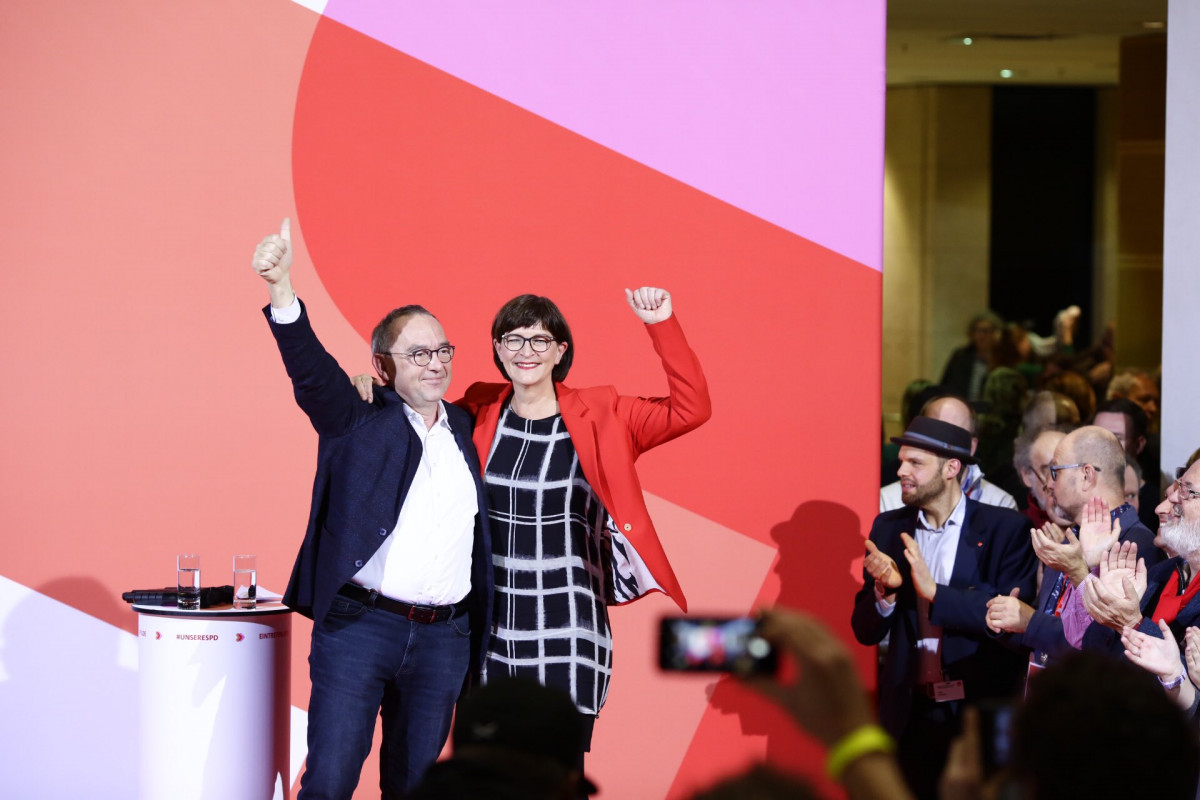 The members of Germany’s Social Democratic Party (SPD) have unexpectedly voted for a more left-leaning leadership, casting doubt on the future of the coalition with Chancellor Angela Merkel’s conservative CDU/CSU alliance. The designated SPD co-heads, Norbert Walter-Borjans and Saskia Esken, have stressed repeatedly that their party should renegotiate parts of the 2018 coalition treaty, including reopening the 2030 climate package, agreed in late September. The new leadership still has to be approved by the upcoming national party conference.

The designated co-heads of the Social Democratic Party (SPD), Norbert Walter-Borjans and Saskia Esken, have called for changes to the government’s approach to climate action, setting the scene for difficult talks with conservative government partner CDU/CSU that may ultimately end the already shaky coalition.

“We couldn’t explain to anybody – especially the young generation – if we just sat back after having agreed the climate package and said ‘we’re done’ for this legislative period,” Walter-Borjans told the public broadcaster ARD after his election. “We need more effective climate action measures.”

The SPD base unexpectedly voted for the two members of the party’s left wing to become its first-ever leadership duo, further questioning the stability of the coalition with Merkel’s conservatives. Walter-Borjans, a former finance minister from the federal state of North Rhine-Westphalia, and Esken, a member of the federal parliament hailing from the Southern state of Baden-Wuerttemberg – none of whom have been well known on the national level – beat federal finance minister Olaf Scholz and his running mate Klara Geywitz from Brandenburg.

The situation in Germany had changed since the federal coalition treaty was agreed in early 2018, mainly with an economic slowdown taking place, but also in regard to climate, Esken said in the ARD interview. “We have seen two very warm and dry summers with a drought affecting the agriculture sector, which has increased citizens’ readiness for change in regard to climate action,” she said. “That’s why we now have to debate how to deal with this at the party conference, and how to approach the [CDU/CSU] to bring about such changes in the coalition treaty.”

Walter-Borjans and Esken now have to be approved by the SPD’s federal party conference on 6-8 December. Ahead of the party membership vote, the candidate duo has called for improving the climate package the government had decided in September. The package, which includes the country’s first major climate law and a national price on CO₂ emissions in the transport and buildings sectors, was widely criticised as insufficient to reach Germany’s climate targets.

Esken and Walter-Borjans told the ARD their selection did not automatically imply an end to the current government alliance with the conservatives, but highlighted that they see changes in climate action and large investments in other sectors as necessary. Walter-Borjans said the so-called grand coalition “is not the right combination in the long run. However, we’re in it, and on this basis we have to say what needs to be done. If there is a blockade by the coalition partner on the new tasks, then we have to decide it cannot continue.”

CDU party head Annegret Kramp-Karrenbauer and CSU leader Markus Söder both rejected calls for renegotiating the coalition treaty simply because the SPD has a new leadership. Since the 2017 federal elections, both the CDU/CSU and the SPD have suffered a number of defeats in regional votes and slipped in federal opinion polls. The coalition currently holds no majority in the polls. The Green Party has rocketed in national polls, as the Fridays for Future student protest movement has kept the climate crisis high on the agenda in Germany. Climate change is frequently identified by Germans as their top concern..