No future for German ski regions / A pending wind merger

“Government sees no future for two thirds of ski regions”

The government predicts that with a 2 degree Celsius warming, 61 percent of Germany’s ski regions would not be suitable for winter sports, even with artificial snow applied, Der Tagesspiegel reports. Naturally stable snow conditions would be moved 300 metres higher up the mountains, the government reply to the Green Party reads. The result would be a distinctly shortened winter sport season.

The share of energy from renewable sources in the EU's gross final consumption has almost doubled within ten years to 16 percent in 2014, according to EU statistical office Eurostat. The EU’s target is to increase the share to 20 percent by 2020, and to at least 27 percent by 2030. Of all EU member states, Sweden had the highest renewable share (52.6 percent) in 2014 and Luxembourg (4.5 percent) the lowest. Each EU member state has its own 2020 target. Of the 28 EU member states, nine have already reached their national targets. But France, the Netherlands and the United Kingdom are the furthest away from their goals. Germany’s share of renewables was 13.8 percent in 2014 and is aiming to be at 18 percent in 2020, according to the release. 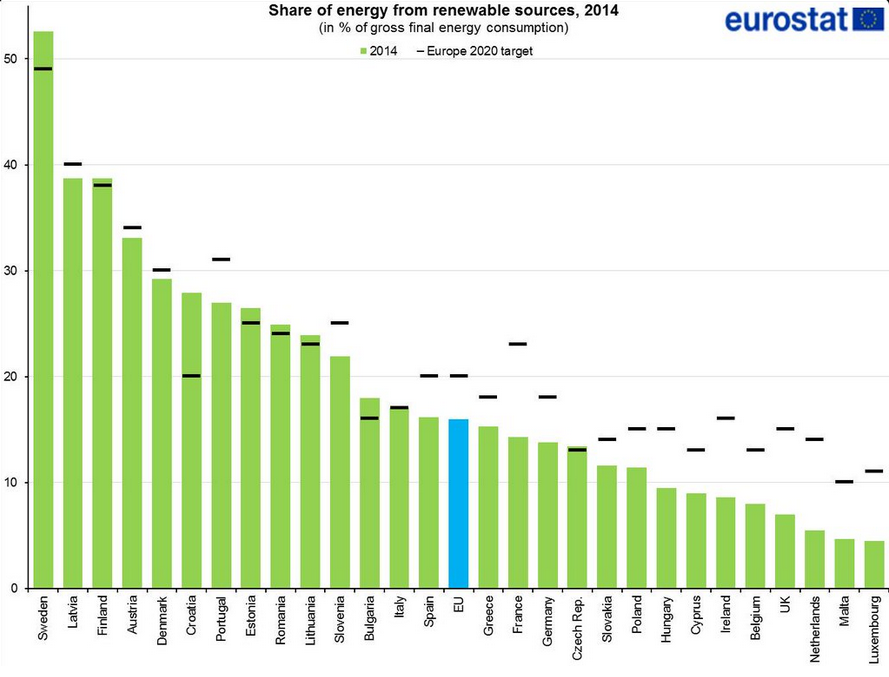 “Who pays for the nuclear phase-out?”

The pending conclusion by the expert commission on the cost distribution for the nuclear phase-out will confirm that nuclear power is not only dangerous but also expensive – even years after the last reactor has been shut down, write Petra Pinzler and Claus Hecking in Die Zeit. The most difficult question for the commission and the government is, how much of the nuclear clean-up cost they can impose on the polluters - the large utilities - without driving them into bankruptcy, the authors say. It is likely that the “large political embarrassment” that is the nuclear clean-up will be divided into smaller – albeit not less expensive – fractions. The decommissioning of reactors is likely to be paid for in full by utilities, while the state and the tax payer will help them out when it comes to nuclear waste storage, the authors conclude.

Read a CLEW factsheet on securing utility payments for the nuclear clean-up here.

“No success without a majority”

In order to establish a climate-friendly way of life, the question of fairness has to be answered, write Oliver Powalla and Hendrik Sander in an opinion piece for the taz. While the cost-benefit analysis for climate action as a whole is usually positive, low-income households are suffering the most when power prices rise and when landlords use insulation refurbishments to increase the rent. “Should people on unemployment benefits have to pay more while Exxon Mobil is spared?” the authors ask. A rising renewables surcharge and new efficient household appliances would be more affordable for everybody if money was distributed in a fairer way. A tax on former CO2 emissions - a tax on wealth - could be an ecologically fair approach, the authors say.

German engineering giant Siemens and Spanish renewable energy group Gamesa are close to a deal to merge their wind power businesses, insiders told news agency Reuters. A deal was imminent and the joint venture would have an enterprise value of around ten billion euros, report Alexander Hübner and Jose Elias Rodriguez. A Siemens-Gamesa joint venture would overtake Denmark’s Vestas to become the world’s biggest wind farm manufacturer by market share, according to the report.

More transparent heating bills that are easier to understand could motivate more people to save energy and lower Germany’s yearly CO2 emissions by 1.7 million to 3.3 million tonnes, according to a study by the Institute for Applied Ecology (Öko-Institit) and energy saving consultancy co2online for the Federal Environment Agency (UBA). The researchers recommend standardised bills which include information on the energy efficiency of the building, a comparison to previous years, as well as the possibility to transfer the data electronically. All the information needed for the proposed billing system is already available, but is not used. Average households could lower their heating costs by between 25 and 50 euros per year with the new bills, which would cost an additional 15 euros, according to the researchers.

Find a summary of the study in English here.

Only 0.7 percent of cars registered world-wide were electric vehicles or plug-in hybrids - the same share as in Germany, according to the Center of Automotive Management (CAM). “By e-car market share, small countries like Norway and the Netherlands are way ahead, where 23 and 10 percent of new car registrations were e-cars,” according to the CAM. Sweden, Denmark and Switzerland are also clearly above the West European average of 1.4 percent.

Find a summary of the study in German here. 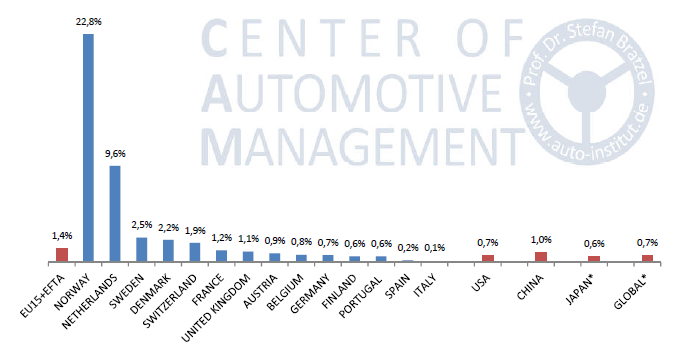 A year ago, five municipalities in the Ruhr region bought utility conglomerate Steag and wanted to make the energy company more renewable, writes Marcus Meier for klimaretter.info. Steag is the fifth largest utility in Germany and entirely owned by the state. But the participating cities of Dortmund, Essen, Bochum, Dinslaken and Oberhausen are criticising the utility’s lack of transparency. Instead of investing into renewable energies, the Steag management wants to invest billions of euros into waste incineration plants and has even shown an interest in buying Vattenfall’s lignite assets in eastern Germany, the article says.