The German federal parliament (Bundestag) has voted by a large majority to transfer liabilities for storing nuclear waste to the state, the Bundestag has stated in a press release. The legislative proposal introduced by the government stipulates that nuclear plant operators will be charged with the costs for decommissioning and dismantling plants, as well as safely packaging the radioactive waste by paying up to 23.6 billion euros into a state fund. Members of parliament called on the federal government to demand that utilities abandon lawsuits in which they claim compensation for Germany’s accelerated nuclear phase-out triggered in 2011. Economy minister Sigmar Gabriel said “this can hardly be brought about” by the federal government. The Council of the German federal states (Bundesrat) will likely vote on the bill on Friday.

“The winner is Gabriel”

The new bill on the responsibility for the disposal of nuclear waste, passed by the German Bundestag on Thursday, is a “step of historic proportions” for the federal government, writes lawyer and expert in energy law Olaf Däuper in a guest commentary in Handelsblatt. It was a compromise where the state and the nuclear suppliers made a big step towards each other and “contributed to restoring peace in the deep divides between the nuclear-sceptic civil society and the atomic corporations”, writes Däuper.

German economy minister Sigmar Gabriel’s attempts to negotiate a postponement for German carmakers to implement China’s new mandatory e-car quota have been in vain, Christoph Giesen and Max Hägler write in Süddeutsche Zeitung. Beijing is determined to put the regulation into effect in summer 2017 despite numerous objections from the industry, they write. Not only will foreign carmakers be obliged to fulfil the quota, their compulsory Chinese joint-venture partners must also electrify a prescribed share of their car production, according to the authors. “In reality this means that construction plans have to be handed over – down to the last screw,” Giesen and Hägler say.

For background read the CLEW dossier The Energiewende and German carmakers.

The constantly growing engine performance of newly registered passenger cars in Germany is largely caused by the popularity of powerful SUVs, Thomas Fromm writes in Süddeutsche Zeitung. “Carmakers don’t build the cars which per se are the most environmentally friendly, but those which the customer wants,” Fromm says. BMW, Daimler, VW and the others build large cars because many people “want to be seated high above the ground with a strong engine underneath them”, “despite knowing that smaller would be better”, he writes.

“Climate target almost out of reach”

The environment ministry’s new Climate Protection Report showed that the 2020 emissions reduction target of 40 percent could only be reached if the German economy collapsed, writes Michael Bauchmüller in Süddeutsche Zeitung. “In theory, the German climate target for 2020 can still be reached: The economy would need to properly collapse and the export of coal power would need to decrease significantly. Voilà, we would have 40.4 percent less greenhouse gas emissions,” writes Bauchmüller.

Eastern German state premiers are urging the federal government to agree quickly on planned legislation to standardise electricity grid fees across the country, writes Albert Funk in Der Tagesspiegel. In a letter to the Chief of the German Chancellery Peter Altmaier, the premiers say that there were “massive reservations and concerns” against the draft, indicating opposition by western federal states, writes Funk. Consumers in rural areas with strong renewable development currently pay very high fees. This is the case mostly in eastern German states. The resulting higher electricity prices led to unfair competition conditions and an “economic disadvantage” for eastern states, write the premiers in their letter. The draft bill is currently debated among the relevant federal ministries.

For more information on the Energiewende’s transmission infrastructure, read the CLEW dossier The energy transition and Germany’s power grid.

Thuringia, the state of Berlin, and Rhineland-Palatinate are the German pioneers regarding sustainable mobility, according to the Federal State Index Mobility and Environment 2016/17 by Allianz pro Schiene, Friends of the Earth Germany (BUND) and the German Road Safety Council (DVR). The index compares the federal states’ policies and statistical data on sustainable transport according to the indicators safety, noise, land usage, climate protection and air quality. The federal state of Hamburg is in last place. 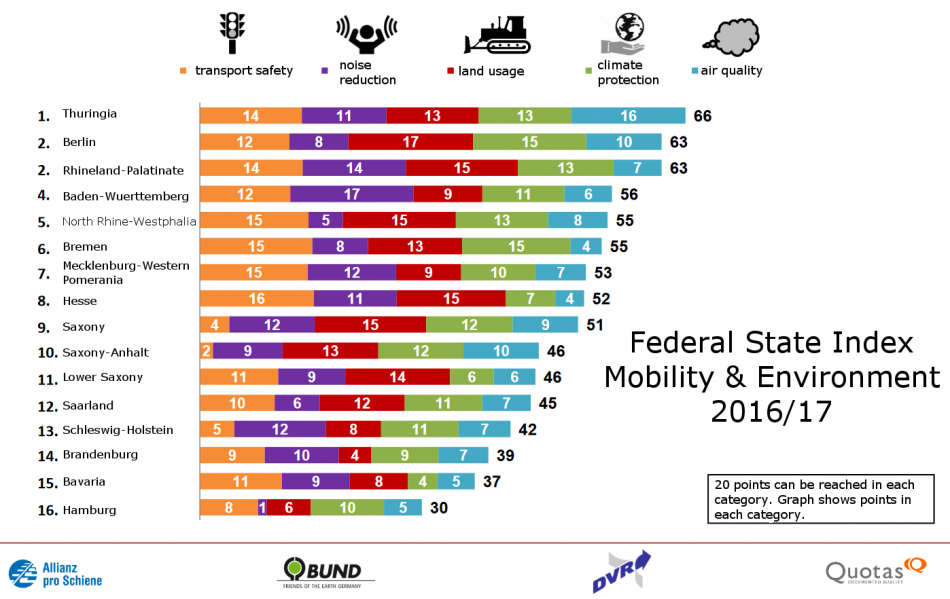 For background, read the CLEW factsheet German federalism: In 16 states of mind over the Energiewende.

“Dante’s inferno in the Hambach forest“

The protest against lignite mining in the western German state of North Rhine-Westphalia turns increasingly violent, writes Reiner Burger in Frankfurter Allgemeine Zeitung. In the area of the open pit lignite mine Hambach, “a small group of self-proclaimed climate protectors becomes more and more radical” and has resorted to violence against the police and employees of the German utility RWE, writes Burger. The Christian Democrats and Free Democrats in the state parliament call for the eviction of the protest camp in the Hambach forest.

Essen district court has rejected a lawsuit brought by Peruvian farmer Saúl Lliuya’s against German utility RWE, for contributing to environmental damage in his hometown of Huarez, news agency Reuters reports. Lliuya demanded 17,000 euros in compensation to finance safety measures taken against the threat posed to his home by a melting glacier. RWE’s carbon emissions were partly responsible for the threat, according to Lliuya’s claim. RWE rejected the claim, saying a single emitter could not be held accountable for global developments such as climate change. German environmental organisation Germanwatch, which supported Lliuya, said while the court saw no “legal causality” justifying the claim, it conceded there could be a “natural scientific causality.” According to Germanwatch, Lliuya’s lawyer is considering filing an appeal with the higher regional court at Hamm.