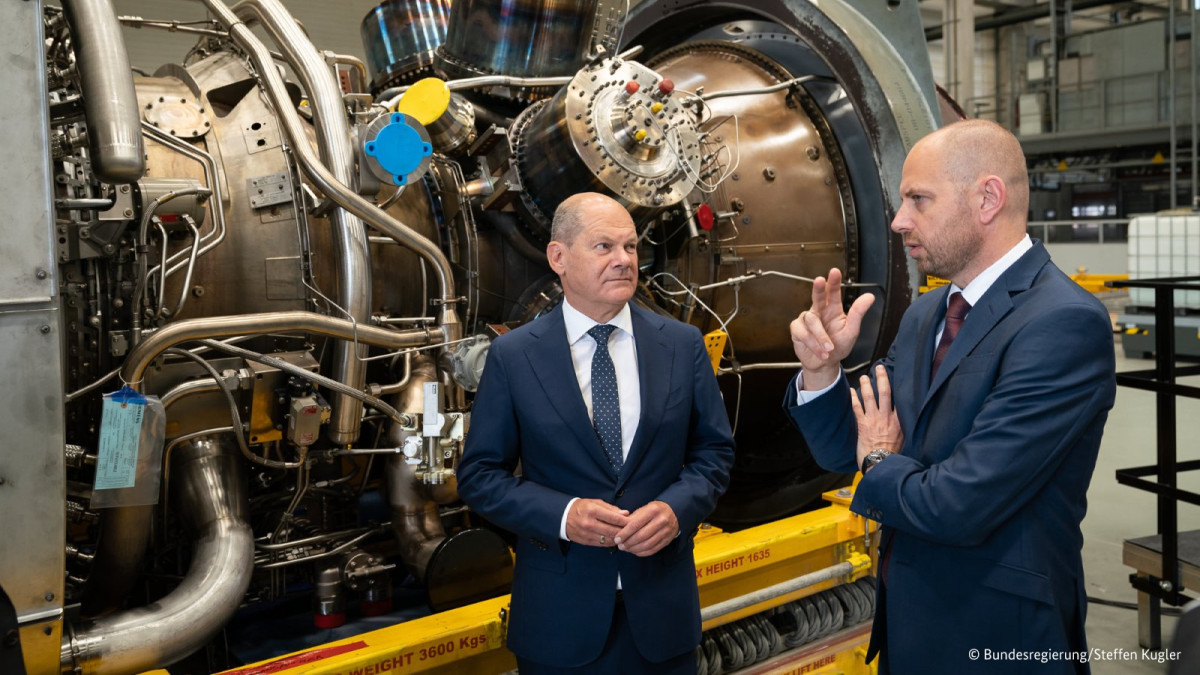 Russia is ready to use “pretexts and invented reasons” to obstruct Europe’s energy supply, German Chancellor Olaf Scholz has said as his government prepares for a possible full halt to natural gas trading with the country’s most important supplier. “No technical reasons” stand in the way of bringing the key pipeline Nord Stream 1 back to full capacity, the chancellor said during a visit of a gas turbine at a factory of Siemens Energy that has been at the heart of a political row between Berlin and Moscow for several weeks. Scholz said gas trading with Russia could be ended entirely once Germany has built up its own LNG infrastructure. He said coal fired-power production was likely to increase considerably in the short-term but stressed that faster renewables expansion is the best long-term solution to alleviate energy supply challenges.

German Chancellor Olaf Scholz has said Russia is responsible for the current drop in gas trading between the two countries which is feared to be a possible prelude for an even larger reduction which would worsen the European energy crisis. During a visit at a Siemens Energy facility in western German city Mühlheim, where the engineering company currently stores a gas turbine that has been at the centre of the trade dispute for several weeks, Scholz said the turbine had been overhauled successfully and “is ready for use at any time”. The chancellor sought to counter claims by Russian state-owned gas company Gazprom that the machinery is not operational and therefore to blame for lower gas flows through the offshore pipeline Nord Stream 1, which currently stand at about 20 percent of full capacity.

Scholz stressed that there are “no technical reasons” for delaying the turbines deployment and that the current economic sanctions levied on Russia by western nations explicitly exclude gas trading. “Nothing is standing in the way of transporting this turbine to Russia” – “someone just has got to say ‘I want to have it’,” said the Social Democrat (SPD) chancellor, adding that all necessary licensing and paperwork had been obtained to move the machinery to its usage site.

Gazprom in June said Siemens Energy had failed to return the turbine on time after routine maintenance works in Canada, thereby justifying its reduction of reduced flows through the key offshore pipeline, after Russia already reduced or halted flows to Europe through two other pipelines via Poland and Ukraine. Initially, Canada had not allowed the return of the turbine, before granting a time-limited permit. Scholz thanked Canada’s government “for their readiness to help Germany”. Canada had played an important role in showing that Russia’s government is bluffing and no technical reasons for the turbine’s delayed deployment exist.

The cut in gas flows has led to severe concerns about a possible full halt of gas trading between Russia and Europe, a move that could upset German and European gas storage plans for the coming winter and lead to shortages and supply rationing of the fossil fuel.

A Siemens spokesperson said the company could find no discernable technical reason why Gazprom is using only one of the five operational Nord Stream 1 turbines that are already in Russia, adding that delivery of the additional turbine currently stored in Germany could be carried out immediately. The company said it would continue to uphold the dialogue with Russian gas provider Gazprom but opinions on the turbine’s functionality would continue to differ.

Chancellor Scholz said there could be political “pretexts and invented reasons” by Russia as to why the turbine cannot be imported, adding his visit to the Mühlheim site is meant to “de-mystify this debate and to show everyone that this turbine exists and is ready for use”. He added that the German government now had to assume that Russia will not abide by existing trade contracts, calling Moscow’s position “a difficult message sent by Russia for its own future” if the country ceases to be a reliable trading partner. “All this has no reasonable background,” Scholz said.

"Many" coal plants to resume operation in next months

He confirmed the government’s position that the parallel offshore pipeline Nord Stream 2 will not enter into operation, arguing that Nord Stream 1 and other existing pipelines would have enough capacity to cover demand if they were fully used. Scholz said the government had prepared for a full halt to gas flows from Russia already since before Moscow launched its invasion of Ukraine in February this year, allowing the country to quickly implement “a complete turnaround with respect to previous gas trading relations with Russia”.

All gas demand could be covered from other sources, notably through liquefied natural gas (LNG) shipments once the country has built up its own import infrastructure, even if this would possibly entail “high prices” for the fossil fuel that is mainly needed for heating buildings and industrial manufacturing processes. The first new LNG terminals on Germany’s northern coast would be ready no later than early 2023.

With a view to alternatives to natural gas in keeping Germany’s energy system stable, Scholz said he assumes that “many” hard coal plants would resume operation in the next months and provide energy for heating and electricity production wherever possible. However, besides reduced gas flows, a slow roll-out of renewables - for example wind power in Bavaria - and grid infrastructure would also be to blame for current supply bottlenecks, the chancellor added.

A possible runtime extension for the country’s three remaining nuclear plants, which had been called for by several EU partners, would hinge on the results of a so-called stress test conducted by the economy and climate ministry that is meant to assess whether and how the reactors could alleviate possible grid stability issues brought on by the current supply crunch for gas. Scholz stressed that Germany currently helps out other EU countries who are struggling to cover their electricity needs with excess power generated in the country. The electricity surplus in Germany is partly thanks to high renewable power production, which covered slightly less than half of all electricity production in the country in the first six months of the year.