A slowing economy and mild weather lowered Germany's energy demand significantly in the first quarter of 2020. Latest data also confirmed that renewable energy sources accounted for more than half of the electricity fed into Germany's power grid for the first time over a full quarter.

Lower demand, especially in energy-intensive industries, amid a slowing economy, warmer weather and the first effects of the coronavirus crisis have led to a 7 percent decrease in German energy use in the first quarter of 2020, said energy market research group AG Energiebilanzen (AGEB) in a press release. The coronavirus crisis effects are not yet strong in the first quarter, AGEB added. The group expects energy-related CO₂ emissions to have dropped by almost 11 percent compared to the first quarter 2019. Only renewables consumption rose (by 6 percent compared to the same period last year), while oil (-3.2 percent), natural gas (-5.5 percent) and nuclear power (-17 percent) consumption fell. Coal saw the biggest drop, mainly due to the electricity sector. Due to more renewables feed-in, planned shutdowns and decreasing demand due to the pandemic, coal-fired power production fell significantly. Overall, hard coal use dropped 22 percent, while lignite use plummeted 30 percent.

Latest data from statistics office Destatis showed that in the first three months of 2020, renewable energy sources accounted for the first time ever for more than half of the electricity fed into Germany's power grid. Wind power became the most important source with a share of around 35 percent of the electricity produced, Destatis data showed, confirming earlier estimates by utility association BDEW. 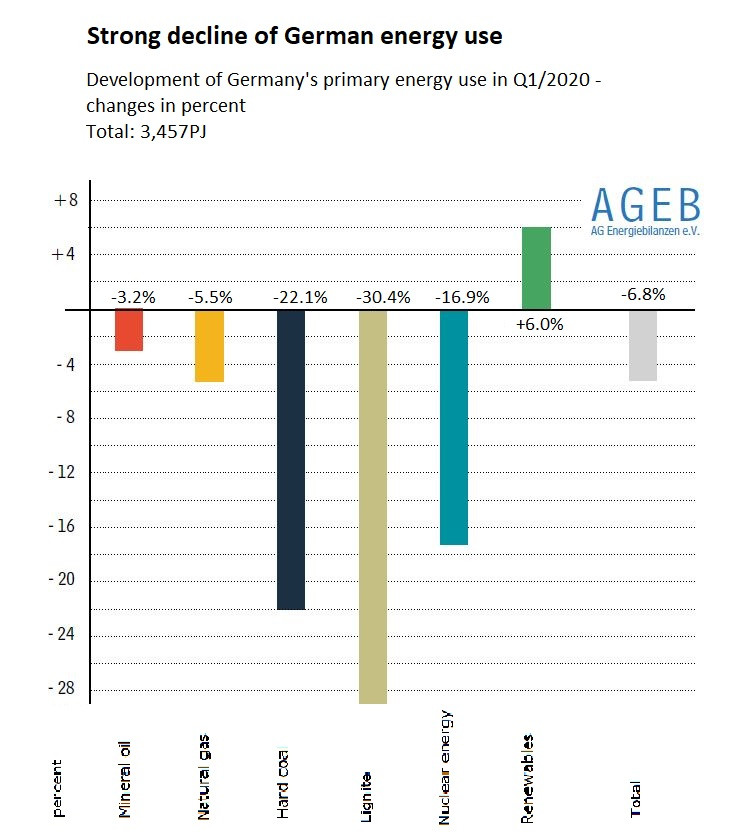