The Social Democratic Party (SPD) wants to develop a national climate protection law and introduce a CO₂ floor price, the party says in a first draft for the federal election campaign programme. "We will continue to develop European emissions trading as a key instrument to protect the climate and introduce a minimum price for CO₂," the draft states. The party’s leadership will further discuss the draft and decide it on 22 May. The final programme will be decided at the federal party conference on 25 June. Other key provisions on energy and climate policy include:

Find the draft in German here.

For background on the federal elections read the CLEW dossier Vote2017 - German elections and the Energiewende.

Chancellor Angela Merkel has angered her coalition partner SPD (Social Democratic Party) with her statement that Germany will probably miss its target of bringing one million electric cars on to the roads by 2020, writes news agency dpa. Economy minister Brigitte Zypries and environment minister Barbara Hendricks told dpa that e-mobility was “of outstanding importance” for the country’s industry and environment. They said the government should not give up targets, but rather ensure that Germany becomes a leading market.

“No additional household energy savings in 2015”

German households consumed 2.1 percent more energy in 2015 than in the year before, Germany’s Federal Statistical Office (Destatis) said in a press release. “The increase was observed for all energy sources except electricity,” it explained. Seventy percent of energy consumption was related to heating. A greater number of households [up 4.8 percent] and cheaper prices for gas and oil might have contributed to the increase, according to Destatis. In general, household energy consumption “for housing purposes” has decreased by 5.7 percent since 2005, it added. 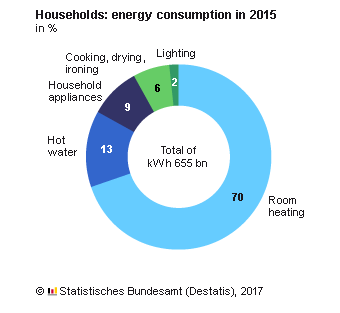 The construction of the natural gas pipeline Nord Stream 2 from Russia to Germany – scheduled to start this year – could be put back by months or years. The delay could be caused by plans by the EU Commission to negotiate a separate regulatory framework with the Russian government, reports Hendrik Kafsack for Frankfurter Allgemeine Zeitung. The Commission wants to determine if the offshore project has to adhere to EU energy market rules, which would ensure that other companies besides Gazprom get to use the pipeline, writes Kafsack. The German government and Gazprom had always argued that Nord Stream 2 was a purely business project, and did not need to be separately regulated by the EU.

For background read the CLEW dossier The Energiewende and its implications for international security.

More than 30 foundations from eight countries have initiated the Foundations Platform (F20) “to further shape the political discourse on future sustainability measures before, during and after the G20 summit” on 7-8 July in Hamburg. The goal is to promote the implementation of the Agenda 2030, climate protection projects, and the renewables expansion, as well as emphasising the role of civil society, writes German Federal Environmental Foundation (DBU) in a press release. Members include Stiftung Mercator, European Climate Foundation* and WWF.

*The Clean Energy Wire is a project funded by Stiftung Mercator and the European Climate Foundation.