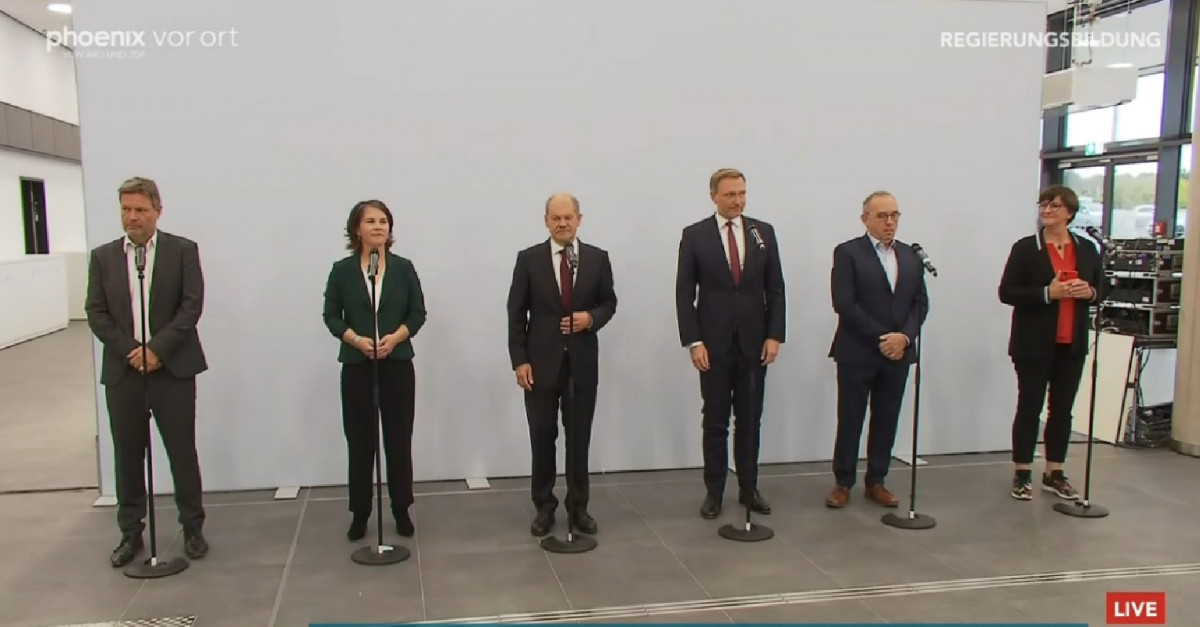 Three weeks after Germany’s election, the country is moving one step closer towards its first three-party government coalition. Following several days of intensive preliminary talks, the Social Democrats, the Green Party and the Free Democrats said they would seek to enter into formal coalition negotiations soon and strive to form a new government before the end of the year. All three parties stressed the amicable tone in the talks that could help the country to have a “fresh start” and pave the way for an ecologic modernisation of the economy that complies with climate targets. Most people in Germany strongly back the formation of a so-called “traffic light coalition,” but the start of formal negotiations still hinges on the consent of all relevant party bodies.

Germany is edging closer to the so-called “traffic light coalition” government, named after the party colours of the Social Democrats (SPD), the Green Party and the Free Democrats (FDP). Roughly three weeks after the federal elections, the parties announced they want to enter into formal negotiations to form a three-party government coalition and presented a document with preliminary agreements.

“It has worked – we’ve agreed on a paper that serves as the basis for negotiations,” SPD chancellor candidate Olaf Scholz said after a week of informal but intensive talks between the parties that were meant to tackle the most controversial questions before formal consultations begin. Scholz, who as candidate of the biggest party would lead the coalition government as chancellor, stressed that the talks with Greens and the FDP had been “trustful and constructive” and could pave the way for a true “fresh start” for the country.

A key pillar of the new government would be “the biggest industrial modernisation project in probably more than 100 years in Germany,” Scholz said. This modernisation should at the same time help to halt climate change and keep Germany’s industrial strength intact by massively ramping up renewable power generation and “do without fossil resources altogether as soon as possible.”

The 2021 election by many observers had been labelled as a “climate election” due to the high importance many voters had given the topic in the run-up to the vote. Severe droughts in the past years already had given rise to mass protests for more ambitious climate action and deadly floods hitting large parts of western central Europe in the summer only reinvigorated concerns that the country is neither prepared for nor doing enough to curb global warming. From managing the phase-out of coal power over more ambitious carbon pricing and the transformation to electric mobility, the next government therefore will have to enact a wide range of emissions reduction efforts that some fear could lead to social tensions if no adequate compensation and burden-sharing mechanisms are found.

In a paper outlining the results of their informal talks, the “traffic light coalition” parties gave an indication how they plan to address the most pressing tasks in climate and energy policy (see full list below). In order to meet the recently tightened target of climate neutrality by 2045, it would be necessary to accelerate the phase-out of coal-fired power generation and ideally complete it by 2030, they said. Moreover, the parties want to abolish climate damaging subsidies, which still amount to billions of euros every year, make rooftop solar panels the standard for all new buildings, set a target of reserving two percent of the country’s land area for wind power and abolish the renewables surcharge to finance expansion by replacing it with new sources of funding.

Green Party co-leader Annalena Baerbock said the informal talks had helped to bridge divides and find common ground to initiate “a decade of renewal” for Germany. She said every party had to concede something in the talks in order for the trio “to tackle the big questions” together. This would include the joint will of all three potential coalition partners to make climate justice and a more environmentally friendly economy a core principle of Germany’s and Europe’s economy while retaining its competitiveness.

Her fellow party leader Robert Habeck added that every party had to accept “impositions,” for example the Greens had to agree that no general speed limit will be introduced on German motorways. “But we’re very content with other aspects” of the talks, Habeck said, arguing that a coalition treaty that enables Germany to still comply with the Paris Agreement’s goal of limiting global warming to 1.5 degrees Celsius could very well be possible.

Christian Lindner, head of pro-business party FDP, also pointed out that a “very special tone” had accompanied the talks so far that has made “new political fantasies” possible. He said reconciling the three parties’ often markedly different political positions would mean a possibility for true social change that had not been thinkable “in a very long time.” He stressed that his party would continue to insists on “clear financial guardrails” and fiscal discipline but that the three partners had agreed to unlock “all private and also public” investment potentials to ensure that Germany becomes “a decarbonised industrialised nation.”

No other party constellation would be a better fit for this endeavour, Lindner said, adding that the goal was to establish “a renewed socio-ecological regulatory framework.” At the same time, the goal would be to push for a digital makeover and reducing bureaucracy and a relief from excessive costs for citizens, for example regarding power prices.

After their leaders’ agreement, the parties now still have to agree internally on starting formal coalition negotiations. SPD candidate Scholz said he hopes this step could be completed at the weekend and reiterated that his goal was to form a government before the end of the year. In a poll released by public broadcaster ZDF on the same day, a “traffic light coalition” government was by far the preferred option for most respondents, with 62 percent backing it and 19 percent opposed.

Key climate and energy results of the coalition talks